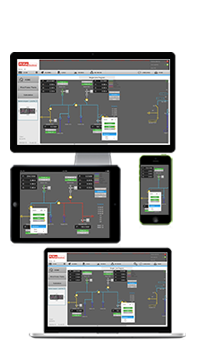 The Grenoble Alpes University Hospital’s technical teams wanted to be able to instrument and control various equipment quickly, inexpensively and without cabling (Ethernet and power).

The Grenoble Hospital asked Adeunis and ARC Informatique the question of how to best solve this operational challenge.

In addition, the Hospital expressed the wish to do this with their existing BMS software without adding additional software layers.

PcVue supervision published by ARC Informatique, is the BMS in charge of managing two of the hospital’s sites, the GTB and the GTE site.

The first step, of this project consisted of a LoRaWAN radio coverage study of the site.

This study, done by the Adeunis team, who are experts in this field, made it possible to identify the best location of the LoRa antenna, to ensure the zones (floors, buildings, parking, and so on) are correctly covered to allow desired positioning of the Adeunis IoT sensors.

The LoRaWAN architecture makes it possible to set up a private network, specifically in indoor and deep indoor configurations, while taking advantage of the radio coverage of LoRaWan’s “Long Range” network.

Indeed, only one antenna at the top of a building (15th floor) can cover almost all buildings on the site but also reach a second site about 6 km away.

The cost of the network infrastructure is therefore very small when compared to a WiFi solution.

After the preparation and installation of the LoRaWAN infrastructure by the Adeunis team, the Adeunis “Pulse” IoT sensors were installed to measure water meter readings on numerous external locations of the Grenoble University Hospital.

Other sensors detect drifts in temperatures in sensitive locations such as drug storage areas.

The integration of the LoRaWan network at the heart of the GTB PcVue solution allows feedback from sensors used with the existing BMS supervision.

The “raw” data of the sensor (Temperature, On / Off) is enhanced by the power of PcVue to enrich and treat this data including, creation of threshold, alarms, mimic, curves and archiving.

Integration of IoT equipment maintenance data is also implemented with monitoring of remaining battery life of sensors and sensor position in the building.

This project thus provides the operator with significant savings both in commissioning and in operation of the Hospital facilities.

Furthermore, the installation of the LoRaWAN infrastructure allows development of many new services through additional sensors integrated with PcVue’s data treatment features.

In conclusion, these GTB hybrid solutions, allowing both the control of standard automation equipment and simplified instrumentation thanks to the use of Adeunis IoT technologies, are clearly part of a modern and innovative approach.

This technological partnership between Adeunis and ARC Informatique will solve many use cases in other sectors such as infrastructure, water, environment or the industry of the future, sectors where these two players have already acquired strong expertise.