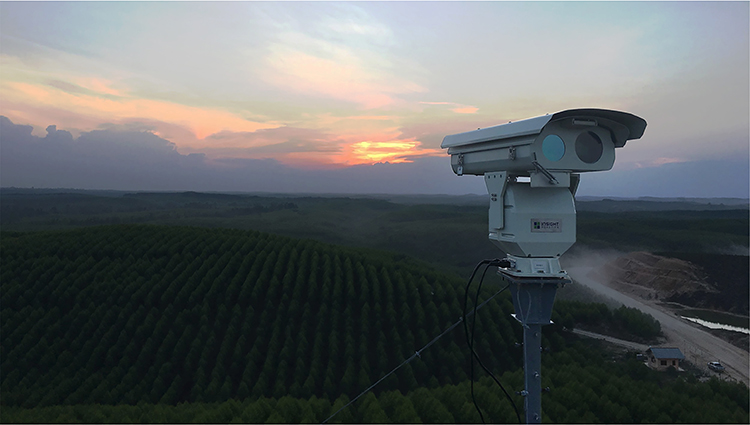 Insight Robotics has expanded its operations in Mexico, Portugal and Spain through a number of strategic distribution partnerships.

Insight Robotics is a Hong Kong company which provides technology to safeguard natural resources and infrastructure through automation and early-warning threat detection.

The company’s new partnerships include:

The first five wildfire detection robots – which are basically intelligent security cameras (main picture) – have been installed in the main forest in Guadalajara, the second largest city in Mexico.

The robots are currently being monitored by state and federal authorities controlling forestry, an institution that provides assistance and resources at the national level – throughout 32 states.

The potential for replicating the project across the State of Jalisco and at the national level is high.

Meanwhile, the Portugal’s demonstration was carried in March at the Europe’s largest laboratory for wildfire studies, LEIF (Laboratorio de Estudos de Incendios Florestais) and got national exposure and attention to Insight Robotics Early Wildfire Detection system to the Portuguese stakeholders, policy and key decision makers, as an effective solution to counter the recurring threat of wildfires that the country has been battered with.

The demonstration had a dedicated reportage in the major TV news channel in Portugal (SIC).

Professor Domingos Xavier Viegas, professor of the University of Coimbra, who is the highest technical and scientific authority in Portugal related to wildfires, says: “Portugal doesn’t have a culture of video surveillance of the forest and the big fire of Pedrogao Grande in June 2017 showed the benefit of video surveillance.

“Insight Robotics Wildfire Detection system enables not only the detection and location of the fire, but also a great added value with lots of information to the firefighter such as providing the best path towards the fire, monitoring several fires simultaneously from a Command and Control Center.”

In the wake of the demonstration, Portugal government has enacted a regulation that installation of forest video surveillance systems, integrating with RGB and thermal cameras is mandatory for mitigation of wildfires.

Kevin Chan, co-founder and CEO of Insight Robotics, says: “To-date, more than 100 wildfire detection robots have been deployed in 44 cities in China, and Indonesia.

“Besides Portugal, we have successfully conducted demonstration/proof-of-concept worldwide, including in China, Indonesia, Malaysia, Cambodia, Canada, Brazil and South Africa.

“The successful delivery of the first project in Mexico and the demonstration in Portugal is our first and significant step to enter these two regions.

“We are thrilled to have Robotics Galu and Leitek as our distribution partners. We are looking ahead to enhance business through this strategic partnership and secure a competitive edge in Mexico, Portugal and Spain markets.”

Engineer Clelio Dinis Leite, CEO of Leitek Innovative Solutions, says: “This is an exciting partnership for Leitek. The products of Insight Robotics are arriving at the right time in Portugal in the wake of 2017 wildfire disasters.

“We believe it would be a big success in both Portugal and Spain.”