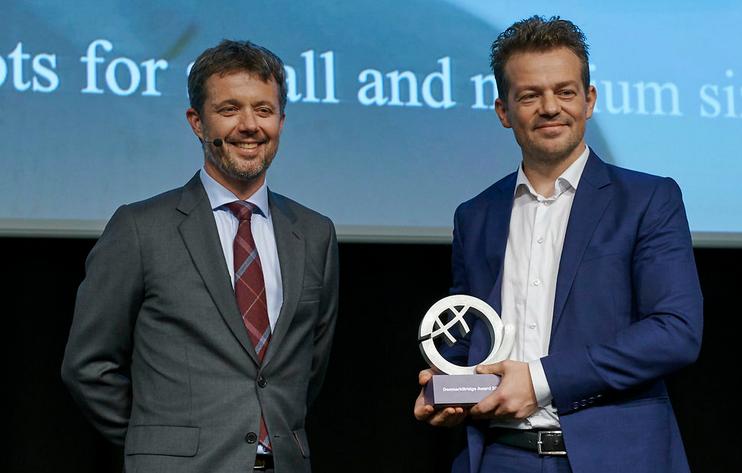 Universal Robots received the DenmarkBridge Award 2018 from His Royal Highness Crown Prince Frederik at the Annual Meeting of The Danish Growth Fund.

The DenmarkBridge Award celebrates companies, organizations or individuals who have shown an ability to think bigger and aim for the unreachable.

The competition for the Award was tough, and among the many nominees, four went on to the final. Besides Universal Robots, the finalists were Netcompany, Joe & The Juice and Muuto.

The criteria for selecting the winner were: ambition – demonstrating a moonshot mindset with the capacity for changing the way we think and behave; innovation and technology; commercial impact; and network effect: connecting people and/or organizations between the United States and Denmark.

“Here we have the story about three friends from university, who started up a company with the purpose of making robot technology available for small and medium sized businesses,” said Christian Motzfeldt, chairman of DenmarkBridge.

“Today, 15 years later, Universal Robots is a world leader within cobots. Universal Robots also plays an important role in creating a robot cluster on the island of Fyn. This cluster has generated more than 3,000 jobs.

Universal Robots wins the DenmarkBridge Award 2018 because they have shown a consistent perseverance and high ambitions, leading them to the success, they are today,” he added.

“We were also nominated last year, but now we finally won! It is a symbol of the journey we have been on, and the goals we have achieved; to build a global company and being instrumental in creating the growing robot cluster in Odense. Reaching these two goals makes us very proud,” he added.