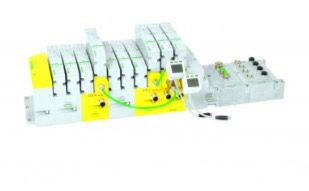 This enables the creation of up to three independent electro-pneumatic safety zones, while also allowing independent non-safe sections to co-exist within one valve island assembly.

Alternative solutions enable the isolation of one zone only per island.

The zoned safety approach helps the design engineer satisfy the Machinery Directive 2006/42/EC and comply with ISO 13849-1 while eliminating the components and complexity commonly found in existing safety circuits.

Scott Weickel, vice president of engineering for machine automation applications at Emerson, says: “With this functionality, the original equipment manufacturer and end user can easily and cost-effectively configure up to three safety circuits in a machine using a single ASCO Numatics Series 503 valve island with G3 fieldbus electronics.

The ASCO Numatics zoned safety valve island ensures the operator does not have to shut down the entire machine by releasing compressed air with a redundant safety/control dump valve.

Instead, the valve island can be configured to shut down pilot air and power only to the group of valves that controls the machine’s motion in the operator’s vicinity.

Weickel says: “Because zoned safety capability is designed into the standard ASCO Numatics Series 503 valve island platform, no redesign is required and the user has optimal choices when selecting valve options, accessories, and flow requirements.

“The flexible approach also significantly reduces safety system cost and enables valuable machine space to be saved for other purposes.”

The ASCO Numatics zoned safety valve island has been evaluated by TÜV Rheinland (Report No. 968/FSP 1228.00/16) and is compatible with category 3 PLd.