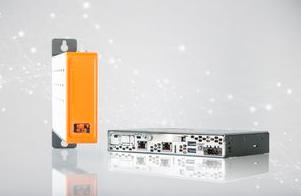 Thanks to B&R Hypervisor, the Automation Runtime real-time operating system can run simultaneously alongside Windows 10 IoT Enterprise or Linux. The Automation PC 2200 is suitable as an IoT gateway or as a fully-fledged edge controller or edge device.In its box PC format, the Automation PC 2200 can be equipped with an optional SDL4 interface. This digital transmission technology allows HMI panels to be operated at distances of up to 100 meters.

All variants of the Automation PC 2200 are free of fans and other rotating parts, making them completely maintenance free.

Other standard features include two Gigabit Ethernet interfaces and two USB 3.0 ports. Fieldbus connections like POWERLINK and CAN can be configured individually. Compact CFast cards with up to 256 GB are used for data storage.