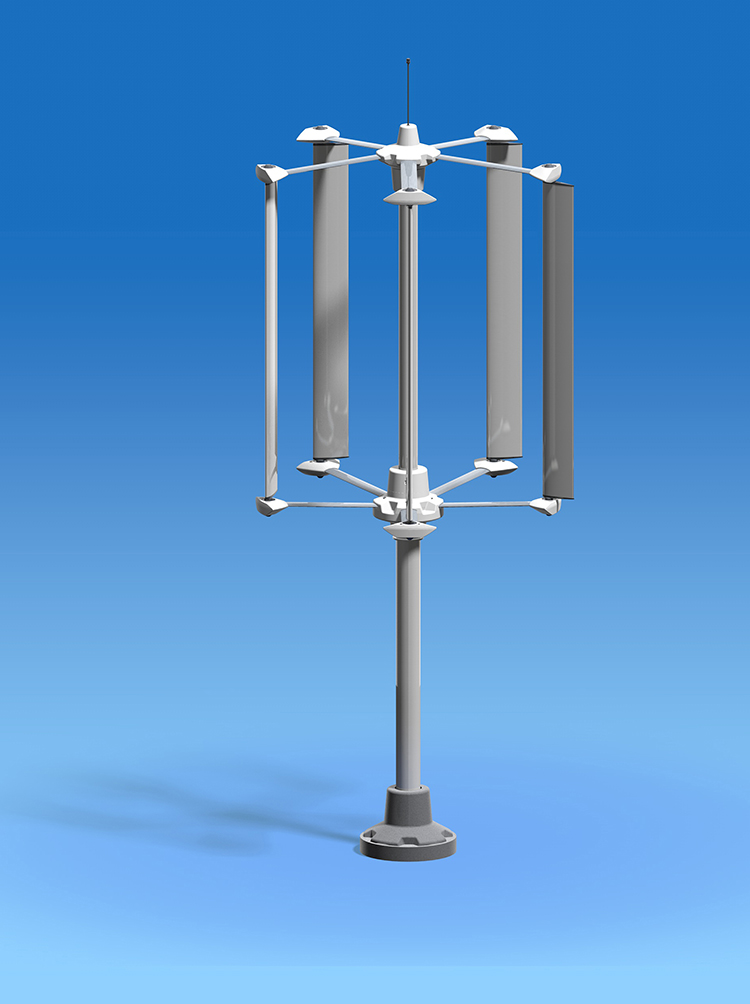 Heason Technology, the leading motion systems designer and manufacturer, has worked closely with STGES’s engineers from the initial WindSurf design concept and through the project’s development stages – providing prototype systems and application support for a tightly synchronised six-axis EtherCAT system that manages all of the motion control, maths functions and I/O interfacing as a single stand-alone solution.

The basics for the WindSurf VAWT comprises five individual 6 metre high vertical aerofoils that are arranged and supported on upper and lower “spider arms” that drive the generator.

Each aerofoil’s angular pitch position is referenced and synchronised to the overall assembly’s rotation axis to create maximum rotation of the VAWT.

Imagine Ferris wheel physics but rather than the passive geometry of other VAWTs, where the blades assume position through wind pressure, the WindSurf´s aerofoils are positioned independently by a direct-drive servo motor and encoder to determine optimal pitch.

Furthermore, the angular position for each aerofoil is calculated and dynamically set in real-time from the motion controller using the complex algorithms predetermined by the STGES’s CFD software modelled control strategy.

Other system components include sensors that determine wind speed and wind direction whilst a rotary angle encoder on the WindSurf’s main shaft provides the control system with position and velocity feedback of the main rotor.

The central shaft also houses a slip ring assembly that delivers power and signal information from a ground station cabinet to the rotating platform, where the motion controls and servo drives are located.

Before explaining the motion system in more detail, it is useful to look at the way STGES’s WindSurf achieves its performance: Initially, the control system ensures that the VAWT’s active pitch aerofoils are positioned to create optimal starting conditions.

Put simply, this procedure uses the external sensors to gauge the wind speed and direction and then orientate each aerofoil in the same way that a sail would be sheeted-in to catch the wind.

As rotation begins, each aerofoil blade is then dynamically and independently adjusted for pitch angle to increase the VAWT’s speed.

As the WindSurf’s speed increases due to the continued resetting of each angular position, the aerofoil’s function actually change from a sail-like behaviour to that of an aeroplane wing where lift is generated.

In this way, the Windsurf assumes and maintains optimal speed to drive the turbine and generate power efficiently and continuously, even under variable wind conditions.

From the outset, for cost and performance reasons, it was considered important that the motion system would need to have the integral capability for complex maths rather than stream position and velocity information from a remote PC or another controller source to individual drives on the rotating platform.

To maintain the subtle changes in angular position in real-time, in line with wind characteristics and platform speed, servo update rates in the region of one millisecond are required.

There is also a requirement to provide data upstream – eventually to The Cloud for remote management of the VAWT.

With the main rotor considered an axis as far as the control system is concerned, its position and velocity is monitored by the AKD-PCMM to maintain full synchronization for the five AKD-N’s which drive KDM series frameless servo motors directly mounted on each of the five aerofoil shafts.

As a Kollmorgen Certified Channel Partner for Kollmorgen for the UK, Heason Technology has extensive expertise in industrial automation and research-based motion control application with the global motion equipment manufacturer.

The high performance yet extremely compact AKD-PCMM motion controller has the ability to control and tightly synchronise motion for up to 10 drive axes at update rates of 1 millisecond.

As an EtherCAT Master and with a single and scalable program development and set-up environment, the AKD-PCMM has extensive maths functions and interactive machine I/O capability.

For the WindSurf VAWT, this space-saving solution provided all of the functionality to take on STGES’s control strategy with the high-speed EtherCAT protocol communicating position commands to the servo drives and providing an external EtherCAT link for direct access.

Kollmorgen’s AKD-N servo drives in combination with the frameless KBM motors make an extremely compact package and have the further advantage of one-cable connection for both motor power and feedback interfacing – simplifying installation and reducing inventory costs. With a central power supply located on the stationary side, these high-performance drives are arranged on the rotating side of the WindSurf VAWT.

Heason Technology also supplies other equipment for WindSurf from other distribution partners.

The motion system is completed with the central shaft’s precise rotation and speed which is managed through an incremental encoder from Renishaw whilst a precision slip ring assembly from Stemmann transfers DC power for the drives as well as EtherCAT level communications through the rotating platform.

The WindSurf VAWT concept independently micro-positions its five aerofoil blades using a rigorous control strategy that has been developed by STGES’s engineers through extensive CFD modelling.

VAWTs do not require the smooth non-turbulent air that is essential for HAWTs and as such may be sited almost anywhere to take advantage of brownfield sites, industrial areas and even as infill for widely spaced HAWTs in open areas.

Heason Technology have now supplied several sets of motion equipment to STGES for prototype use as the WindSurf VAWT continues through its development.