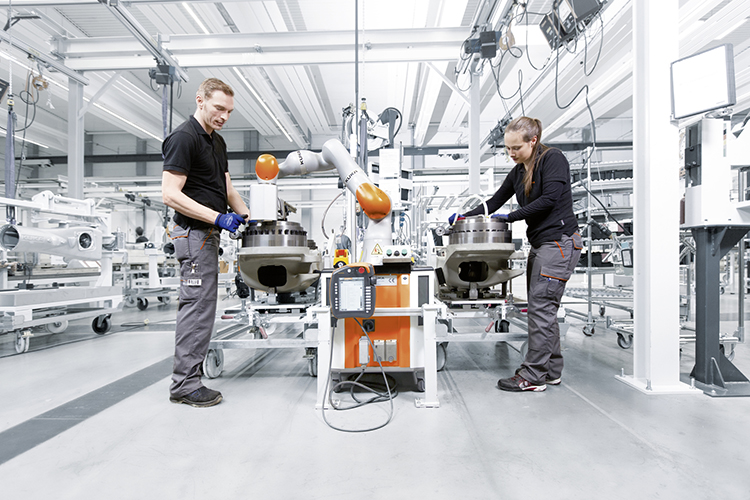 Automatica is probably the world’s leading showcase event for the robotics and automation industry.

This time around, Robotics and Automation News is highly pleased to announce that we are an official media partner for the biennial trade show.

Event organisers are previewing some of the main robotics innovations for smart production concepts that will be at the show next month.

The automation industry is booming, and robotics manufacturers are pushing forward with pioneering developments.

This will also be reflected at automatica 2018 on the grounds of Messe München from June 19 to 22.

The World Robotics Report 2017, published by the International Federation of Robotics, says that with an average robot density of 74 units per 10,000 employees (2015: 66 units), the global average in the manufacturing industry has reached a new record.

In an international comparison, Europe is in the lead with 99 units, followed by America with 84 and Asia with 63.

Germany is in third place behind South Korea and Singapore with 309 units in ranking the highest automated countries in the world.

The Koreans are no longer only robotics users, but also robot manufacturers.

At Automatica, the South Korean conglomerate Doosan is going to celebrate the European premiere of its robotics division.

According to initial information, solutions for human-robot collaboration will be the focus of its trade fair exhibition.

From the trade fair to the factory hall

How fast today pioneering robotics developments find their way from the trade fair to the factory hall is proven by Klara.

The collaborative robots from Universal Robots work in Audi A4/A5 assembly side by side with people without a protective fence.

The “adhesive application with robot assistance”, called Klara for short, provides valuable support for the installation of CFK roofs in the Audi RS 5 Coupé.

With it, Audi uses an MRK lightweight robot for the application of adhesive in final assembly for the first time in its main factory in Ingolstadt.

Similar robots are already integrated into production in bodywork construction as well as in engine assembly.

At Automatica, the topics of cobots and human-robot collaboration at robot manufacturers from all over the world will be the focus.

Kuka proves how far the most advanced approaches are here under the motto “industrial intelligence 4.0 beyond automation”.

Kuka has laid the foundation for sensitive and secure collaboration between man and machine with its LBR iiwa.

In the future, however, the robot is not only to assist in the industrial environment, but to develop itself into an everyday companion of people.

For this purpose, all interfaces must be simplified – regardless of whether for programming, commissioning, operation, analysis or service.

At Automatica, Kuka will show new solutions covering the range of cobots for industrial and general applications.

Stäubli is traveling to Munich with a colorful mix of innovations. The exhibitor will demonstrate its idea of digital-networked production at its trade fair booth.

Gerald Vogt, group division manager of Stäubli Robotics, says: “In fact, we are not shying away from any expense for Automatica and will show in a smart production line how robots and mobile robot systems produce components for tool change systems in direct interaction with people in an Industry 4.0 network.

“With that, we prove that production scenarios of the future can already be created today with Stäubli solutions.”

Another highlight will be the world premiere of a new Scara generation with completely encapsulated design and integrated wiring harness, in which Stäubli uses JCS drive technology known from six-axis robots for the first time.

Thanks to this technological leap, it is possible for the first time to realize a hygiene design for four-axis robots, which paves the way for new applications in sensitive areas such as the food, medical, pharmaceutical and cosmetics industries.

The factory of today and tomorrow, which requires individual solutions between full automation and manual work, is also a focus of the trade fair exhibition of Fanuc.

With its trade fair concept, Automatica provides an excellent opportunity to present the influencing factors in detail and clearly.

Important terms in this context: Field/Internet of Things, collaborative robots, and deep learning.

Ralf Winkelmann, CEO Fanuc Deutschland, says: “In Munich, we will show our idea of factory automation with various partners and based on practical applications.

“Automatica provides a platform for this like no other fair. The new Fanuc Scara series, the whole world of collaborative robots as well as other unique robot models such as the world record holder M-2000iA will be in the spotlight.”

To be able to cover the widest possible range of applications, the company has developed approx. 200 different robot models in the meantime.

Hybrid robot in practical use

Yaskawa will show continuous system and automation solutions at Automatica 2018. A highlight at the Japanese manufacturer’s booth will be two Motoman HC10 with a 1.2 m range and 10 kg handling weight.

These hybrid robots can be used both for standard and collaborative applications.

Equipped with an MRK gripper and a screw machine in MRK design, they will be mounted in a new demo cell bottle opener and distributed to the visitors.

The system is controlled via a Vipa touch panel from Yaskawa and is equipped with special, new safety mats.

The HC10 ensures the required safety in direct contact with the operator thanks to sophisticated, six-fold force and torque monitoring.

In Munich, Epson will point out its wide range of solutions from automation technology together with its partner companies.

The focus will be on the launch of the WorkSense W-01 dual-arm robot, which is particularly suitable for the production of individual products in a low number of pieces.

Volker Spaniard, head of robotic solutions, Epson Europe, says: “This dual-arm robot, which will celebrate its premiere at Automatica 2018, is not yet suitable for human-robot interaction in its current development stage.

“Thanks to its multisensory capabilities, however, we can qualify the machine very quickly for MRK applications. When we go this step will also depend on demand on the user side.”

In addition, new features of the T6-Scara and VT6-L six-axis series will be presented as entry models for inexpensive automation solutions.

Good work in the smart factory

VDMA Robotics + Automation is dealing with an important aspect in robotics and Industry 4.0 euphoria at Automatica.

The special exhibition “Man in the Smart Factory” will address current questions:

“As a result, jobs become more ergonomic and more interesting than ever before.”

Whoever wants to know why people remain pivotal in the digital factory should not miss a visit to the special exhibition in Hall B4.