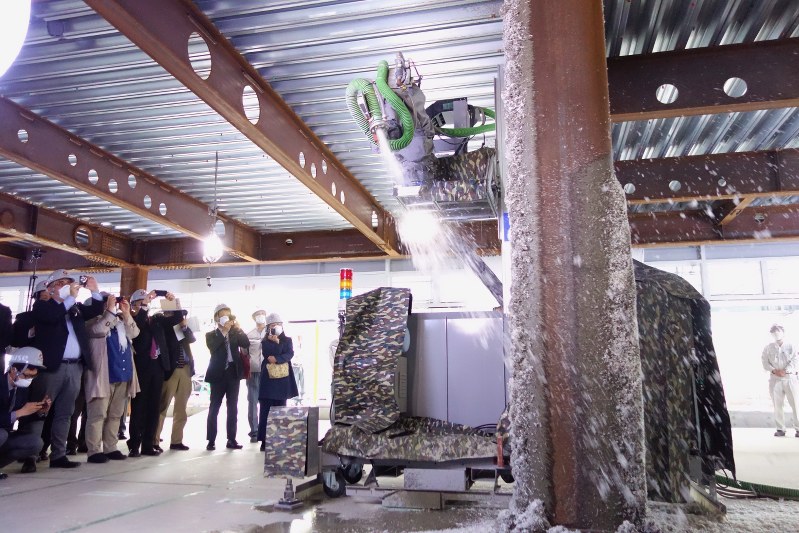 A Japanese company called Daiwa House Industry has been demonstrating a robotic system which can help in the construction of houses and buildings.

The robot appears to work by spraying layers of plaster on metallic structures, which themselves could be constructed by a robot – as can be seen in the image on Mainichi.jp.

It seems to work along similar lines to a robotic construction system developed by researchers at ETH Zurich, in Switzerland.

The main task it is designed to perform is to spray fireproof coating on a building – something which is said to be one of the most difficult parts of construction.

Daiwa House, which has so far invested almost $1 million into developing the system, plans to put it into operation sometime next year.

Head of technology Kazuto Tsuchida says: “It is expected the construction industry will face a shortage of 1.12 million workers in 2025.

“There are major expectations for robots, and we hope this will lead to high quantity production.”

This is not the only area of robotics Daiwa House been researching. The partners with Cyberdyne, which builds robotic exoskeletons, to supply the latter’s “HAL” exoskeletons.

The exoskeletons are designed to provide assistance to caregivers to the elderly (see picture below).

Daiwa House is Japan’s largest homebuilder, and also has interests in many other design and construction sectors, including in the building of care homes for the elderly.

The company’s annual revenue is more than $20 billion and it employs approximately 30,000 people.