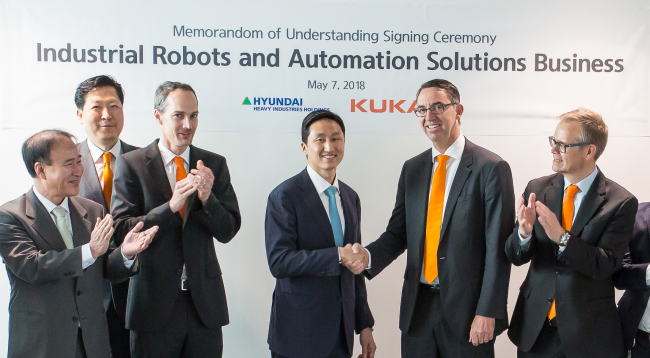 Hyundai Heavy Industries has reached an agreement to supply Kuka industrial robots and other products to manufacturers and other industrial companies.

This is according to a report on the website of the Korea Herald, which says the agreement is for HHI to market Kuka products to “large Korean manufacturing firms”.

South Korean industry is dominated by what are referred to chaebols, which means very large conglomerates, and gaining access to them is probably quite difficult.

However, chaebols – or at least supermassive powerful companies – exist in most countries, including the US, where a “winner-takes-all” culture has emerged on the internet.

Such companies usually diversify quite quickly. All of the above companies now have a variety of business units which each generate hundreds of millions of dollars in revenue.

The Korea Herald reports that HHI and Kuka have set a target of selling approximately 6,000 Kuka industrial robot products by 2021.

The thinking is that most of the customers will be from the electronics manufacturing sector.

HHI recently spun off its own robotics unit into a separate business, so it will be interesting to see how the partnership with Kuka fits into to the structure.

Hyundai Robotics produces large robots which may be used in shipbuilding, which is a sector Hyundai is a market leader.

HHI and Kuka are said to be planning to research and develop new industrial robots as well as manufacture existing Kuka products in South Korea.

A spokesperson for HHI told Korea Herald: “Through the partnership with factory automation leader Kuka, we hope to expand our sales and technologies into small robots that are not currently produced.”