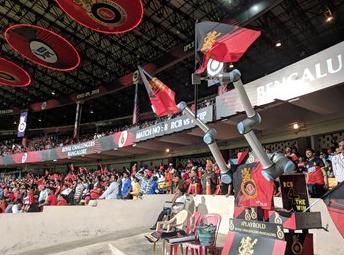 As cricket fever is spreading across India, VIVO Indian Premier League 2018 is taking the game and excitement to the next level by introducing collaborative robots to cheer Team RCB.

The Universal Robots cobots are engineered and programmed by MAC Machine Tools and Automation, a 27-year-old Bangalore-based firm.

Being synonymous with technological advancements and innovations, Bangalore has yet again proved that it is leading the technology space by integrating robots and entertainment seamlessly.

Mr. Pradeep David, General Manager, Universal Robots – South Asia, said “Cricket being a rage in India, we are delighted to see our cobot participating in IPL 2018. It was a path-breaking opportunity for us to explore an unconventional field.

“This new generation of lightweight robotic arms are now moving to sectors beyond the automotive and it’s a terrific experience to see them showing up some pretty unusual applications.”

“Since 2008, IPL has only gotten bigger, better and exciting. This year we are excited to be a part of VIVO IPL by introducing our robotic solutions into the cricket league,” said Mr. J Nagarajan, Managing Director – MAC Machine Tools and Automation.

“Our company is offering cheer-leading and bar-tending applications to team RCB in partnership with Universal Robots.”

Amidst high-tech entertainment, madness, support and the joy of fans, team RCB witnessed a cobot cheering for them. These cobots were introduced for the first time in IPL on 13th April 2018 where RCB took on KXIP at Chinnaswamy Stadium.