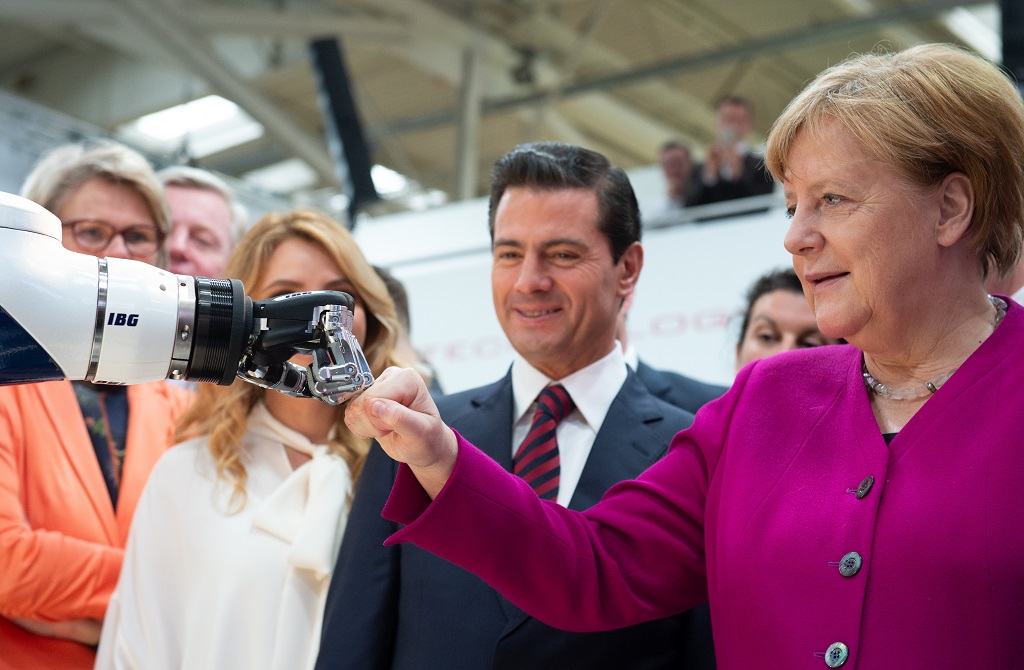 “The focus here has clearly been on the human element: We’re the ones making the decisions and setting the course. The interaction of humans with machines and IT adds up to a huge competitive gain across manufacturing, logistics and the energy industry.”

Under the motto of “Integrated Industry – Connect & Collaborate”, a total of 210,000 visitors seized the opportunity to explore the innovations on display. A total of 5 800 exhibitors were present at Hannover Messe/CeMAT.

Topics like machine learning, artificial intelligence, industrial IT platforms, the expansion of power grids for eMobility, the use of robots and autonomous systems in production and intralogistics, and the role of workers in the integrated factory were the subject of intense debate at the stands of exhibitors at the event.

As the official Partner Country, Mexico profiled itself as an innovative business partner and industrial location.

“Businesses have successfully negotiated the first steps on the path towards digitized, connected production and are now firing up for the second stage of the journey,” reported Thilo Brodtmann, executive director of the German Engineering Federation (VDMA).

“New platform-based business models, the use of digital twins and initial experiences with machine learning – all of this is set to play an increasingly important role in the mechanical engineering sector. Hannover Messe is a place where people present and discuss the shape of things to come, and we are once again highly satisfied with the outcome of the show,” he continued.

The VDMA believed that automation, software and intralogistics would continue to define the character of Hannover Messe/CeMAT, he said.

Dr Klaus Mittelbach, executive director of the German Electrical and Electronic Manufacturers’ Association (ZVEI), said: “Hannover Messe/CeMAT has once again confirmed it is the definitive home base for the global transition to Industry 4.0. Extended value creation networks, new forms of human-machine collaboration, and the increasing integration of artificial intelligence into production operations.

“These remain the key features of digitization and connectivity, and were once again first unveiled here in Hannover. All of this requires even more connectivity, which is why the German Electrical and Electronic Manufacturers’ Association (ZVEI) has been calling for an industry-capable 5G network right from the start.

“This trade show has conveyed two other key messages. First, that we can only advance down the road to technological progress and social prosperity by teaming up and working together – not by protectionism or isolation. And second, that bringing young students into direct contact with technology – as we have done at this event – is a great way to kindle their interest. And we have to do even more to attract their attention, for they represent tomorrow’s urgently needed workforce.”

Central trends highlighted at Hannover this year included the ongoing convergence between IT and mechanical engineering, industrial IT platforms and other new business models, and the imminent impact of artificial intelligence on the factory environment. The exhibitors in the automation halls profiled drive technology and fluid power as a key driver of digitized and integrated manufacturing.

Meanwhile, displays in the energy-related halls centered on energy efficiency in direct correlation with climate protection. The focus was on decentralized, smart energy systems and infrastructure solutions for the environmentally friendly mobility of the future.

Impressive innovative performance was also demonstrated by subcontractors and development partners, who revealed approaches to connecting operations with customers for seamless efficiency. Multi-material and lightweight concept design are opening the way to a complete rethinking of structural components, resulting not just in cost-cutting and greater efficiency, but also improved performance.

More than 160 Mexican businesses were at the fair to present their products and innovations. German Federal Chancellor Angela Merkel and Mexican President Enrique Peña Nieto agreed that progress and prosperity could only be achieved via open markets.

Mexico’s participation therefore fit perfectly into the context of the international free trade agreement concluded last Saturday between Mexico and the European Union, with 99 per cent of goods between both parties to be traded in future free of tariffs.

The next Hannover Messe will be staged from 1 to 5 April 2019, with Sweden as the official Partner Country. The next CeMAT will run parallel to Hannover Messe from 20 to 24 April 2020.