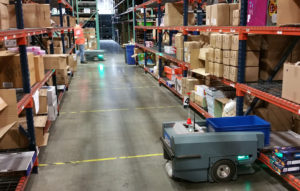 As both sectors are facing similar challenges in terms of a tightening in the labour market, the need to provide service differentiation and fight increasing operational costs, companies look toward commercial and collaborative robots to augment the efficiency of their warehouse employees.

“Chinese e-commercial fulfillment robot suppliers, such as Geek+ and Flashhold, are being deployed by major e-retailers, such as Alibaba, JD.com, and Suning.”

Albeit growing at a slower rate in 2017, Chinese e-retailers have been enjoying double-digit year-on-year growth since 2014. Alibaba has also entered into Southeast Asia markets, bringing Flashhold solutions to overseas warehouses.

At the same time, other companies have taken advantage of the advancement in machine vision and localization and navigation technologies to develop autonomous mobile robots that can share the same workplace with human workers.

Robots from Seegrid, Locus Robotics and 6 River Systems are designed to carry and shift heavy payloads within the warehouse, while robots from other suppliers, like Fetch Robotics, IAM Robotics, inVia Robotics, and Magazino, feature built-in effector and gripper systems which enable them to perform goods picking and retrieval.

ABI Research estimates that more robots will start to feature grippers in the warehouses to allow them to assist in parcel picking.

“There is no doubt about the severe limitations of these technologies. Existing gripper systems are not designed to pick objects heavier than 10 kilograms. Image recognition technology is still in the nascent state, requiring heavy investment in cloud infrastructure and software capabilities,” continued Su.

It won’t be too long before an autonomous mobile robot does more than just towing, lifting and picking objects.

“Actuator and joint systems have become more robust, and 3D camera technology is becoming more accessible thanks to the iPhone X. The maturity of deep learning hardware and algorithm-at-the-edge will soon allow robots to perform both training and inference within the warehouse environment, allowing robots receive training like a human worker.”

These findings are from ABI Research’s Commercial and Collaborative Robots for Retail E-Commerce Fulfillment report. This report is part of the company’s Robotics, Automation & Intelligent Systems research service, which includes research, data, and Executive Foresights.