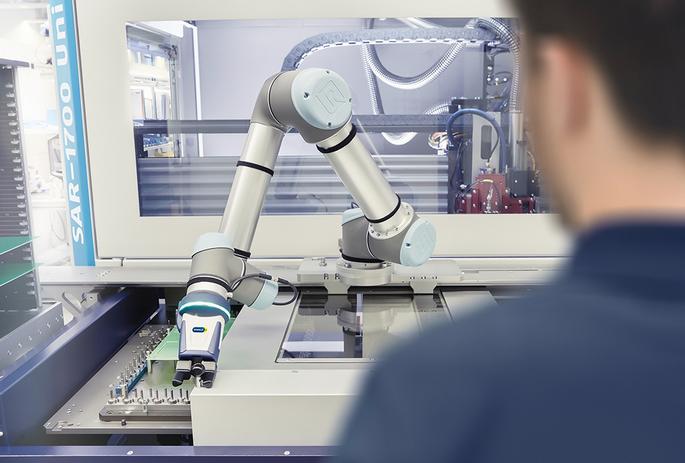 Schunk is now showcasing on a demo system to show how depanelling machines can be made collaborative for the electronics industry.

The depanelling machine, from its subsidiary Schunk Electronic Solutions, uses a robot arm for the loading and unloading processes, so that a single employee can operate up to five machines simultaneously.

The automated system consists of the SAR 1700 depanelling machine and a UR5 six-axis robot arm from Universal Robots equipped with a Schunk Co-act EGP-C gripper.

While employees used to manually load stand-alone machines such as the SAR 1700 with electrical assemblies, now they only have to manually refill the panel storage rack for the robot. The machine takes care of everything else.

The robot reaches into the storage rack, takes a panel, places it in the machine, closes the door, and presses the start button. Once the depanelling machine has cut the circuit boards, the robot arm places the parts on a conveyor belt and the process starts over again.

The storage rack can fit up to 32 panels. If necessary, the employees can take over and load the machine manually at any time.

“By applying the collaborative concept, efficiency in electronics production can be significantly increased,” explains Henrik A. Schunk.

“Instead of just one or two machines, operators can now operate up to five depanelling machines simultaneously for example. That means that the solution pays for itself within a very short period of time.”

Since the SAR 1700 is specially designed for smaller companies and represents a comparatively low investment, electronics production can be expanded gradually with additional machines. Each has the option of being equipped either manually or automatically based on individual requirements.

The Schunk EGP-C Co-act gripper is the world’s first industrial gripper which has been certified and approved by the German Social Accident Insurance (DGUV) for collaborative operations.

The Schunk EGP-C Co-act gripper used in the application is the world’s first inherently safe industrial gripper that has been certified, and approved by the German Social Accident Insurance (DGUV) for collaborative operations.

The 2-finger parallel gripper that is controlled via digital I/O, covers a wide range of applications – from small parts assembly in the electronics and consumer goods industry to assembly applications in the automotive sector. It satisfies the requirements of ISO/TS 15066 and is designed in a way that humans cannot be injured.

It includes a protective cover as well as safe current limiting. In order to make the collaboration with the operator as smooth and as intuitive as possible, the 24 V gripper is fitted with LED lighting in traffic light colours. The user can use this to signal the status for each module.

It is delivered as a completely pre-assembled unit that includes the right interface for the cobots from Kuka, Fanuc or Universal Robots. Moreover, interfaces for other robot manufacturers are available upon request.

The entire regulation and power electronics are fitted in the interior of the gripper, meaning they do not take up any space in the control cabinet. In order to further minimize commissioning efforts, Schunk is planning programming modules for all conventional cobots.