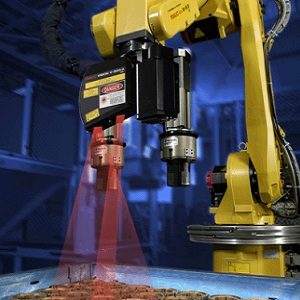 The SME market makes up the majority of manufacturing in the US.

“It’s a complex problem but one of the most important processes leading our customers into the next generation of manufacturing.

“The RVT random bin picking product is easy to use with best-in-class technology and the lowest cost in the marketplace today. What we offer is based on a 3D, depth sensing solution and is truly random.”

At its core, RBP is the process of finding and sorting individual parts in a random pile or bin.

For factories that often receive parts jumbled in a bin, picking a part out of the bin and placing it in a precise location is a necessary but very time consuming and tedious activity for workers.

The savings in time and money from robots sorting parts automatically is enormous with payback periods in months instead of years.

RVT’s new release can enable truly RBP using a single off-the-shelf camera that can understand 3D images and react in milliseconds with the highest degree of accuracy.

The addition of Random Bin Picking to cVF marks the continuation of RVT’s dedication to serving the SME market.

Now, RBP delivers a solution for the market segment’s most pressing problem. Following shortly will be the release of an entirely new Graphical User Interface for cVF that is designed to simplify the solution and guide first-time operators through the software step-by-step wizard in a technology that has typically been thought of as “experts only”.

RVT expects to begin user testing the UI redesign in early May, with an official release soon after.

“We’re opening up entirely new markets because of our price point and performance,” Weidinger said.

“Random bin picking is a great investment for our customers who want to automate the process of bin picking of parts.

“This will reduce labor costs and repetitive motion injuries as well as improve reliability and speed. We are bringing what we do for random bin picking in the industrial market and bringing it to the small and medium-size enterprises with even greater functionality to an even greater market size.

“For every manufacturer, there are potentially thousands of production lines that could benefit from truly random bin picking.”