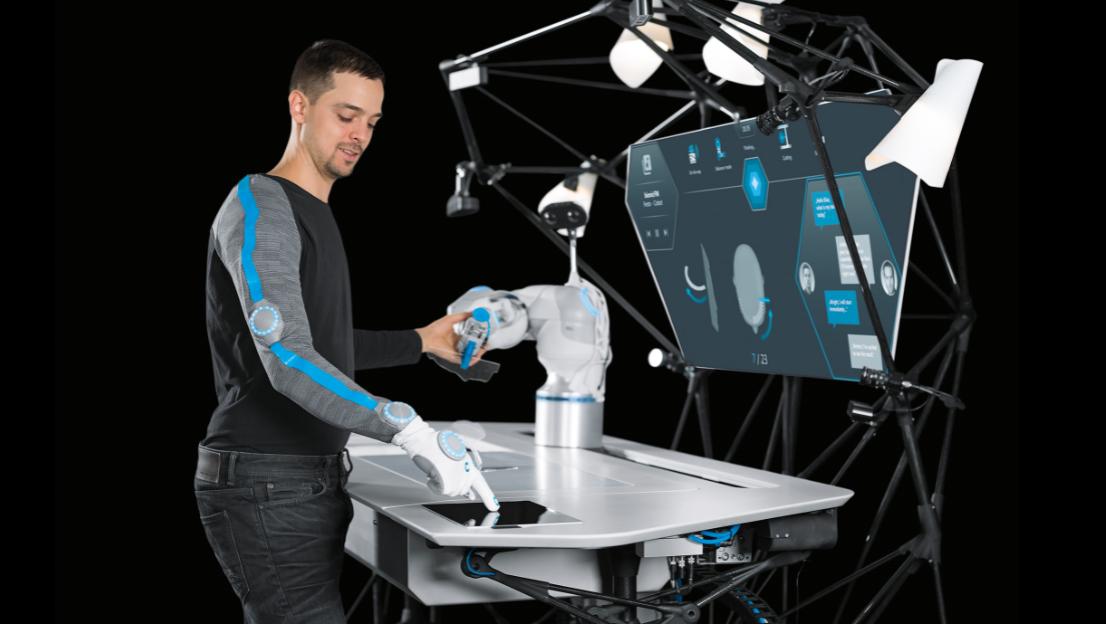 From 23rd to 27th April 2018, Festo will be exhibiting new future and bionic concepts as well as further product innovations for factory and process automation at its main booth in Hannover Messe, with the stations “Learn, Build, Operate, Inspire”.

Festo will present a self-learning workplace for human-robot collaboration, the digital customer journey from “Learn”, “Build” and “Operate” to “Inspire”, the fusion of hardware and software in the context of digitalisation and further bionic and future concepts.

The networking of humans, machinery and IT is shaping tomorrow’s production. Not only production plants are now increasingly automated: even the components themselves are becoming more intelligent and are being networked to an increasing extent.

“For us, this means focusing even more strongly on software development. We are paving the way for flexible functionalities by depicting more and more product functions in the form of software,” said Management Board member Dr Frank Melzer, head of Product and Technology Management at Festo.

A prime example of this development is the Festo Motion Terminal, in which the fusion of hardware and software has yielded the first valve to be controlled by apps. In future, components from Festo will be designed in such a way as to acquire and pre-sort data for analysis.

“With the BionicWorkplace we are showing a self-learning workplace for human-robot collaboration that combines the advantages of the BionicCobot – the lightweight pneumatic robot – with IT systems from the field of artificial intelligence,” said Dr Elias Knubben, Head of Corporate Bionic Projects.

The flexible workplace is fitted out with numerous assistance systems and peripheral devices that are networked and communicate with each other.

Along with artificial intelligence, machine learning methods make the BionicWorkplace a learning and anticipatory system that constantly optimises itself. People can directly interact with the BionicCobot and control it by means of gestures, touch or speech. Remote manipulation of the system is also possible. This efficient, safe human-robot collaboration enables the manufacture of individual products down to lot size 1.

Flight is a constantly recurring topic for the Bionic Learning Network. For many years, Festo has been working together with universities, institutes and development companies in devising research objects based on fundamental principles derived from nature. For the BionicFlyingFox, the developers have turned their attention to the fruit bat, also known as the flying fox.

With a wingspan of 2.28 metres, this ultralight flying object can turn with small radii of curvature. This is made possible by its intricate kinematics based on the scissors principle. The secondary wing is retracted during the upstroke and is unfolded again for the powerful downward stroke.

To enable the BionicFlyingFox to fly partly autonomously within a defined airspace, it communicates with a motion tracking system that constantly records its position. At the same time, the system plans the flight paths and issues the necessary control commands. Take-off and landing are carried out by the human operator.

The cyclist spider was discovered at the edge of the Sahara in 2008 by the bionics expert Prof. Ingo Rechenberg. Like other spiders, the cyclist spider can run, but it can also move forwards using a combination of somersaults and rolling along the ground.

Since its discovery, Prof. Rechenberg has been working on transferring these movement sequences to technological applications. The kinematics and the drive concept have now been developed in cooperation with the bionics team from Festo.

The BionicWheelBot rolls along the ground by forming a wheel with three legs on each side of its body. Two more legs, which are retracted during running, are then extended. When the spider is rolled up like a ball, these legs push it off the ground and propel it forwards in a continuous rolling motion.

To generate enthusiasm for technology among young people, Festo is launching a bionics kit on the market this year. It contains the construction materials required for three different bionics projects: The Bionic Elephant’s Trunk, an adaptive gripper with Fin Ray Effect®, the Bionic Fish, and the Bionic Chameleon Gripper.

The hardware is supplemented by a digital learning environment (www.bionics4education.com) with further content relating to bionics and some helpful tips for practical implementation at school or at home. This content, which is free of charge, helps pupils in constructing and programming the models, and teachers in planning their classroom lessons.