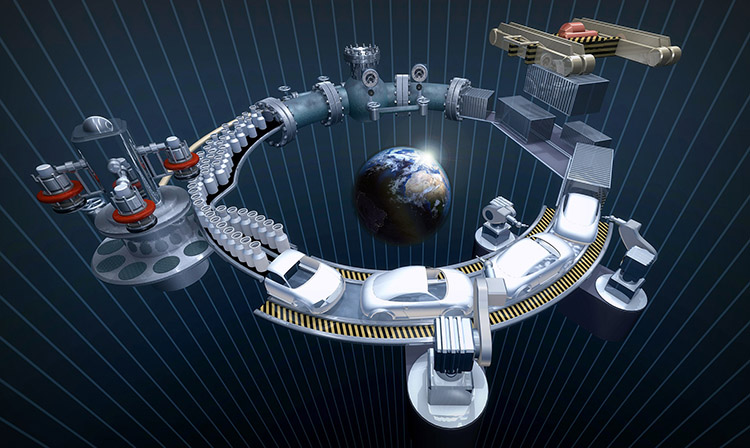 Manufacturing companies are slow to integrate digital supply chains into their networks, according to a new report by Deloitte and the Manufacturers Alliance for Productivity and Innovation.

Deloitte, one of the largest management consultancies in the world, says the lag is occurring despite the “significant advantages” digital supply networks, or DSNs, can provide.

The study, Embracing a digital future: How manufacturers can unlock the transformative benefits of digital supply networks, reveals a disconnect between executives’ opinions of their DSN efforts and actual implementation.

While the majority (51 percent) of respondents believe their DSN maturity is at least “above average” compared to competitors, only 28 percent have started implementing DSN solutions.

The findings suggest that companies are slow to adopt DSNs because they are unsure which technology will provide the most significant value or when to make a digital shift.

Some of the key findings of the Deloitte-MAPI report are:

Key Challenges: Some of the biggest barriers manufacturing companies face include overcoming resistance to change (37 percent); operating in silos/lack of integration (33 percent); finding and training talent (30 percent each); and the risk of cybersecurity issues (17 percent).

Understanding Impact: More than half (56 percent) of the executives surveyed believe DSNs can provide significant advantages, such as financial benefits. Many view the most important financial goals of a DSN as increasing sales efficiency/effectiveness (22 percent), reducing operating costs (17 percent) and improving pricing and margins (17 percent).

Speed Advantages: Respondents recognize speed advantages as a primary driver for adopting DSNs, with 52 percent citing the opportunity to dramatically reduce the time taken to make strategic decisions as a top reason for implementation.

The Path Forward: Respondents were optimistic about the future overall, and the study suggests that executives clearly recognize the benefits of implementing digital supply networks, particularly by way of increased efficiency, speed-to-market and improving top and bottom line numbers.

More than half of surveyed manufacturers expect digital supply networks will provide benefits, but only 28 percent have started implementing them, says Deloitte.

While companies are increasingly aware of the benefits of DSNs, many remain in the early phases of adoption.

Deloitte says the study also reveals “a disconnect between executives’ opinions of their DSN efforts and actual implementation”.

The survey of more than 200 manufacturing organizations found that 51 percent of respondents believe their DSN maturity is at least “above average” compared to competitors, yet only 28 percent have started implementing DSN solutions.

Further, survey results suggest that end-to-end supply chain transparency is the number-one operational goal for many manufacturers, as it represents the key to significant efficiency gains, yet only 6 percent of survey respondents are part of a manufacturing ecosystem in which every member of the ecosystem can see each other’s data.

Stephen Laaper, principal, Deloitte Consulting and co-author of the study, said: “While enthusiasm is high and manufacturers realize the benefits of Digital Supply Networks, many companies struggle to identify the right technology landscape which will provide the most value when they are approaching a digital shift.

More than half of the respondents surveyed (56 percent) said they believe a DSN will provide a significant benefit to their company.

Speed is a primary consideration among manufacturing organizations surveyed.

Most respondents (52 percent) cited the ability to dramatically reduce the time to make strategic decisions as a top reason, followed by the ability to operate more efficiently and effectively (43 percent).

When asked about the most important financial goals of a DSN, many cited increasing sales efficiency/effectiveness (22 percent), reducing operating costs (17 percent) and improving pricing and margins (17 percent).

Two of the biggest barriers associated with implementing DSNs were finding and training employees, each cited by 30 percent of respondents as a top challenge.

Additionally, organizations are potentially hesitant to change. Nearly 4 in 10 (37 percent) respondents say overcoming resistance to change is the greatest risk to the success of their DSN initiatives, following operating in silos/lack of integration (33 percent).

“There is no one way to deploy a DSN,” said John Miller, council director, MAPI.

“All companies operate differently, thus their DSN implementations carry unique challenges based on the existing infrastructure, talent base, culture and technological requirements.”

Nearly one-fifth (17 percent) of respondents say cyber risk is the main reason they are reluctant to provide production data to outside suppliers, a key component of many DSNs.

However, few have taken action to protect themselves, as just 38 percent have conducted an internal cyber risk assessment in the past year.

However, in the study, blockchain was among those drawing the least investment attention at 17 percent of respondents.

“Blockchain can increase trust and transparency among ecosystem partners while helping reduce both the cost and risk of moving information across a supply network,” continued Laaper.

“As organizations develop a greater understanding of this relatively nascent technology and the value it represents, adoption rates should increase.”

The path forward to DSNs

While there are clearly still many hurdles companies can face on their way to digital transformation, respondents were optimistic about the future overall.

To determine the best route to digital transformation, companies should consider the following questions:

“Companies that are too conservative in their approach may wait too long before finally implementing initiatives that are too large and complex,” added Miller.

“In the end, these companies risk being late to the game and implementing solutions whose value is hard to measure because of either the time it takes to show an improvement or the overall scale of the implementation.”

As an alternative, Deloitte and MAPI recommend companies adopt a “Digital Foundry” approach where ideas that have breakthrough potential in terms of business impact are generated and screened before being prototyped and piloted in a sequence of sprints.

In this way, companies can reduce the barriers to DSN implementation and effectively manage their exposure to risk by validating ideas using defined steps in a controlled environment.