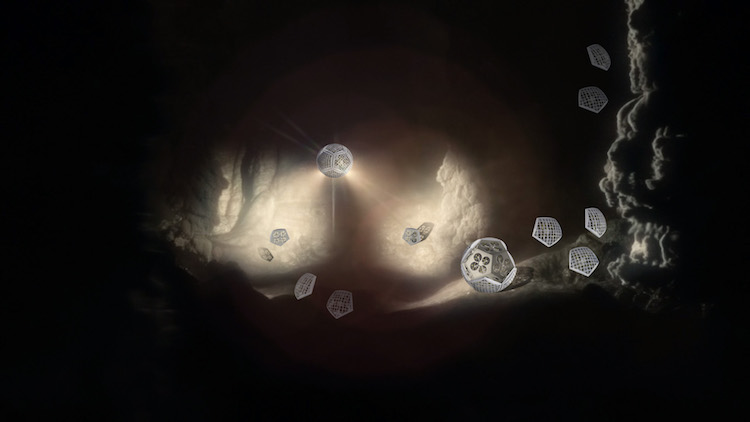 However, while it looks and behaves somewhat like Earth, Titan is believed to be full of methane and ethane, which are obviously not breathable by humans.

Which is why Nasa is drawing up plans to send shapeshifting robots to the celestial body to search for any alien life that may be able to survive in such harsh conditions.

Aliakbar Aghamohammadi, of Nasa’s Jet Propulsion Laboratory, says the shapeshifter is a “novel system concept for all-access and cross-domain mobility on bodies with atmospheres”.

The shapeshifter is a flying amphibious robot, and appears to have an initial flat shape of a pentagon, but then it can inflate into a three-dimensional shape. (Main illustration.)

Aghamohammadi says the shapeshifting robot can morph into other functional systems to carry out a diverse set of tasks, including transporting large and heavy objects, traversing long distances with minimal power consumption, creating communication networks to communicate to surface from deep hard-to-access areas.

It’s just one of 25 ideas being evaluated by Nasa for Phase I of its process to select future systems for exploring space, under a project called the Nasa Innovative Advanced Concepts.

Nasa and most others believe that robotic exploration of space is the way forward – sending humans being extremely expensive and potentially dangerous.

Winners of Phase I will receive the equivalent of $125,000 in support and resources over nine months, with a view to developing them into feasible projects that can then go through to Phase II.

“The concepts can then be evaluated for potential inclusion into our early-stage technology portfolio.”

NIAC is also considering funding the building of a swarm of robotic bees to buzz around Mars to look for aliens on the Red Planet.

The “Marsbee” (illustrated above) was developed by Chang-kwon Kang, of the University of Alabama, and swarms of them could be integrated into vehicles such as the Mars rover, which has been exploring the surface of the Red Planet since 2012.

The sensor-filled Marsbees would use the Mars rover or any similar mobile vehicle as a base station for recharging and communication.

Kang says the swarm of Marsbees can significantly enhance the Mars exploration mission with the following benefits:

The proposed Marsbee combines expertise and talent from the US and Japan in a multidisciplinary program to address fundamental aspects of flapping wing flight in Martian atmosphere.

The University of Alabama in Huntsville team will numerically model, analyze, and optimize a flapping flyer for Martian atmospheric conditions.

The Japanese team will develop and test a micro flapping robot, uniquely designed and constructed for the low-density atmosphere on Mars.

The hummingbird Micro-Air Vehicle, developed by the Japanese team, is one of only a few robotic flappers in the world that can fly on Earth.

Incidentally, robotic bees are being developed Wal-Mart for pollination work here on Earth to counter the effects of the dwindling natural bee population.

And while, as mentioned, the general view is that robotic missions are the way forward in space, one of the projects anticipates human exploration.

David Akin, of the University of Maryland, has developed what is described as a “BioBot” (illustrated above) which will replace the backpack astronauts are imagined to carry if on another planet.

Called “portable life support systems”, the backpacks can be heavy and difficult for the wearer to carry around.

The BioBot – which integrates “advanced robotic systems” – would be a wheeled device which can follow the astronaut around.

The robotic mobility base would be designed to be capable of travelling anywhere the astronaut can walk, and will also be useful as a transport for the extra-vehicular activity tools, science instrumentation, and collecting samples, and potentially carrying the astronaut on traverses as well.

Jason Derleth, NIAC program executive, says: “The 2018 Phase I competition was especially fierce, with over 230 proposals and only 25 winners.

“I can’t wait to see what the new NIAC Fellows can do for Nasa.”

Awards under Phase II of the NIAC program can be worth as much as $500,000 for two-year studies, and allow proposers to further develop Phase I concepts that successfully demonstrated initial feasibility and benefit.

“Phase II studies are given to the most successful Phase I fellows, whose ideas have the best possibility of changing the possible,” said Derleth. “Their two-year timeframe and larger budget allow them to really get going on the business of creating the future.”

Nasa selected these projects through a peer-review process that evaluated innovativeness and technical viability.

All projects are still in the early stages of development, most requiring 10 or more years of concept maturation and technology development before use on a Nasa mission.