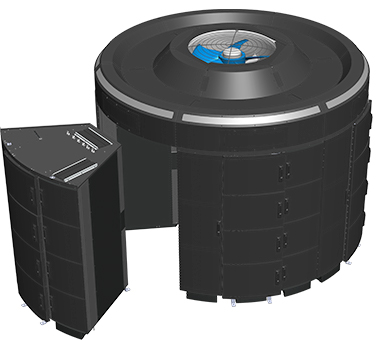 Vapor IO, which specialises in edge computing and edge data centers, and Hangar, which claims to be the world’s first Robotics-as-a-System data acquisition platform, have agreed plans for a commercial implementation of Hangar’s autonomous robotics for Industry on top of Vapor IO’s Kinetic Edge.

Jeff DeCoux, founder and CEO of Hangar, says: “The tens of thousands of autonomous robots being deployed by public and private organizations will require a national edge infrastructure.

“As these robotics go to work, they will depend on low-latency services at the edge, including precision navigation, micro-climate decision support, and high speed ingest of data to assure safe and secure deployment.

“We have been working with Vapor IO for over a year and are confident that the Kinetic Edge will meet these needs now and into the future.”

Autonomous robotics at the Kinetic Edge

Vapor IO’s Kinetic Edge deconstructs the traditional “large building” data center into a cluster of tightly-integrated hyper-local micro data centers connected by high-speed fiber and embedded in the urban fabrics, such as at the base of cell towers.

The distributed nature of the Kinetic Edge makes it possible to span an entire city, provide low-latency hyperscale compute at the edge of the wireless and wireline networks.

In essence, the Kinetic Edge presents a city-sized, software-controlled virtual data center that, while comprised of IT equipment spread across hundreds of square miles, behaves as if located in the same building. The first Kinetic Edge deployment is under way in Chicago.

Hangar’s Robotics-as-a-System will use the Kinetic Edge to plan and execute autonomous missions that produce 4D Visual Insights for Enterprises in many industries.

Hangar’s real-time system includes data sources that are required for autonomous robotics, but is also capable of delivering on the requirements for autonomous cars, including precision navigation, microlocation, microclimate and universal traffic assistance.

Cole Crawford, founder and CEO of Vapor IO, says: “Hangar has run hundreds of thousands of drone missions, capturing imagery for millions of objects. They are the de facto standard for autonomous drone deployments.

By partnering to deliver Robotics-as-a-System capabilities at the Kinetic Edge, the companies aim to deliver a number of benefits, as detailed below.

Enormous economic value: Autonomous robots will let municipalities and commercial businesses perform highly-specialized tasks, such as building or infrastructure inspections, at much lower costs and achieve much better outcomes.

Gartner estimates that $3.7 Billion was generated from approximately 175k commercial drones in 2017.

A recent study by Association for Unmanned Vehicle Systems International estimates that In the US alone, drones have the potential to create $82 billion in positive economic impacts and generate more than 100,000 jobs by 2025.

A nationwide and open platform for real-time Vehicle-to-Everything (V2X): By encouraging diverse ecosystem players to leverage the Kinetic Edge as a general-purpose, shareable platform, Vapor IO seeks to enable services for autonomous vehicles that will include precision navigation, microlocation, microclimate awareness and universal traffic assistance.

Rich autonomous ecosystem: By offering a single, shared and open infrastructure to support any number of autonomous devices – not just drones, but also cars, trucks – the Kinetic Edge will attract a diverse ecosystem of suppliers and consumers of shared autonomous services.

The Kinetic Edge and Project Volutus

The Kinetic Edge will be rolled out in the US via Project Volutus, a partnership that was announced in June of last year.

Project Volutus seeks to deploy a nationwide network of Kinetic Edge micro data centers in key metropolitan cities and the partners are now deploying to the first cities, including Chicago as the first Kinetic Edge city.

By building Hangar’s Robotics-as-a-System on top of Vapor IO’s Kinetic Edge, the companies plan to leverage infrastructure for autonomous robotics across the entire network of Project Volutus cities as they come online.