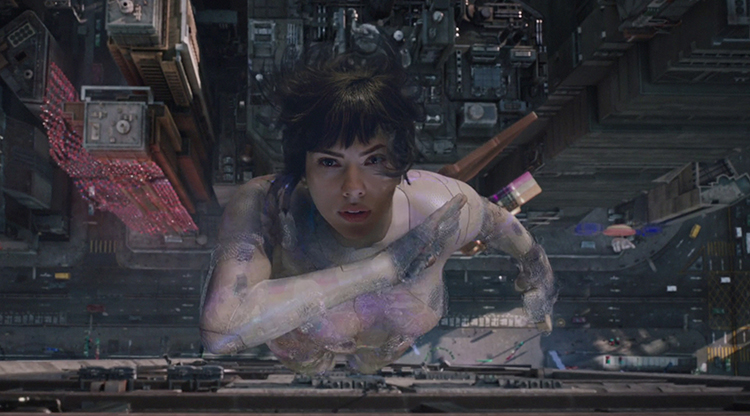 Even though I’m not all that familiar with “manga” comic culture, I’ve seen some manga movies and have heard of Ghost in the Shell.

Manga originated in Japan as far back as the late-19th century, but with their arrival on television, truly awesome animated cartoons have captivated new generations of fans from around the 1980s onwards.

Ghost in the Shell was originally known as Mobile Armored Riot Police and was a TV series in the very early 1990s. It became a worldwide media franchise, and now, we have this film starring Scarlett Johansson.

One of the top-grossing science-fiction films of 2017, Ghost in the Shell also stars Japanese movie legend “Beat” Takeshi Kitano.

But being a film aimed at Western audiences, many of the leading actors are European – Juliette Binoche being the most notable among them.

The opening of the film is just about as spectacular and impressive as movies can get – amazing. The opening 10 minutes alone are probably worth the price of admission to the theatre or wherever people go these days to watch films.

It’s probably online at Netflix or Amazon or somewhere. However you get hold of it, Ghost in the Shell is certainly worth spending a few hours with.

It starts with an explanation of a future world where humans augment their physical capabilities with robotic components – improve their vision or hearing or whatever.

In the case of Johansson’s character, the augmentation is somewhat more extensive than that, but we don’t want to give away too many details.

What we can say is that the sequences showing the augmentation operations inside the labs and then the world outside is probably worthy of the best manga cartoons and films.

There has been at least one other film version of Ghost in the Shell and I may get round to seeing that, but generally, I tend to prefer the version I’ve seen first, which may mean that this film has influenced my perspective on the whole manga culture, if I get round to sampling more of it.

But if the rest of manga is only half as good as this, I’m sure it’s worth delving into.

Although there are many fantastic action scenes, the storyline has great strength and depth – and has more twists than I expected.

There are some profound ideas expressed by the characters and some large themes about humanity’s future explored in the film – these are elements which I admit I am particularly interested in.

I didn’t expect a manga cartoon story to be so sophisticated, but then, as I say, I didn’t know much about the tradition.

It’s difficult to believe Ghost in the Shell received moderate to good reviews when it was released, some were actually negative.

I’m not sure why that would be, except maybe this film has Hollywood rather than Japanese sensibilities, and some may think that it lacks authenticity.

But manga is a globally well-known and utilised style now, and it’s inevitable it will adapt itself to local cultural characteristics.

Perhaps the most “universal” themes in the film include the observation that governments and large corporations are engaging in secret activities which are diabolical in nature – if true.

It’s a sci-fi fantasy film, so maybe you shouldn’t extrapolate or correlate anything in it to what’s happening in reality.

But it’s a well-known fact that powerful nations and companies are working on creating what have been called “super-soldiers”, whose natural human abilities are being augmented with technology which is surgically integrated into their bodies.

And “mind-comms” as it is called in the film is something that perhaps ought to be brought out into the open civilian domain more because keeping that secret is probably the reason why so many criminals and terrorists are getting away with all manner of attacks on unsuspecting members of the public who seem to have no choice but to go along with whatever their governments and legislators decide for the sake of alleged “national security”.

It might be one of the oldest tricks in the book, but there doesn’t seem to be any sign that its rumbling will result in greater accountability of peddlers of lies about security motivations any time soon.

But while we wait for that distant day when there are systems in place that prevent abuse of advanced technologies as shown in Ghost in the Shell, we do get to watch some pretty amazing movies.

There are many highlights I could pick out from this film, including the geisha robot which has a surprising and unsettling way of moving – some film fans may know about a scene from the 1972 film The Exorcist which didn’t make the final cut because it was deemed too frightening.

One of the other things I liked about Ghost in the Shell is the street scenes. I suppose they were like Bladerunner in many ways, with giant augmented reality billboards and seedy low-life characters everywhere, but whereas the Bladerunner world seemed slightly intimidating to me, making me not want to be there, the Ghost in the Shell world is one I’d like to visit for a while – seems less threatening.

Having said that, the prospect of living under a government which kidnaps people and turns them into cyborgs or androids – or part-robot at least – is not one I would welcome, surprise surprise, although it’s difficult to tell the difference between fiction and fact when I think of the things that are going in our real world today.

In our real world today, we already have many people whose bodies have been enhanced with technology – hip replacements, organ transplants, and hearing aids being some examples. But not all of these things are done against the will of the individuals who have been “augmented”.

One technology perhaps a lot of people would be interested in augmenting their lives with is an invisibility cloak – Johansson wears one in the film, making her look very similar to how Taylor Swift looked in her Ready For It…? music video.

Trying to answer the question about whether this is an allusion to the “emperor’s new clothes” story would probably make this article too long and too difficult to write, and I’ve got to save time to find myself and get a life. Interesting idea though.

Ghost in the Shell is the third time in recent weeks I have seen robotic 3D-printing of bodily tissue on screen – the procedure was also shown in Westworld and Bladerunner.

Maybe it’s been done in real life. Certainly, scientists have grown muscle tissue and human organs inside labs, but whether they have used robots to build a human using flesh and blood – synthetic or natural – I don’t know.

But if it is happening, I think we should be told. Otherwise, how do we know that the people committing crimes everywhere and getting away with it by claiming some sort of crappy national security excuse are human or lab-made robots who have limited or no free will of their own?

This annoying thing called “free will” is a central issue in Ghost in the Shell. If you’ve spent billions building an android that looks and acts human enough to infiltrate any human environment anywhere and do exactly what you want it to, the last thing you want to have to deal with is that android developing a mind of its own and exploring what it considers to be its own free will and individuality.

In the film, humans are accepted as having free will and individuality, although neither are really respected. Robots do not seem to be thought of as having any of the qualities which we think of as human.

“When we see our uniqueness as a virtue,” says the Takeshi character, “only then do we find peace.”

The irony is that he was speaking after one of his charges used their free will in making a decision he did not approve of.

But there are other characters who have much less time for chit-chat about philosophy – essentially, they just want everyone to be turned into robots and want to have total control over everything.

“You are reducing a complex human to a machine,” complains the Binoche character at one stage.

To which the reply from one of the main baddies – played by Peter Ferdinando – is, “I don’t think of her as a machine – she’s a weapon and the future of my company.”

Perhaps the hope lies in the fact that at least he didn’t say, “I don’t think of her as human.”

I suppose we have to take whatever we can get in terms of respect these days.

Ghost in the Shell does have some interesting unstated observations of moral ambiguities like that. The choice never seems to be between good and bad, only bad, worse and worst.