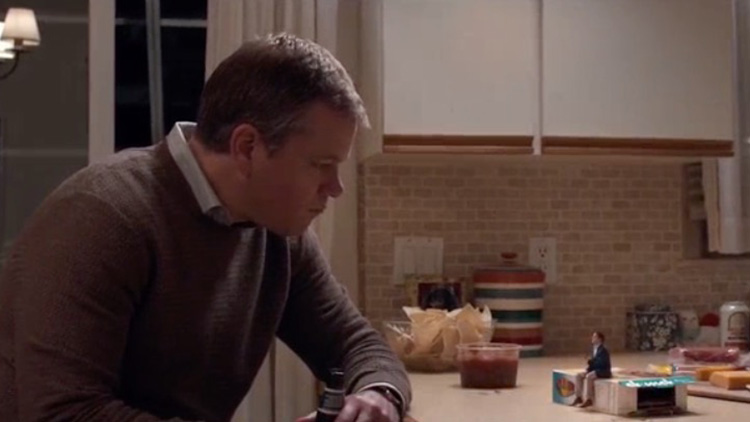 Downsizing starts with a scientific discovery that enables the miniaturisation of normal-sized human beings to a fraction of their original size – to about 5 inches tall.

Why would anyone want to downsize in this way? Well, downsizing in the real world usually means moving to a smaller place to live and reducing your costs.

And this is what Downsizing is about, except it includes downsizing of the physical human form, which saves even more money because you could then live in a toy house and pay a tiny fraction of the costs of living as “big people”.

“Small people” also produce less waste, and, therefore, are more environmentally friendly, which is another reason for the practice of downsizing to catch on and for more people deciding to go down in size.

Matt Damon plays a character who is one of those who decides to downsize, but things don’t go as smoothly as he had hoped, mainly for a reason that it would probably be best to leave out of this review because it might spoil it for some.

As we keep telling you, it’s best if you see these movies first before reading these reviews because we’d quite like to talk about why Damon’s character feels out of place in the small world as soon as he arrives, even though he started out being so enthusiastic about downsizing.

But what we can say is that, while the film starts out with an interesting scientific premise, it’s actually more about love, betrayal and human relationships.

Damon’s versatility as an actor is probably underrated. It’s difficult to accept anyone else playing the lead character in Jason Bourne – a role he defined and made his own. He did a good job with Tha Martian, too. And yet, his role in Downsizing is completely different from either one of those characters.

Damon plays an average guy who likes a beer, has what seems like a happy marriage, and who happens to be an occupational therapist, something which eventually enables him to find some meaning in the small world. His friendship with a charity worker, played by Hong Chau, within the small world seems unlikely, but is believable and engaging nonetheless.

Supported by the ever-unpredictable Christopher Waltz, who plays his hedonistic party-loving rich neighbour, Damon is able to make something of this film even though it doesn’t revisit what I thought would have been a more interesting subject to explore – the consequences of physically miniaturising humans.

Throughout the film, the downsides of downsizing are referred to – the worry about bacteria and viruses becoming far more dangerous if you are much smaller, and even the slightest change in temperature having a far more magnified effect on a smaller cell structure.

But obviously the producers didn’t feel the need to science the shit out of this one.

More than anything, the film was about excess – too much waste, not enough environmental awareness, and poor distribution of resources, so that even in the idealistic small world, there is poverty and people who do not have enough to eat.

It probably made more commercial and political sense to take the film in that direction, using Damon’s popularity as a platform, and it was engaging and enjoyable to watch as a movie.

But there just wasn’t enough made of the scientific aspect of the story to make it anything more than a heart-warming tale about a man who is betrayed and feels he’s made a bad decision finding enough meaning in his downsized life to find some contentment.