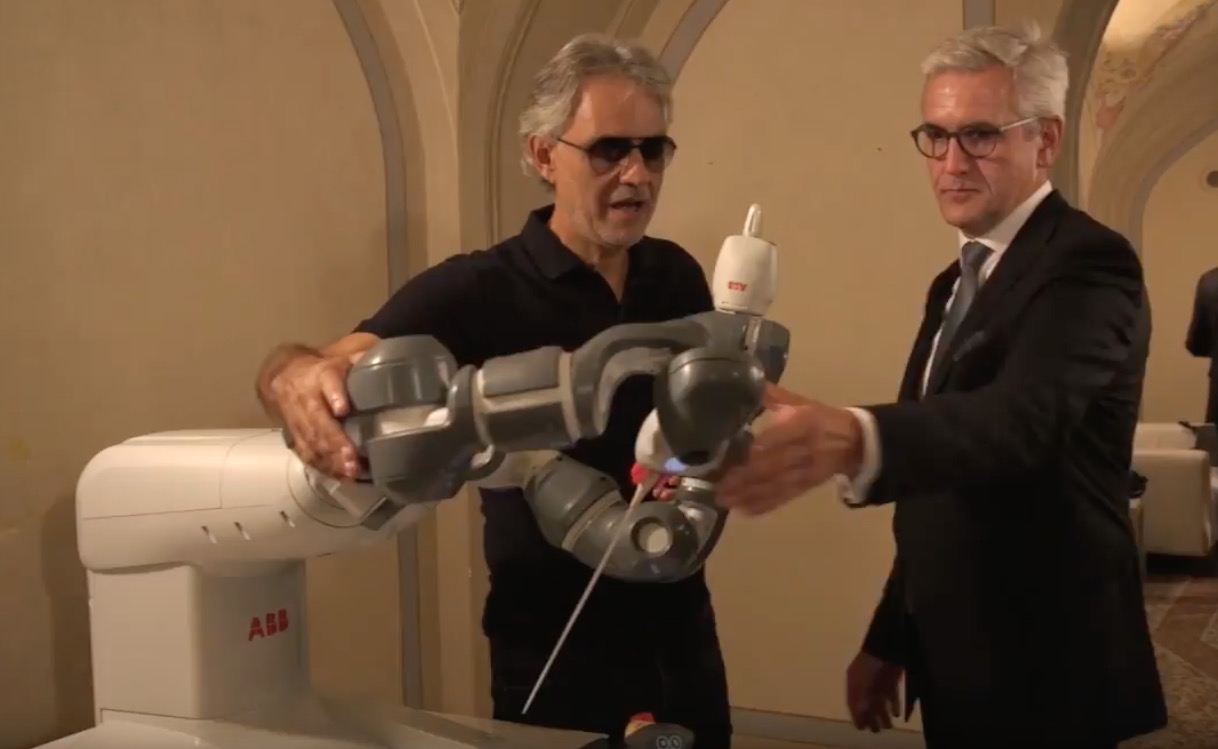 Robotics and Automation News has been trying to get an interview with Spiesshofer but he gave an exclusive interview to Forbes instead.

In the interview, Spiesshofer tells Forbes: “Quite recently, our YuMi robot – that we have been showcasing since 2017 – demonstrated what artificial intelligence and robotics can do by conducting an orchestra with Andrea Bocelli singing in Pisa, Italy – a clear demonstration of where we are going in the world.”

Robotics and Automation News published an article about YuMi conducting the classical orchestra in Italy at the time.

Forbes reports that Spiesshofer considers YuMi to be a symbol of ABB’s transition from a “robot-based” business model to a “robotics-based one that’s solution- and functionality-driven”.

Meaning, probably, that ABB is not entirely about selling robots but about solutions which include robotics and automation.

One example of this might be a new painting industrial robot, which fully integrated with ABB Ability, the company’s industrial internet of things platform.

Ability enables operators to monitor and control the painting robot to a very high level, which would allow them to discover efficiencies and quality improvements.

Painting, though it sounds simple, is said to be one of the more complex, time-consuming and expensive parts of the automaking process.

Until relatively recently, a lot of painting was still done by human workers, but robots have been taking over in the past decade or so, and have become highly sophisticated of late. (Read our great feature on robotic painting systems.)

The automotive sector is still the largest buyer of industrial robots, accounting for half of all sales in the North America region, for example, according to the International Federation of Robotics.

But Spiesshofer observes that the robotics market is broadening to include new industry segments.

“In 2009-10, the majority of our activity was in automotive,” Spiesshofer tells Forbes. “When the world talks about industrial robots, they talk about it in the context of automotive.

“But for me robots are ubiquitous, and we have played a major role in bringing robotic solutions into new industry segments from food and beverage to combating climate change challenges.”

Forbes notes that, before Spiesshofer took the helm at ABB, the company’s robotics unit was running at a loss of $300 million a year around 2009-10.

Now, ABB Robotics “contributes 6 per cent to the company’s corporate headline growth”, in the words of Forbes.

But Spiesshofer is reluctant to take the credit, apparently. “Our team achieved the turnaround in focus and reshaping of the robotics unit,” he tells Forbes. “I am proud of the momentum we have built, but it’s not about me.”

Spiesshofer is clearly looking to capitalise on industrial companies’ growing interest in IIoT platforms like Ability, which can use AI – perhaps in conjunction with robotics – to find efficiencies all across an operation.

And he sees “only one competitor” who has a similar level and scale of service in terms of intelligent control systems for industrial operations, and that company is Siemens, which has an IIoT platform called MindSphere.

There are other companies which have IIoT platforms, of course, but clearly Spiesshofer considers Siemens the closest competitor to ABB, especially when it comes to providing IIoT platforms for the oil and gas industry.

“We are taking the oil and gas industry from an automated into an autonomous operations sphere,” says Spiesshofer.

The oil and gas industry is an ideal market for IIoT platforms because they often have vast facilities with relatively few human operators or workers at them.

They tend to install massive sensor arrays and monitor everything automatically rather than manually.

And ABB is obviously well aware of this since it supplies a lot of power-generation equipment to companies in the sector, albeit downstream, as in further along the continuous manufacturing chain.