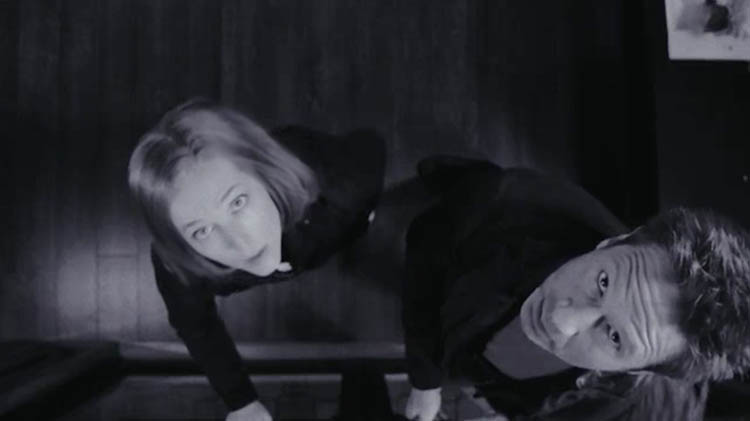 The fundamental basis of the show – the investigation of paranormal phenomena, aliens, and the conspiracies connected to them, as well as the typical gruesome crimes the FBI must deal with – was expertly blended by its makers, and the acting and style of the show have always been engaging.

Such is its enduring popularity that it could still go on for many more seasons, with future episodes featuring Mulder and Scully doing nothing more than sitting on their comfy chairs and occasionally getting up to eat or drink or put another log on the fire – all of which may be exciting enough when they’re in retirement.

Neither actor probably wants that, but it might just work, especially after this episode.

In this particular edition, David Duchovny, who plays Agent Mulder, and Gillian Anderson, who plays Agent Scully, once again show the acting skills and the on-screen chemistry which made everything else in the show work so well.

Which may have been the reason why every bit of technology in this particular installment fails to work properly and stresses out the two intrepid agents no end.

Starting at the totally automated sushi restaurant, where the food is prepared by Kawasaki robots and delivered via conveyor, through the nightmare journeys in driverless cars, to the smart homes which are way too smart for the good of humanity, everything that can fail and cause trouble for the agents does exactly that.

It was an unusual episode in many ways – very little dialogue, no human baddie in sight, no case to investigate, and no other characters – just Mulder and Scully.

And it could be said to have been one of the most contemporary and topical in the sense that the level of interest and awareness in today’s society about robotics and automation technology has probably never been higher, and they have never been as much discussed in the media and in political circles.

The episode also touches on the subject of privacy and how gadgets like smartphones seem to know what you’re thinking and feeling and use them to market products and services to you instantly.

All of these things – not to mention the life-threatening situations the agents find themselves in – make them eventually eschew technology in favour of human contact.

It was a basic message, but probably important for a platform like The X-Files to make. Whereas its previous perspectives on aliens and government conspiracies may have been difficult for the average person to see let alone prove and, therefore, do anything about other than enjoy the show, technology – pervasive, intrusive, automated, unfeeling, unthinking and intensely annoying – is everywhere for all to see.

Maybe it doesn’t always go as nightmarishly and comically wrong as it does in the show, but if you’re one of those people who avoid automated grocery shopping tills at all cost, preferring to go to the aisle where a human can operate a cash till and charge you for your shopping, you will understand.

Yes, I am one of those people who prefers human-operated cash tills over automated ones. I think I might even prefer to pay more to shop that way than be stuck not knowing what to do when faced an automated machine I don’t understand.

They always seem to go wrong, although they probably actually don’t – it’s likely more because I don’t know how to use them properly. Either way, I really don’t care to know the answer – I just want it to work. And because it didn’t work the first few times I used them, I just don’t want to know any more.

I’ve had better luck with automated phone calls, where you hear a recorded or computer voice. I seem to manage to navigate those quite well, although it’s not flawless.

It does have hilarious moments like that, with Duchovny perfectly capturing the character’s confusion and frustration in comic style so effortless that you wonder why he doesn’t do stand-up comedy as well as music concerts, which is what he does when he’s not filming X-Files episodes.

One sequence that film fans would recognise shows a whole load of tiny drones gathering at Mulder’s house, and he has to make a run for it and escape in his car, like the characters in the Alfred Hitchcock film, The Birds.

Scully, meanwhile, is given momentary respite from the technology chaos when she watches the robotic vacuum cleaner she receives as a gift through the post – by drone, of course – and seems impressed by its cleaning skills.

But that too develops a mind of its own and she is unable to control it even after putting it back in its box.

At some point, inevitably, all of the technology in the show – drones, smart homes, driverless cars, humanoid robots, and even Boston Robotics-style canine robots – hunt down the by-now desperate duo, chasing them through the streets and the woods into a dark, dingy industrial facility.

You may be wondering why the robots do this, and although we have a couple of ideas, we’ve probably spoiled it enough for you already.

Some people might say this episode of X-Files perpetuates the typical technophobic, anti-robotics and automation view which is not helpful to the industry as a whole.

This may be true, but if technology is automated to the point where it not only takes away our own autonomy and privacy, which is bad enough, but also uses it against us, it seems right and necessary to say something about it.