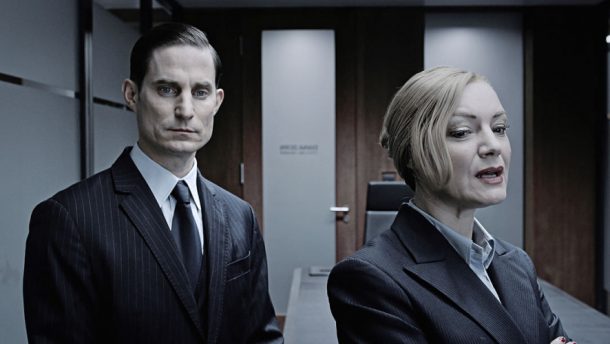 Strictly speaking, Hidden Reserves is probably not an appropriate film to write about for us because it doesn’t include robots, but it’s such a good science-fiction film.

The central theme of the story is highly original, and we don’t want to give it away if you haven’t seen it, though that makes it very difficult to write about.

We suggest you watch it first before reading this, although we will minimise any spoilers.

It’s a German-language film, so you’ll need to read subtitles unless you speak German. It contains some Russian, too, apparently, but we didn’t notice because we only speak English around here.

Financed by backers in Austria, Germany and Switzerland, Hidden Reserves – or Stille Reserven in its original form – is one of the best examples of modern European cinema that you’re likely to find.

It stars actors who were previously unknown to us here at Robotics and Automation News global headquarters, which is another bonus.

Personally, I like many of the actors who have become big stars over the decades. But I also like the feeling of discovering new stories and new characters, which are experiences Hidden Reserve offers.

It’s definitely weird, though – both in terms of characters and storyline.

Filmed in Vienna, Austria, Hidden Reserves is set in an imaginary future when human beings are not allowed to die in peace – or die at all actually – unless they can afford to do so.

Yes, that’s right. The right to die has been abolished. And no, we’re not talking about the euthanasia debate, which often occurs in today’s society, where some people say an elderly or terminally ill person, or someone whose affliction makes the quality of their life so painful that they want to die and ask someone to assist in their suicide.

No. Hidden Reserves shows a world where people who are close to death, and look very likely to pass away, according to various remotely operated health monitoring technologies, are vacuum-packed within minutes and kept in cold storage in suspended animation and not allowed to die for… well, for a very long time… could be years, decades or even centuries.

They are kept cryogenically cooled, but alive, as though on a life-support machine.

There. We’ve given away the main theme. But then, that’s probably as much as you can find out through the posters and trailers for the film.

It’s quite an interesting concept and, in the film, gives rise to a rebellion or insurrection in society, where activists try and stop the authorities from swooping on people’s homes and taking people away when they are about to draw their last breath.

That last breath belongs to the government and its cronies and is going to have to wait to be exhaled.

It’s difficult to imagine the euthanasia campaigners of today – most of whom appear to be well-meaning elderly people who want to ease or end the suffering of people whose lives have reached that stage – becoming as militant as that.

It sounds crazy but the film does a good job of showing how not-crazy the idea might be given certain prevailing societal practices.

I mean, what kind of sick mind wants to literally kidnap people and keep them in suspended animation forever?

What the authorities do with these people held in suspended animation is another question, and I’d like that to have been explored some more.

They certainly monitor their vitals and mental processes.

But the main thing is that the company at the centre of the story, and our main protagonist, played by Clemens Schick, sells death insurance.

One rich old man who can afford the right to die eloquently tells Schick’s insurance salesman, who is trying to persuade him to sign up to a suspended animation-avoidance package, that it’s nothing more than torture.

And the film seems to come down on his side, although I’m not entirely sure about that. The cantankerous old codger did look a bit like the famous political satirist whose name I seem to have forgotten now, along with the entire internet it seems.

But the fantastic imagery of the film, the ultra-high-spec offices of the life-prolonging company, the pristine condition of every colour-balanced pixel on the screen, would suggest that the filmmaker is more than a little fascinated by the possibility of such an eventuality – where we are all subject to being held in a giant refrigerator and artificially kept alive for whatever purpose the government and companies on its approved list have in mind.

In the film Minority Report, a small number of humans held in suspended animation were referred to as “pre-cogs”, meaning they have pre-cognition capabilities – they can predict events before they happen.

It’s all gone way too far this prediction business. Now, if an unscrupulous pre-cog plays mind games by imagining all sorts of things happening that they themselves know is never going to happen, Tom Cruise is going to go around harassing the hell out of all and sundry for absolutely no good reason.

While some people might welcome being harassed by a movie star, the real criminals and culprits could be getting away with all sorts while Tom Cruise is checking to see whether you’re picking your nose or not.

And all because some lying, criminal pre-cog is having fun playing a game while floating in a giant jacuzzi or whatever these people do.

Of course, some aspects of the film were predictable, but if the film had been any more original, or any darker, it probably would have had too much effect, too much power. It might have given people genuine, natural nightmares.

What is it about people’s minds these powerful companies want to monitor and learn? Perhaps they want to develop systems that would enable them to make people forget some things and remember others.

I still can’t remember the name of that journalist, or polemicist, or columnist, or whatever he was. Very famous. Now, he can’t even make the list of top 100 famous journalists.

I’m not saying I was a big fan of his or that my not being able to remember is anything more than forgetfulness on my part.

But imagine a world where people’s minds, their brains, are directly programmed, and that programming is reinforced through the media, which is mostly the internet these days.

Not only that, imagine centuries of being held in suspended animation, with some awareness – no matter how limited or weak – of your existence and what is happening to you. And then imagine an automated system which basically experiments with your mind the whole time you’re in this twilight world between being asleep and being awake, of being alive and being dead.

It’s a word that that journalist might have used. Whatever his name was.

Update: Gore Vidal. That was his name.