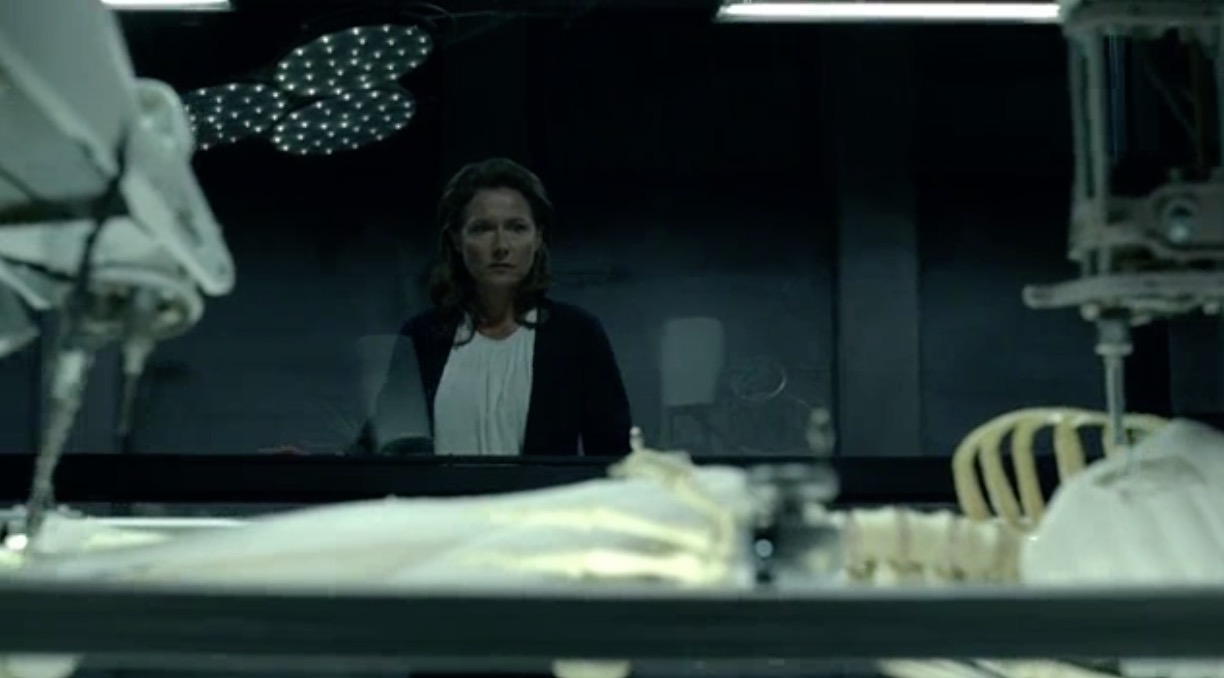 In preparation, we thought we’d dust off the box set of the first series and watch all 10 episodes in one go so we can tell you something about it.

It’s difficult to know where to start because it’s such an epic show, with an obviously massive budget, legendary film stars and big sky pictures reminiscent of traditional western films of old.

But manufactured glimpses of John Wayne country notwithstanding, Westworld is far more gritty, gory, disturbing and, to be honest, dazzling in scope, script and star power than anything The Duke was ever in, although he did carry many classics such as The Searchers and True Grit, which still have the capacity to unsettle audiences and disturb their minds.

Hopkins and Harris dominate the screen whenever they appear, delivering their lines with all the bitter cynicism and cold contempt one can expect from grizzled old screen veterans.

But the character played by Wright probably encapsulates the essential ambiguity which seems to be one of the main messages of the story – the personification of the idea that we have all gone from some semblance of security, certainty and security in our lives to total emotional chaos, and are none the wiser for it.

Many people say that we, human beings, are living in a simulated universe. While most people probably don’t subscribe to this interesting concept, some say that our world is controlled and micro-managed to within an inch of its life – and that final inch is very much under threat.

When we started this art and culture column, we knew it would be difficult to talk about television shows, films and books without spoiling something for someone. We’ll try our best not to, but we suggest people watch what we write about before actually reading.

That way, it will feel like more of a discussion rather than a preview or review, and there’s no chance of us spoiling it for you.

But Westworld is complex and rich enough that if we give away some storylines and themes, it will hardly be any the poorer for it.

For those who have not seen the first series, we recommend Westworld as one of the best television series ever. It is well worth binge-watching several times over.

While Westworld does deal with themes and storylines that are “archetypal” or that you may have seen some version of before, it does so in a thoroughly contemporary way and with the aplomb that the subject matter deserves.

And although it is based on the 1973 film of the same name, its look and feel seem to borrow more stylistic elements from Deadwood than anything else.

The feeling of tension, creepiness, shock and psychological horror the original Westworld film – written by horror meister Michael Crichton – engendered in audiences in the 1970s is probably not achievable in this day and age when most people have already seen hundreds if not thousands of robots in films and TV shows by now.

Also, audiences these days are difficult if not impossible to shock.

What the producers seem to have decided to go with is graphic violence. So you get a lot of blood and guts and some sexual violence.

Like I said, it’s a nasty piece of work.

It is in that sense – of casual, gory violence – that it’s quite like Deadwood, but Westworld has the added dimension that only science fiction can offer.

So not only do you get dialogue about virtual-existential crises and time-dilation traumas, you also get copious amounts of hi-tech imagery – the inside of glass-walled labs, robotic 3D printing of bodily tissue, super-sophisticated tablet devices and so on.

Much of the hi-tech operations are obviously behind the scenes, only accessed by those who program and fix the robots in readiness for the next round of damage caused to them by paying guests who visit Westworld.

Guests who enter the Westworld theme park are allowed to kill the robots at will and do other unspeakable things to them all in the name of “finding themselves”, or finding meaning in their lives, or some crap like that.

This pursuit of self-discovery always seems to involve violence, which is understandable, given what we all know about human nature.

That’s not to say, however, that the violence completely eclipses the psychological elements of the story. There are enough twists and turns in the story to bend your mind to a new reality, if only for a little while.

It’s fortunate for filmmakers and audiences that human beings have long been utterly preoccupied with questions about consciousness, and the meaning and purpose of our lives, because addressing these questions in a stylish and ambitious way are what makes for great fiction, great science fiction in particular – even if no one has any real answers.

But in reality, it’s not Westworld the TV show or the evil characters played by big-name movie stars or anything contained within the production that is the most nasty thing. The nastiest thing is the feeling that this is the reality of our world, out here, IRL; elite groups of rich and powerful people playing games with the lives of those less capable – or completely incapable – of defending themselves.

These symbolic and metaphorical aspects of Westworld, however, cannot adequately be discussed because, like the robots in the show, we don’t have enough awareness of what’s going on in the kernel of society as we know it.

Like the character played by Wright, we don’t know what to think or do, and our options are limited by design, through programming. And every time we think we’ve found a way through the maze, someone blocks our path.

And it’s probably no accident that Wright always seems to play characters that are difficult to warm to – or dislike particularly – because of their overly officious, technocratic nature yet sort of reliable matter-of-factness.

Like the Harris character says, there are no accidents in Westworld.