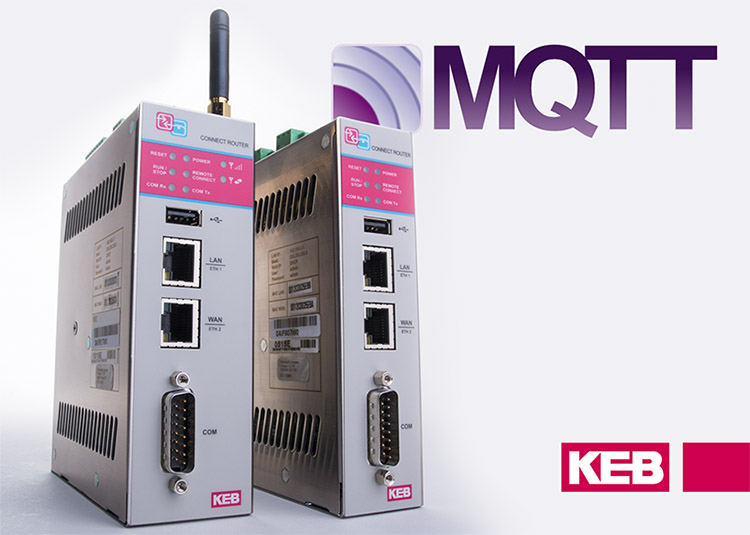 KEB’s VPN Router has previously been used to provide secure remote access with data logging capabilities. Now, the Router can also be used as an IIoT gateway.

MQTT is a pub/sub messaging protocol that works on top of the TCP/IP protocol.

It can guarantee the delivery of a message and possibly resend the message in high latency networks.

The protocol is meant to be used in situations where a small code footprint is required and the network capabilities are limited – like in small devices or automation systems with widely distributed components.

The simplicity of the protocol’s operation is one if its greatest assets.

Turnover of personnel is a reality in most industries, as are tight deadlines, scope creep, and constantly changing technology.

By using MQTT in an application a developer is choosing a protocol that will be simple to install and maintain, and easy for new personnel to learn.

As CPUs get smaller and faster, the lightweight properties of MQTT become a greater advantage.

With limited overhead and minimized data packets, the CPU’s resources can be used on other functions rather than devoting it to communication.

Another benefit is the availability of cloud-based platforms developers can use to build out their MQTT applications.

Logged data can be easily pushed to services such as Amazon’s AWS or Microsoft Azure with the MQTT protocol.

From there, machine builders and systems integrators can perform analytics, create dashboards, and measure critical KPIs.

Security is an important consideration for IoT devices in an industrial setting.

The C6 Router can use TLS, SSL, authentication, and authorization security features when communicating with the broker.