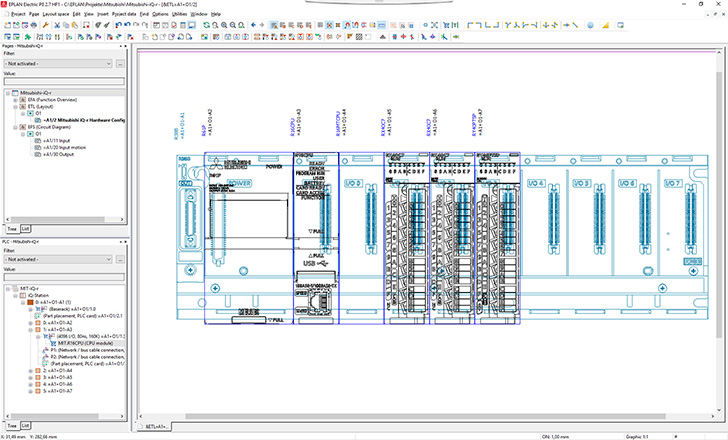 The integration is made possible by industry association AutomationML, according to the companies.

Data such as symbolic addresses, for instance, can now be exchanged bidirectionally with the current software suite.

The companies claim the results in Eplan Electric P8 are “impressive”, and include valid schematics, including bus wiring for components of a programmable logic controller – a type of industrial computer – amongst themselves, and “top quality” hardware configurations.

With the new integration between Eplan Electric P8 and Melsoft iQ Works, solutions provider Eplan and Mitsubishi Electric claim they have taken this a step further.

AutomationML forms the integration’s foundation, which paves the way towards Industry 4.0 with its neutrality and openness for data exchange.

The dataset created in Eplan forms the basis for PLC hardware (rack) assembly and software programming.

What’s special, claim the companies, is that the data are transmitted along the whole product development process as a single source of truth.

With the new integration to the current Eplan Platform, Version 2.7, users can exchange, later edit, and synchronise project data in any direction at all stages of the project.

Users no longer have to enter data more than once, thereby helping avoid entry errors.

Users in electrical design even have additional benefits – the allocation of PLC assemblies is transparent.

Assemblies can be more quickly edited with system support, and last-minute changes are easier and more universally implementable.

As a non-proprietary, standardised and XML-based data format, AutomationML can depict design information with respect to system topologies and structures, geometries and logic.

It offers fundamental object-oriented concepts that can be used to represent plant and system structures.

This allows for well-structured, end-to-end documentation, even for servicing and maintenance.

Data from various software tools – for example, device information – can be exchanged between manufacturers and users and easily integrated into the documentation, claim the companies.