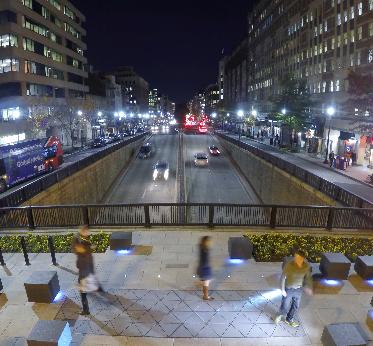 UK energy and data harvesting firm Pavegen has signed a Memorandum of Understanding (MoU) with global engineering and technology company Siemens, to bring its technology to smart city projects around the world.

Pavegen produces an interactive flooring technology which converts the kinetic energy of footfall into off-grid electricity, data and rewards. The firm is headquartered in London, with a research and development team in Cambridge, the UK’s tech hub.

Having delivered more than 200 installations around the world, the firm is looking to build on its portfolio of permanent installations which include transport hubs such as Heathrow, a park in Washington DC, schools, corporate HQs and sports facilities in cities including London, Rio and Seoul.

The Pavegen surface consists of a series of interlocking triangles. As people walk across the system, the top surface moves vertically by between 5mm and 10mm.

This downward force creates a rotation in the electro-magnetic generators below, which produces around 5 watts of continuous off-grid power for the duration of the footstep. The system also incorporates Low Power Bluetooth beacons which can reward users for their steps via apps.

Laurence Kemball-Cook, founder and CEO, Pavegen said: “Pavegen is all about putting people at the heart of smart city infrastructure. Siemens has the skills, resources and network to help us deploy at scale in key locations such as transport hubs and new build developments.”

Working together, the team will initially be targeting airport infrastructure, mixed-use developments and hospitals, and looking to integrate Pavegen technology into local distributed energy grids.