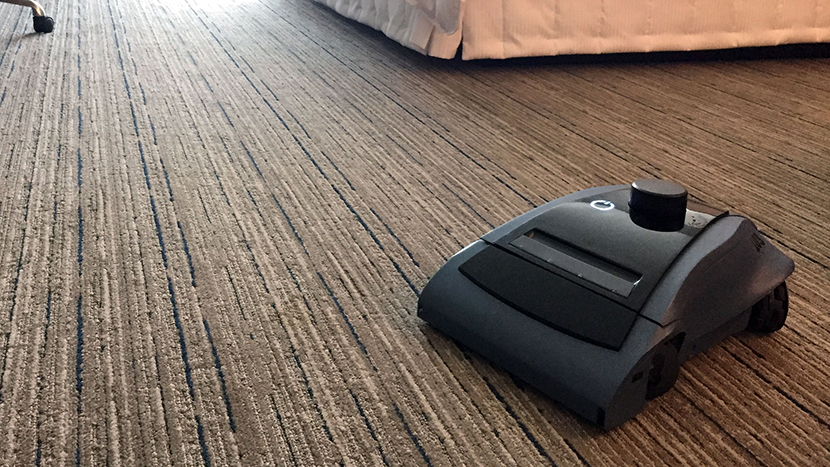 A company backed by PayPal founder Peter Thiel has launched a robot to provide room service at hotels.

Rosie the robot, which looks like a small robotic vacuum cleaner, has a number of data gathering functions which can help improve the operation of hotels and similar establishments.

The company that developed and launched Rosie is MaidBot, which has recently closed a new funding round.

Bissell is said to have led the investment round with participation from existing and new investors including 1517 Fund, Comet Labs, and Rough Draft Ventures, along with strategic hospitality and industrial cleaning organizations.

The investment will help the company expand its sales and marketing efforts, build out its engineering capabilities, and accelerate Maidbot’s transition to mass production.

The financing will also enable Maidbot to maintain the momentum it has built over the last year through successful pilot programs with some of the world’s leading hotel brands.

Ryan McLean, senior vice president with Bissell, said: “The value of Maidbot’s product offering goes well beyond the functional benefits of utilizing a robotic vacuum to assist with housekeeping operations.

“Their robots serve as mobile data platforms that generate a myriad of information on the building environment and operations that enables hotel operators to improve both the housekeeping and customer experiences.

“We have seen the adoption and impact of robotic vacuums in households, and we believe that we are going to see similar trends in commercial cleaning for spaces like hospitality and office.

“Maidbot is leading the robotic transition in the hospitality industry, and we are excited to collaborate with and support them as they work to build a great company in an exciting category.”

Maidbot’s first product, Rosie, is an autonomous floor cleaner that the company says “provides safe and cost-efficient automated solutions to the hospitality industry while collecting actionable data to empower managers and operators”.

Rosie decreases the time required to clean a room and reduces work-related injuries while improving the room attendant and guest experiences.

Housekeepers have one of the highest injury rates in the hotel industry and the entire private sector, according to a 2012 report by UCLA.

The Maidbot team saw an opportunity to bring innovation to an industry that was sorely lacking in the change department.

Micah Green, founder, and CEO of Maidbot, said: “It’s been the same for over 100 years. The biggest innovation in housekeeping has been an electric vacuum which came out in 1905.”

Through its early pilot programs, Maidbot has been able to demonstrate the benefits of innovation to several hotel operators and the industry appears to be ready for the change.

Green, who is also a Thiel Fellow and on the Forbes 30 under 30 list, added: “Although room attendants were unsure of Rosie at first, they love her now: they reported feeling a lot less back, shoulder, and wrist pain after just a few days and the operators appreciate happier team members.

“They have also told us that the data we can collect is just as valuable as the efficiency itself.”

The company says it will continue with its ongoing pilot programs through mid-2018 and expects to deliver its first products by late 2018.