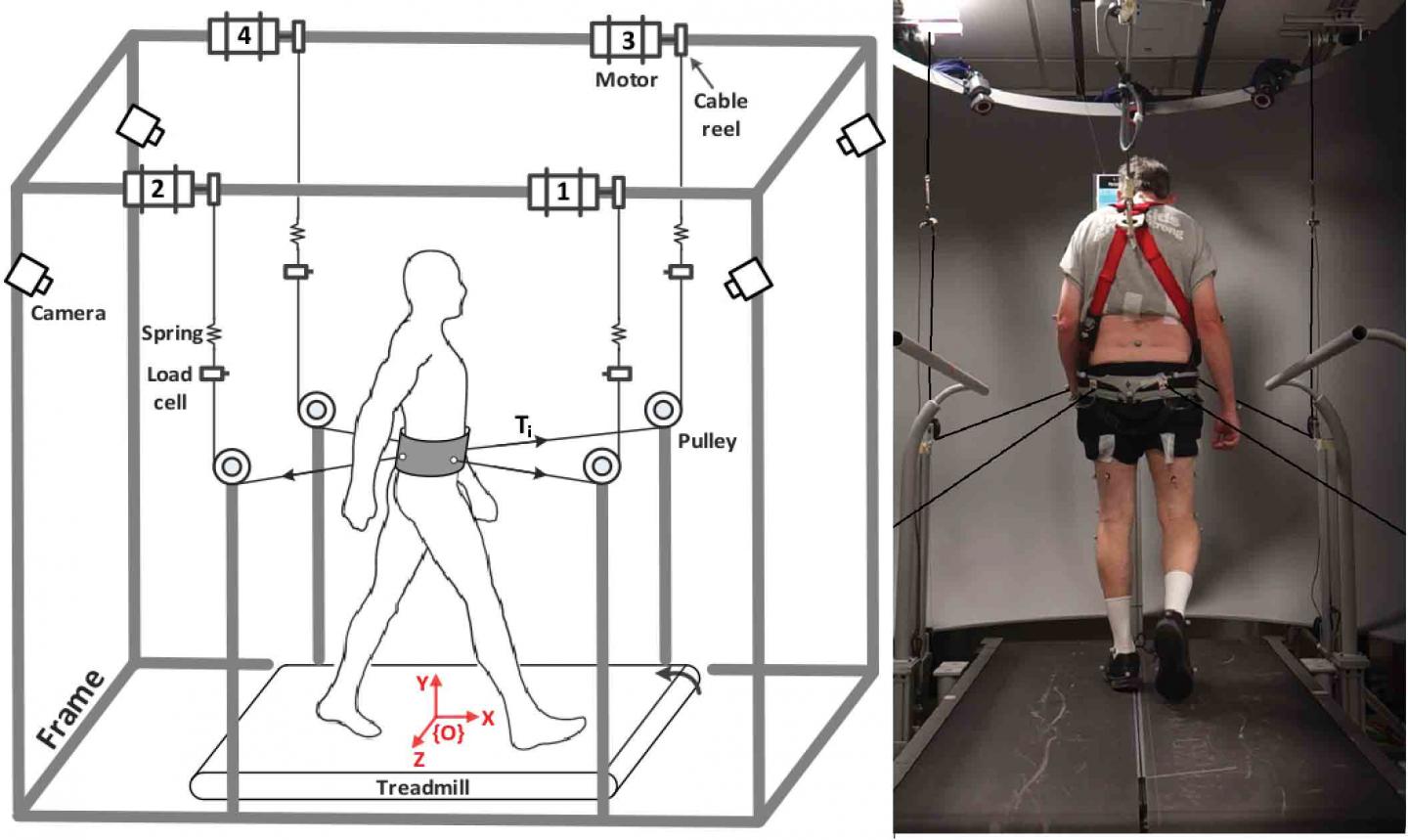 Some 50,000 people in the US are diagnosed with Parkinson’s disease every year.

The American Institute of Neurology estimates there are 1 million people affected with this neurodegenerative disorder, with 60 years as average age of onset.

Falls and fall-related injuries are a major issue for people with Parkinson’s up to 70 percent of advanced PD patients fall at least once a year and two-thirds suffer recurring falls.

These fall rates are twice as high as those of adults of comparable age, so improving balance in patients with Parkinson’s would provide a major health advantage.

Sunil Agrawal, professor of mechanical engineering and of rehabilitation and regenerative medicine at Columbia Engineering, along with Dario Martelli, a post-doctoral researcher in his group, have been working on this issue with Movement Disorders faculty from the department of neurology at Columbia University Medical Center, Stanley Fahn, a leading expert in Parkinson’s, and Un Jung Kang, division director, and Movement Disorder Fellow Lan Luo.

In their latest study, published today in Scientific Reports, the team looked at whether or not Parkinson’s disease affects patients’ balance and diminishes their ability to react and adapt to walking with perturbations.

The researchers found that the ability to adapt to multiple perturbations or to modify responses to changing amplitudes or directions was not affected by PD.

Both the Parkinson’s and the healthy subjects controlled their reactive strategies in the same way.

In fact, both groups improved their unperturbed walking after a single training session with repeated waist pull perturbations.

The TPAD is a wearable, lightweight cable-driven robot that can be programmed to provide forces on the pelvis in a desired direction as a subject walks on a treadmill. In an earlier study, Agrawal successfully used the TPAD to improve posture and walking in children with cerebral palsy.

“Most falls in PD are reported during walking, and gait disorders are one of the hallmarks of PD, but previous studies on PD subjects have focused on responses to balance perturbations only while standing,” says Agrawal, also a member of the Data Science Institute.

“Our TPAD has enabled us for the first time to study how subjects respond to repeated pelvic perturbations during walking, and to characterize reactive and adaptive responses to these perturbations among the young, old, and PD patients.”

The researchers evaluated the margin of stability and base of support while the study participants walked without cables on a treadmill.

Then the participants were hooked up to the TPAD’s cables and given waist-pull diagonal perturbations for brief periods to assess their reactions.

Each group was then trained with 72 randomly applied pelvic force perturbations that varied in direction (forward/backward/sideways), intensity (low/medium/high), and the specific foot (right/left) in contact with the ground.

After this training period, they walked freely without the cables and underwent the same diagonal perturbations they had been given before training.

These post-sessions were conducted to assess the effects of training on their balance and stability.

The team found that the Parkinson’s patients had a reduced stability in the forward direction before and after training compared to the healthy subjects and an inability to produce proactive anticipatory adjustments.

Once all the subjects completed the training session, both groups were able not only to improve their response to the perturbations, but also to produce short-term aftereffects of increased gait stability.

“This result is encouraging for designing new therapeutic interventions that remediate falls risk.”

Falls often happen unexpectedly when someone fails to recover from a loss of balance.

While current training methods, such as conventional exercises at the gym, target volitional movements of the body, they do not address the specific neuromuscular skills required for fall prevention.

“This novel TPAD provides an insight into the specific mechanisms underlying the propensity of PD patients to fall and the ability to address these specific deficits to train them to avoid falls. The potential impact of such training to prevent accompanying morbidity from the falls and to improve their quality of life is great,” Kang says.

Fahn notes, “We believe that new training programs, in coordination with new robotic devices such as Columbia Engineering’s TPAD, should be developed where unexpected force perturbations are given to the human subjects in a controlled way that allows the human brain to develop control strategies to respond to these perturbations, maintain balance, and avoid falls.”

The researchers are now planning future studies to examine if a multi-session training program will demonstrate more lasting effects on walking balance, improve function, and reduce the number of falls in long-term assessments.

The study is titled Adaptation of Stability during Perturbed Walking in Parkinson’s Disease.