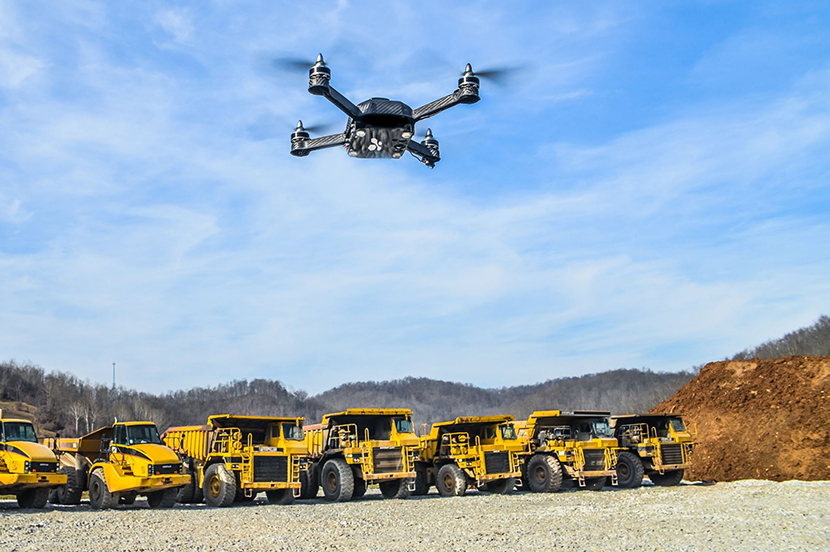 Drones are sweeping over the global mining industry and for good reason.

The future of mining will increasingly rely on the use of drones and automated systems, slashing costs while helping mining companies find and dig up more gold, silver and other metals and minerals.

According to a 2015 survey of 190 mining companies around the world, about two thirds of them were aiming to integrate remote operations and monitoring centers into their operations.

And in addition to improving safety and improving the management of mining operations, the push for automation was consistently stated as a top priority for most mining companies.

The reason for the use of drones, robots, driverless trucks, remote drilling and other areas of automation is obvious: they can dramatically slash the cost of exploration.

Instead of using helicopters or a field crew to survey an area, for instance, a drone can do the same job at a fraction of the cost and also save a huge amount of time.

Automation continues to sweep over the global mining industry because it can “save lives, and also save time and save money”, Mehmet Kizil, associate professor and mining-engineering program leader at the University of Queensland in Australia, told the WSJ. “The industry’s made a big jump in adopting this technology because the biggest cost in mining is labor.”

The miners that try to do it the ol’ fashioned way, with a pick and shovel, will be left in the dust.

Here are a few companies at the frontier of the new tech-craze in global gold and silver mining.

Barrick Gold is a top gold miner, with gold producing assets in Argentina, Canada, Peru, the Dominican Republic and the US.

At the end of 2016, Barrick Gold had 86 million ounces of proven and probably gold reserves.

Its core operations are located in Nevada, Peru, the Dominican Republic and Argentina.

Barrick has been a pioneer in the use of new technologies, such as drones, that dramatically cut costs and improve safety.

Barrick first began using drones in 2012, an early adopter because it recognized the enormous advantages of that drones bring to bear on mining operations.

Barrick uses drones at most of its mines, and at its Dominican Republic operation, it uses a drones every single day.

“Everyone in the industry is realizing the value of drones. They’ll soon become a standard practice,” Iain Allen, Barrick Gold’s senior manager for mining information technology, told Inside Unmanned Systems in late 2016. “There’s just too much value not to have one.”

Barrick first use drones to measure stockpiles, which was once a labor-intensive process using surveyors and GPS equipment that wasn’t all that accurate.

But the gold mining company now has drones do all of that measuring, eliminating several weeks of work in one pass.

Not only would the surveyor manually scan the area, but then he would have to crunch the numbers on his own.

Now a drone flies over an area, automatically uploads data to the cloud, and within hours it has a 3D model of the area it scanned – saving money, time and taking personnel out of harm’s way.

Barrick was hit hard by the downturn in commodity prices over the past few years, and its production fell as a result.

But it also managed to cut debt almost in half over the past half-decade through innovation and savings.

And after several years of contraction, the commodity bust is coming to an end, and Barrick will ride higher when prices rebound.

An intriguing option for investors is a smaller silver mining company called Montego Resources which is the 100 percent owner of a mine in Nevada that has been producing silver for more than a century.

Montego’s Taylor Mine is at the heart of a long-forgotten silver and gold boom, an area that was abandoned when pick-and-shovel miners no longer felt like the site was worth the trouble.

However, Montego is back, armed with new technology that will help it ‘re-discover’ a mountain of silver that lies beneath the Taylor Mine.

Montego will deploy drones to conduct 3D maps of the architecture of the subsurface, while using robo-drill methods to collect soil samples.

This will be done at a fraction of the cost of manned aerial surveys of yesteryear, and it will allow Montego to figure out exactly what it is dealing with before it drills.

The financials look great too. An estimated $27 million has already been spent on the project, so there is very little capex that needs to go into the project.

Meanwhile, the mine already has 20 million ounces of silver, and Montego is very confident that an upcoming drilling program will prove the site actually holds double that volume – 40 million oz.

They even say there is a chance that they could prove up 70-75 million oz.

That is a stunning scenario – Montego currently has a small $10 million market cap, but if it was sitting on 75 million oz, it would be in possession of over $1 billion in silver reserves.

The cherry on top is that Montego’s Taylor project also holds sizable volumes of gold, and the geology shows Carlin-style mineralization of 1.7 grams per ton of gold.

Headed up by an experienced management team with geologists and capital-markets experts, Montego is rearing to go in early 2018.

The executives are extremely confident in Montego’s next steps: a January drilling program will ‘re-discover’ huge volumes of silver, a near-term catalyst that will catapult the company’s valuation higher.

It is the second-largest primary silver producer in the world and also holds the fourth-largest silver reserves at 286 million oz (proven and probable).

The Vancouver based miner is one of the best ways to play silver prices, which are currently trading at about a third of their highs last seen in 2011.

Silver has been battered in recent years, but the market is in the midst of turning a corner.

Last year saw an uptick in interest from investors, on geopolitical uncertainty. Also, 2016 saw the largest supply deficit in three years at 147 million oz, according to Thomson Reuters.

That supply gap was in part due to a small decline in production in 2016, the first time that occurred since 2002. After years of getting hammered, prices shot up more than 9 percent, the first increase in a half-decade.

Pan American has several mine expansions ramping up, including the La Colorada and Dolores mines in Mexico, while also stepping up exploration in Argentina.

Meanwhile, the mining giant is a 100 percent owner of the Navidad asset (also in Argentina), one of the world’s largest undeveloped silver deposits, although that project has been held up by provincial laws in Argentina.

Pan American has a very low cost of production at $5.04/oz, or an all-in sustaining cost per silver ounce sold (AISCSOS) of $10.77.

The management team, with a track record of success, continues to push mechanization and automation at many of its mines, which helps keep costs low.

Ambarella Inc. is as semiconductor and image processing company and develops low-power high-definition video products. Ambarella made waves at the 2017 Consumer Electronics Show when it announced the H22 chip for cameras in drones.

It films 4K HD video that comes equipped with electronic image stabilization, cutting out the need for the gimbals that are often found on drones.

Gimbals allow cameras to pivot without causing the camera to shake, but they are heavy, which means shorter flight times.

But Ambarella’s H22 chip could take drone use to the next level by eliminating unnecessary weight.

The exciting thing about what Ambarella is offering is that most drone manufacturers are still using gimbals, which means the market for Ambarella is massive.

Meanwhile, Ambarella also unveiled its H3 chip earlier this year, which is used in 8K Ultra HD video for higher-end drones, according to MarketWatch. 8K offers 16 times the resolution of HD.

In short, Ambarella is the market leader for the cameras used in commercial drone technology, giving it huge upside potential as the mining industry continuously shifts in that direction.

Hecla Mining Company is the oldest silver and gold mining company in North America and it is currently the largest primary silver producer in the US.

Hecla has added nearly 300 million oz of silver reserves in the last 10 years.

But even better, as Hecla’s management likes to say, not all silver ounces are equal. Hecla operates in the US, Canada and Mexico, negating much of the country risk seen in many other parts of the world.

It has four key mines, located in Idaho, Alaska, Quebec and Durango, Mexico.

Hecla’s cost structure is highly attractive, one of the lowest in the business, with AISC of $9.97/oz in the second quarter of 2017.

Hecla pursues innovation and automation to keep those costs low. Hecla is automating its Greens Creek project in Alaska. And instead of the pick axes of the past, Hecla’s shaft operators use rock breakers from behind computer screens at the surface.

It is experimenting with mechanical cutting to eliminate the need to drill and blast, which the company believes will revolutionize mining.

Hecla also uses drilling automation that allows for drilling during shift change, significantly reducing the cost and time of drilling.

Goldcorp (NYSE: GG) is a massive precious metals company based in Canada. Goldcorp’s properties, however, extend to the US, Mexico, Central America, and all the way to Argentina and Chile.

Its primary product is gold, and it is the world’s fourth-largest gold producer.