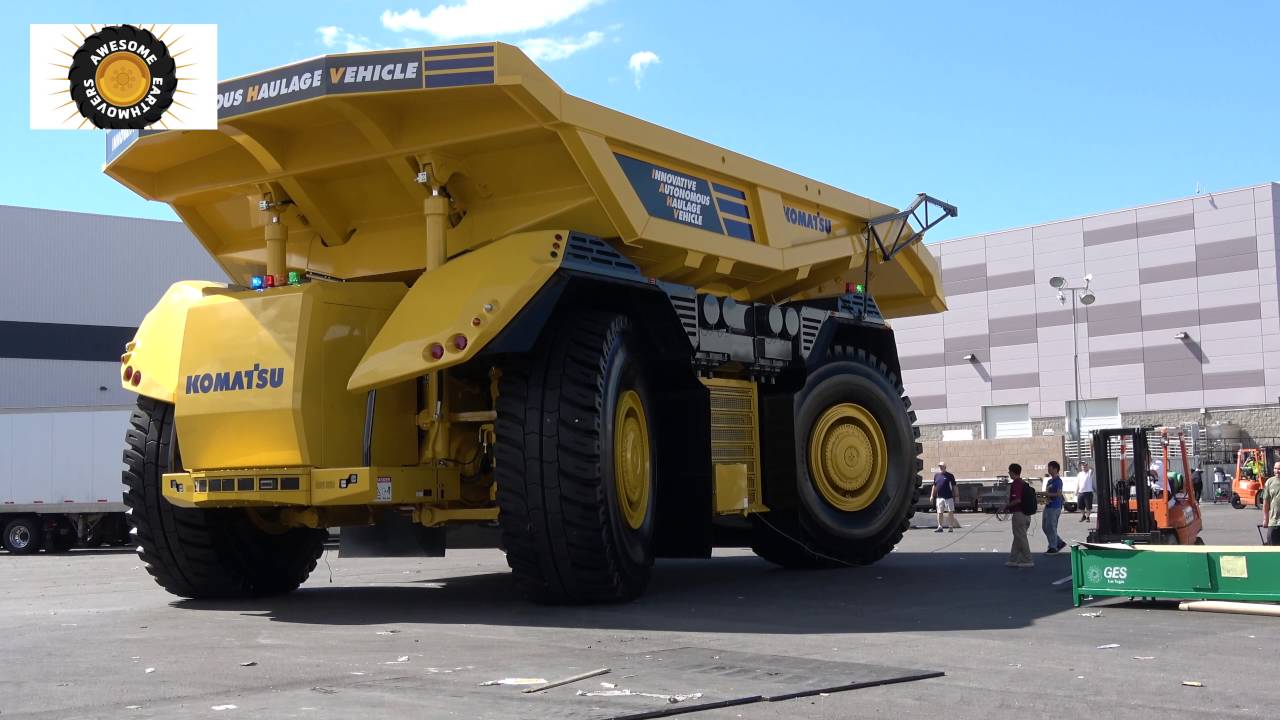 The trucks used in the mining industry are so large that they’re only suitable for 20-foot-tall giant aliens.

Which is okay for the many archaeologists who claim to have found giant alien bones suggesting a race of beings of said height roamed Earth many thousands of years ago.

These giants of old were said to be super-intelligent beings – due to their presumably super-large brains – and probably built the pyramids and other megalithic structures around the world.

Then they left, disappeared, some time before smaller, modern, less intelligent humans took over Earth, probably returning to the Planet Nibiru or wherever they came from.

Some day, however, they will return, according to the ancient alien giant astronaut theorists and their supporters. And when they do, one of the only vehicles large enough to accommodate their supermassive frames will be the trucks used in mining.

That is also okay because ancient alien giants were only ever interested in Earth for its natural resources, such as granite and other stone, as well as precious metals – in particular, gold.

Rio Tinto, one of the largest mining companies in the world, understands this, and is planning something that the ancient giant aliens will surely appreciate – the company is making its trucks autonomous.

So, not only will the vehicles be the right size, the alien giants won’t even have to drive them manually, or alienly, or however they would have driven them otherwise.

The trucks Rio Tinto uses are originally built by Komatsu, which manufactures a range of industrial vehicles including bulldozers, excavators and boring machines.

Rio Tinto plans to install the “Autonomous Haul System” into its Komatsu “dump trucks”, each of which is about 15 feet in height, 35 feet in length, and 20 feet in width – and about 20 times the volume size of an average car.

The AHS is something Komatsu developed to free up humans from working in what are often hostile and remote conditions, as mines almost always are.

Of course, autonomous vehicles reduce operating costs because the humans lose that part of the mining job, but safety, productivity and efficiency are among some of the gains.

In any event, if one of those mines unearths a giant alien base which has remained underground for thousands of years and is still operational, perhaps the average human mine worker would rather not be in close proximity.

According to researcher Michael Tellinger, one of the most spectacular signs of ancient alien astronaut intelligence is the fact that all the megalithic structures that still remain standing on Earth thousands of years after they were built all have a shape, structure and arrangement similar to what can be found inside modern computers.

Yes, Tellinger believes ancient stone buildings were part of what he calls “macrocomputers”, in contrast to today’s microcomputers.

In other words, the alien astronauts or whoever built the stone structures had turned Earth into one gigantic motherboard, and each of those buildings functioned as some sort of processor, or “macroprocessor” as Tellinger calls it.

As Tellinger postulates on his many speaking tours, the pyramids and other ancient stone structures were much more than temples – if they were temples at all.

“The more I looked at them [the ancient stoned structures], the more I realised … that they weren’t temples, they were actually templates, and we’re actually looking at gigantic energy circuits – circuit boards on a gigantic scale that we could never have imagined… it’s beyond our imagination.

“The scale that these guys [ancient giant aliens or whoever] were building on is something way out of our perception because we don’t have enough money to do that.

“We are told these were just buildings in which people lived and they were just places of worship. No – these are macroprocessors and this is a circuit board.

“When you realise that, you start seeing things.”

Tellinger also claims to have found millions of smaller ancient structures in South Africa which were most likely used for gold mining, the way Tellinger sees things (example pic below).

These smaller structures were mostly far simpler stone circles, and the conventional archaeological view is that they were cattle corrals – places in which animals were penned in.

But Tellinger points out that none of the millions of stone circles he has found across most of southern Africa had any entrance or exit points – no gates or doors; and each was of a different design, and they were all near what look like specially constructed small canals, presumably for liquids relating to the refining of gold to flow along.

They used the gold to build electronics technology of some sort and the megalithic structures were chips and components on a sort of circuit board which could pick up energies, frequencies, sounds, vibrations and all sorts of other things none of which there is even the tiniest amount of evidence for, except for what Tellinger says he has seen.

But what is more likely, however, is that if the alien giant astronaut miners do come back to Earth, they’ll probably appreciate being driven around by an autonomous truck and seeing how mining is somewhat less difficult than it was back in their day or back on their planet or dimension or whatever.