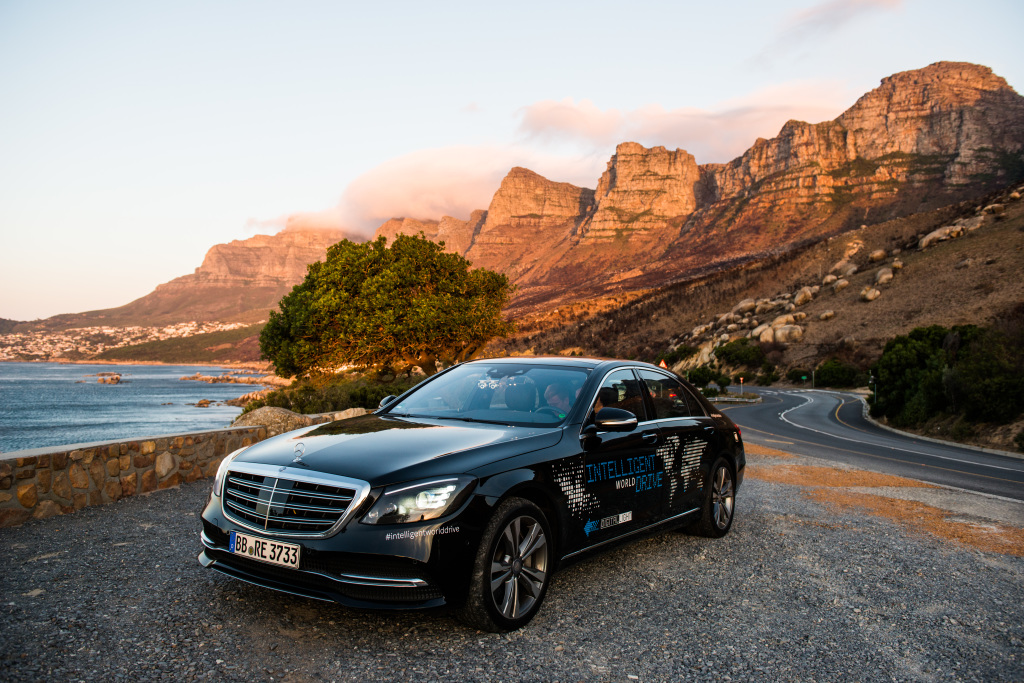 Road traffic in South Africa poses some very special challenges: different road surfaces, wild animals on the road and many pedestrians in both urban traffic and on national roads, which often cross the road completely unexpectedly.

Automated and autonomous vehicles must take these special features into account and respond reliably.

On the fourth leg of the Mercedes-Benz Intelligent World Drive, the test vehicle, which is based on the S-Class series sedan, presents its South African peculiarities in automated test drives in the Western Cape Province and in Cape Town.

The aim is to gain global insights into real traffic conditions for the further development of technologies.

The test vehicle will gather comprehensive information in a large number of complex traffic situations on five continents by January 2018, exploring the limits of current systems.

The focus of the test drives on the Western Cape lies in particular on pedestrian detection in many unfamiliar situations in dense city traffic as well as on country roads.

Whether city or country – many pedestrians are travelling in South Africa. Sometimes they run on the road and often they cross the road completely unexpectedly.

In the extremely dense city traffic in Cape Town, driving is thus a true precision task – especially in narrow streets, where the sidewalks are mostly parked on both sides.

But even on national roads outside towns and even on the highway motorists always have to count on crossing pedestrians. The number of accidents is correspondingly high.

Cameras and radar systems need to detect the passers-by and interpret their movement correctly, so that the vehicle can react in milliseconds in an emergency.

Another distinctive feature is traffic signs, which exist only in the 15 member states of the Southern African Development Community, such as South Africa, Namibia, Botswana or the Seychelles.

For example, the no-stop sign shows a crossed-out “S” in a red circle, and the no-entry sign consists of two horizontal bars in a red circle. In addition, the signage in South African traffic is often sketchy.

Intersections where stopping is not always marked with a stop sign, but sometimes only with the broad white cross line on the road.

Also, warning signs in front of the widespread “bumpers” for speed limit are not available everywhere or placed so close to the obstacles that hardly any reaction time remains.

The lack of signage poses extreme challenges to the performance of the camera and radar systems, as well as the quality of digital map data, so that automated driving functions such as the “Distronic Active Distance Assist” with distance-based speed adaptation work reliably.

The validation of Here current digital map material, therefore, places a special focus on the Western Cape test drives – especially with regard to intersections where the vehicle must stop and traffic obstructions such as speed bumps.

In addition to the country-specific features, Mercedes-Benz is testing a headlamp prototype of the innovative Digital Light technology.

Because light also plays a central role on the way to automated and autonomous mobility.

The glare-free long-life HD quality remote has chips with more than one million micromirrors and thus pixels per headlamp.

Thus, it achieves ideal light distribution in every driving situation – without dazzling other road users.

In addition, Mercedes says the “revolutionary” lighting system enables functions to be used in the 2015 F 015 Luxury in Motion research vehicle.

Among other things, it can project light trails onto the street to communicate with the environment.

The special features in South Africa show how important it is to gather insights into real traffic on the way to autonomous driving and to adapt automated driving functions to the respective traffic habits and conditions.

For this reason, Mercedes-Benz is testing automated driving functions on five continents with the Intelligent World Drive, collecting valuable information for further developing the technologies.

After the first test drive in September on highways and in traffic jams in Germany, the test vehicle based on the S-Class in October faced the extremely dense traffic flow and its peculiarities in the metropolis of Shanghai.

After South Africa, the S-Class test vehicle will face US road traffic in January on its final leg.

The test drive in Greater Los Angeles and then to the Consumer Electronics Show in Las Vegas focuses on the assessment of driving behavior in dense city traffic and congestion situations as well as right-crossing traffic on highways.

Case – on the way to autonomous driving

Over the past seven years, Mercedes-Benz has carried out around 5,100 test drives around the world to secure the field of driver assistance systems with 175 test vehicles.

Much of this took place in the context of customer-oriented driving tests. At around 9.5 million kilometers in Europe, the US, China, Australia and South Africa, the performance of driver assistance systems was evaluated and more than 1.2 million measurements were carried out for their continuous development, especially in real traffic situations.

Autonomous driving is one of the four strategic future fields that are an integral part of the corporate strategy of Daimler under the term “Case”.

The letters in the word “Case” stand for Connected, Autonomous, Flexible (shared and services) and Electric (electric).

The goal is to create intuitive mobility for the customer through the intelligent integration of all four Case fields.