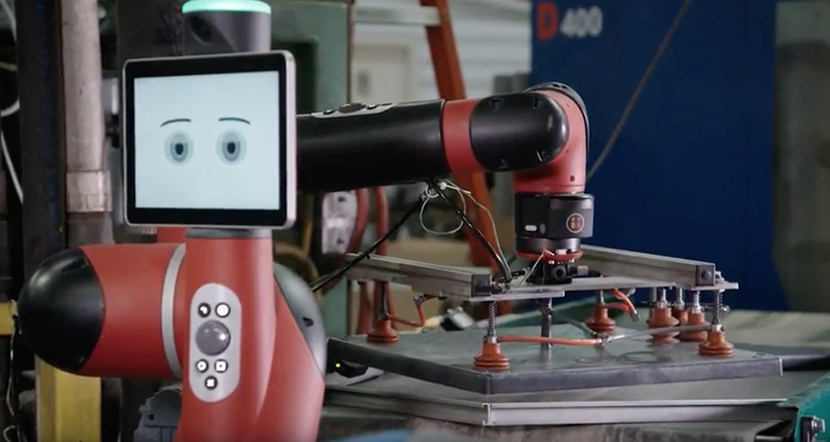 Harrison bosses say they were able to integrate Sawyer into their process “within hours”.

The company says it is reducing labor costs and increasing throughput by using Sawyer in ergonomically challenging tasks. (See video below.)

Sawyer also helped improve part consistency and quality by degating plastic parts and passing them on for packaging, a repetitive task that can often lead to human error and injury.

Degating is the process of removing the gate from a plastic molded device. The gate is the opening in a mold through which the molten plastic is injected into the final part.

Sawyer allows Harrison’s employees to thrive in other positions by taking on the degating task that can lead to wrist strain and injury.

Scott Harrison, founder and president, Harrison Manufacturing, says: “We’ve been seeking an automation solution for this task for some time, but traditional methods weren’t affordable or effective for our situation.

“As soon as we heard about Sawyer, we knew we’d found the answer. Sawyer allowed us to use our employees in less strenuous tasks, while increasing throughput with extended shifts, so we can better meet growing customer demands.”

Founded in 2005, Harrison Manufacturing focuses on injection molding and light value-added assembly for the automotive and consumer industries.

A family-owned manufacturer with high-volume operations, Harrison does not have the floor space for large safety caging units that most traditional robots require, making Sawyer’s small footprint ideal.

Sawyer is utilised in a task where it degates plastic parts and passes them on for packaging.

The robot allows Harrison to run additional shifts in a position that was physically challenging to staff, and performs the tasks more consistently than a human, leading to better part quality.

Jim Lawton, COO, Rethink Robotics, says: “Repetitive, ergonomically-challenging tasks are prime for automation, and Harrison Manufacturing is a great example of how Sawyer can drive value in several ways.

“From reduced worker strain to increased throughput and part consistency, manufacturers that leverage adaptable, smart robots are improving their manufacturing processes in a significant way.”

Harrison will soon be implementing a second Sawyer robot in another section of the assembly line.

After the first robot degates the part and places it on the conveyor, the next robot will accept the part, package it and alert a person to palletize it.

The Harrison team is also considering deploying Sawyer in a variety of other tasks, including part inspection, quality assurance, pick and place and line loading and unloading.

Harrison says: “I have another Sawyer in the box. After our experience of quick deployment with the first robot, I expect it to be up and running just as smoothly as before.”