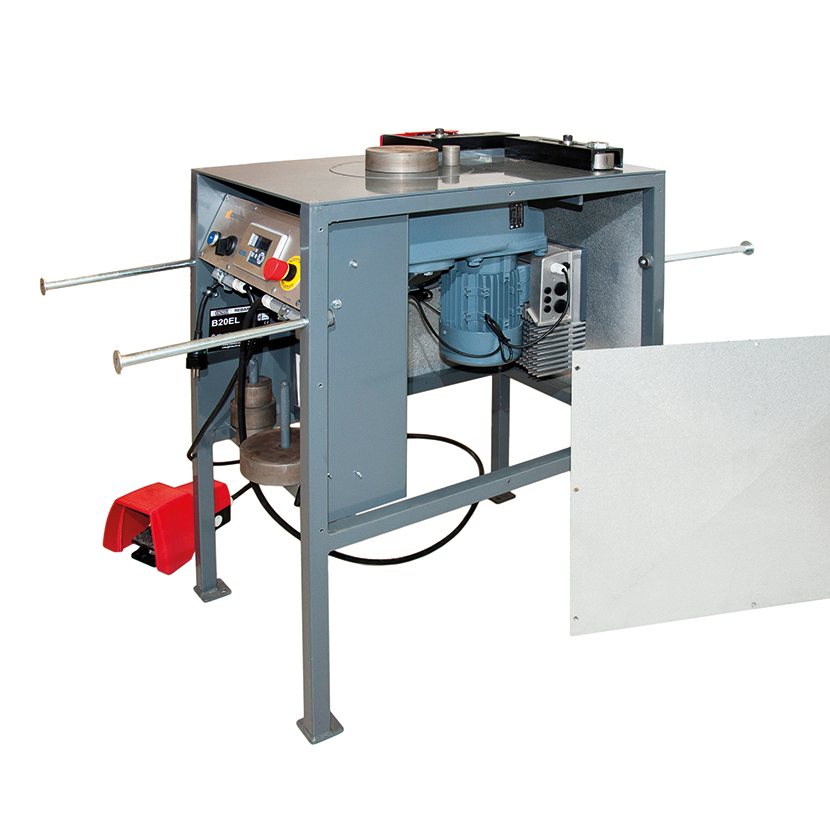 Looking for ways to improve their machines’ usability and to economize on manufacturing costs, the Swedish company Comeco decided to launch a new line of rebar benders with electric drives instead of hydraulics.

Nord DriveSystems supported the company from the early planning phase through to production, configuring an AC vector drive with an integrated programmable logic controller that controls all machine functions.

The current solution is simpler, more robust, and easier to maintain, says Comeco. In addition to substantial savings for procured parts, the assembly time was halved.

Working with Nord DriveSystems, they have retrofitted one line for rebar diameters up to 20 mm with electric drives and are currently following it up with another line for up to 40 mm.

When Comeco first designed rebar benders, they used hydraulics, a common choice for such machines.

But the specialists for construction-site machinery found several problems with the tried and tested technology.

“The electric system is very complex. Installing the hydraulic power unit, piping network, and sensors takes a lot of time.

“This machine design is much more complex and more prone to problems than our new electromechanical machines.”

“Analyzing competitors’ designs,” Hallberg recalls, “we found that we could build the machines cheaper with an electric drive.

“It was important to us, that we would integrate top-of-the-line functionality and provide more user value and comfort than the available low-end machines.”

As per Comeco’s wishes, all machine functions were to be controlled by a PLC. Nord proposed the Nordac FLEX AC vector drive.

The motor-mounted inverter integrates a PLC for precise speed control and positioning.

Machine operators can select from two speed settings according to their skill level and the thickness of the steel bar.

The 20 mm machine allows two angles to be programmed at a time – operators can then conveniently go from one setting to the other with a switch button.

The parallel-shaft geared motors of these drive systems deliver high torques at a very compact size.

The drives are delivered pre-assembled and pre-parameterized with a ParameterBox, which Comeco takes as is and installs in the machine operation panel.

Instead of complex wiring of the hydraulic control system, the electronic drive only needs a power connection.

“We certainly save money here as well,” says Hallberg. “The ParameterBox saves us a lot of switches.

“Nord delivered it with the buttons and the display programmed according to our specifications.

“You change the angle with the up and down arrows, the speed with right and left. It is very simple. Operators do not need to navigate through a menu.”

After bending, the PLC reverses the drive for easy and safe removal of the rebar.

“The simpler machines do this by means of springs,” says Hallberg. “A spring is of course another mechanical part that can fail. We prefer our new state-of-the-art electronic solution. It is much safer.”

In the addition to an emergency stop button, the machine also stops if a plate near the infeed is touched – for instance, because a glove has been caught on a rough metal part.

“One advantage of using Nord instead of hydraulics,” Hallberg adds, “is that the motor is not jammed. That way, you can manually remove the piece of rebar.”

The gears run so smoothly that removing an obstacle from the machine in any direction is not a problem.

Nord DriveSystem in Sweden was among the first foreign subsidiaries Nord founded in 1979.

Hallberg happened upon the Nord brand when he was giving another bending machine a closer look.

“It was an old Weelu bender using Nord components. We called the telephone number that was given on the old machine parts, and the sales representative reacted promptly.

“We discussed our needs, and he came back to us with a projected new drive solution in the next days. We worked out the finer details with a drive engineer. We received excellent service across the board. It took about six months until we had the first 10 machines for customers who agreed to test them. They reacted well.

“If you have used this machine once, I think, you will not ever want to give it up. The machines with Nord drives are much easier to use than the hydraulics ones.

“Customers or any repair shop can fix most problems themselves. However, repairs are hardly ever necessary.

“Our new machine design is much more hard-wearing both compared to hydraulics-based machines and low-cost, low-end machines.

“Our bending systems last more than ten years. This kind of quality convinces our customers.”

From the manufacturer’s point of view, too, the project has proven successful.

“We save a lot of money. And time! One hydraulic machine takes about four days to build,” says Hallberg.

“With the Nord system, we only need two days. Including the assembly time, we will probably save about SEK 30,000 ($3,550) on the bigger machines we are developing now. That is more than 15 per cent of the end price.”