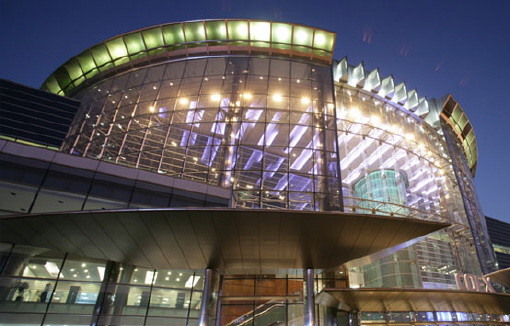 The organisers say there was a record number of exhibitors at this year’s event, with a total of 1,193 booths occupied by 397 companies this year – the “highest in history”, they say.

The organisers add: “For the expo next year, we aim to have 1,300 booths of 500 companies and 30,000 visitors with a differentiated strategy.”

The Smart Factory Expo 2018 preliminary brief was held with Coex and the Korea Smart Manufacturing Industry Association, whose chairman, Kim Tae-hwan, was in attendance.

The presentation announced the 2018 exhibition / conference steering committees. After the brief, there was networking time between the participating companies.

Center head Song Byeong-hun of the Korea Smart Factory Foundation said: “This year, Smart Factory Expo and Automation World were held together, and I think it was timely.

“What is most important for any expo is that it has to be helpful for businesses. To vitalize the expo, people should feel the need to participate in it, and to make them feel it, the outcome must be perfect.”

He also said: “The steering committee will consider content and a killer app, which would make the expo effective and successful.

“By listening to the opinion of the industrial field and reflecting on it, we will make a fruitful expo.”

According to Deputy Head Ahn Jeong-ho of Coex, the number of visitors at the 2017 Automation World + Smart Factory Expo was 27,226, a 24 per cent increase compared to the previous year.

The most important purpose of visiting was to collect information on new product/technology with 48.8 per cent, followed by the intent to grasp the trend of the field (17.8 per cent) and to investigate purchases and secure new transactions earlier (15.7 per cent).

The secretariat for the 2018 expo is planning to use new and innovative methods to encourage more visitors to attend.

For the satisfaction on business promotion and image improvement, 50.5 per cent of participating companies were satisfied.

Deputy Ahn said: “To reinforce a new customer search, displays that reflect the main purposes of the visitors who are collecting information on new product/technology and grasping the trend of the field is needed.”

With various events and differentiated composition, it aims for 1,300 booths of 500 companies and 30,000 visitors.

More than 10 specialized conferences are planned, and a future factory theme by the manufacturing industry will be formed with oil and gas, automotive and cosmetic as its core.

Deputy Ahn says that, to differentiate from other expos, they formed an Expo & Conference Organizing Committee, which is going to create an organizing committee connecting industries-universities-institutes and develop it as an expo and conference that will follow industry trends.

Also, by forming special rooms for process automation, it is planning to induce additional visitors through a Smart Factory model expo and conference.

By organizing a foreign expo inspection group – which visited SPS IPC Drives – it is going to “reinforce a business network and foreign cooperation”.

Moreover, a visitor inducing program through DB marketing, Radio ads, outdoor ads and banners and search ads will be conducted.