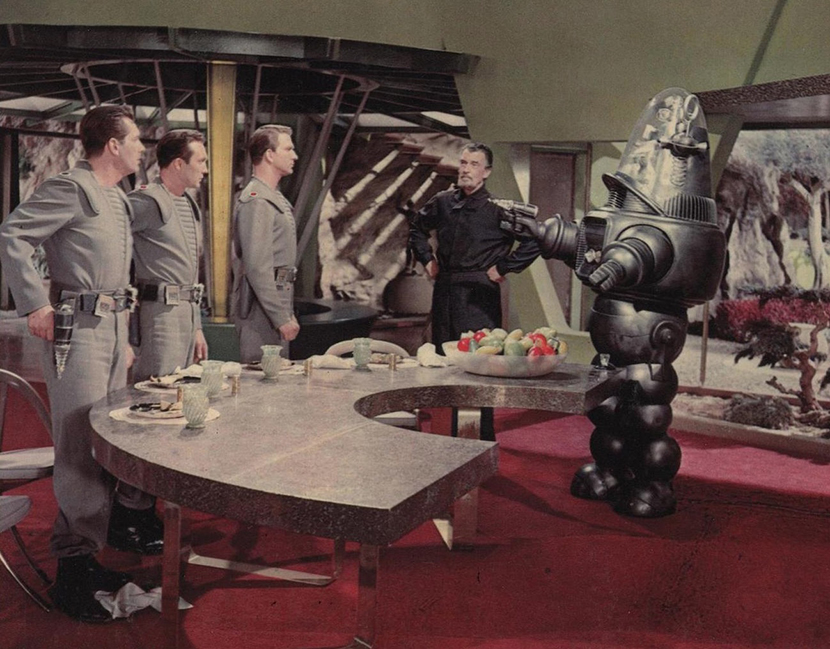 The alien robot which starred in the classic 1956 science fiction film Forbidden Planet has just walked off with $5.375 million in New York.

Robby the Robot was last seen celebrating his film’s winning of an Academy Award for special effects.

The sale of Robby was part of an auction of memorabilia, owned by Turner Classic Movies.

The price Robby fetched surpassed previous auctions for movie memorabilia, in which $4.6 million was raised for Marilyn Monroe’s white dress from The Seven Year Itch, and the $4.6 million for the original Batmobile.

It’s not yet known who bought Robby, or the other memorabilia, but the auctioneer said the robot was originally built by MGM film studios for the “gigantic sum” of $100,000.

Robby’s “sax valves”, “gyroscopes”, and other “marvelous trappings” were “a pinnacle of 1950s futurism”, claimed Bonhams before the auction.

The auctioneer added that the “comical, winning personality” of Robby “marked a major shift in movie robots”.

Now, after the sale, Bonhams is reflecting on the results of its hard-sell tactics.

Bonhams says Robby and his Jeep – which was included in the sale – was the subject of a “four-way battle”.

After the sale, Dr Catherine Williamson, director of entertainment memorabilia at Bonhams, said: “This is an out-of-this-world result for one of the most loved items in movie history.

“Robby the Robot is one of those symbols of American culture that is embedded in our DNA.

“We are thrilled for the consignor, William Malone, who has cared for Robby for so many years and we are delighted that so many of Robby’s fans took the once-in-a-lifetime opportunity to see him at Bonhams.”

Robby’s previous owner, filmmaker and collector, William Malone, who brought the robot to auction, said: “I’m astounded by the result, but also sad to part with him.

“However, it’s time Robby finds a place where he can be displayed, and with someone who can look after him. Of course, he will leave an empty spot in my house – and in my heart.”