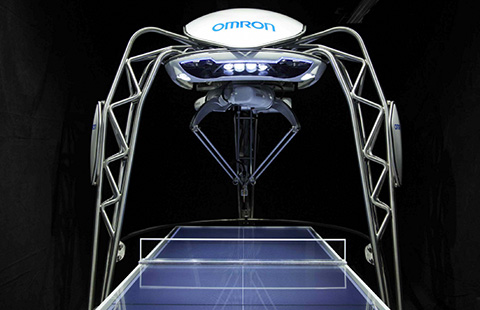 Most notably, with two onboard robots at work, Forpheus becomes now the world’s first robot to have the ability to toss the ball and hit a serve.

Omron has aimed at achieving human-machine harmony since introducing Forpheus to the world in 2013, continuing to advance this technology on the core idea of having machines that draw out human capability.

Now in its fourth generation, Omron says this year’s Forpheus – which stands for Future Omron Robotics Technology for Exploring Possibility of Harmonized aUtomation with Sinic Theoretics – comes with a new axis in its evolution.

Omron has expanded the range of talent that Forpheus can accommodate in its rally opponents, developing this table tennis robot with the goal of allowing more people to enjoy rallies and have their capabilities pushed – creating a machine that understands the characteristics of a person and will adapt its dealings with them accordingly.

Last year saw Omron implement its time-series deep learning AI technology, making it possible for Forpheus to take what it has learnt and use this to make judgments about its opponent’s level of play and match this level in its returns.

Having Forpheus understand its opponent’s level of play and return the ball accordingly has allowed many people to enjoy playing rallies with this table tennis robot.

Those who have been able to challenge Forpheus to a rally have numbered in the hundreds or higher, with exhibitions overseas allowing for the experience outside of Japan as well.

However, a variety of factors at play meant that some were not able to fully enjoy these table tennis rallies.

Advanced players who delivered smashes would find their rallies draw to an end right then and there; in the case of beginners, there was the difficulty of tossing the ball and serving it themselves – the failure to do so preventing any enjoyment to be had before the rally even got under way.

With this, the fourth-generation Forpheus comes outfitted with the functionality to deal with the smashes that advanced players want to throw at it, as well as functionality for taking over serving duties for those beginners who struggle with this opening play.

Furthermore, Forpheus is now implemented with functionality to take rally outcomes and use this information to provide feedback through music and commentary.

In sensing the growing level of exaltation as play proceeds and being able to instill motivation for the player to feel that continuing in the rallies is fun, Forpheus has evolved to become a robot that can be enjoyed by beginners through to advanced players.

New features in the fourth-generation Forpheus

The serve functionality in Forpheus aids in opening a rally by having the robot take on this responsibility in place of opponents at the beginner level, some 30 percent of whom fail with their serves.

A newly added articulated robot (Omron Viper650) for tossing the ball and two controllers used by Forpheus are synchronously controlled at under 1/100ths of a second to result in two robot types working together to toss the ball and serve it just like a person.

The smash-handling functionality in Forpheus serves to deal with the smashes that more advanced players like to engage in, enabling enjoyment of table tennis at a higher level.

By using a human body sensor to detect its opponent’s movement and analyzing this information using time-series deep learning AI technology, Forpheus reads the signs of a smash hit coming from the opponent.

When the table tennis robot determines that its opponent is going to go for a smash hit, it predicts where the ball will be delivered and gets into ready position.

Furthermore, with an accelerated algorithm for tracking the ball, Forpheus is now capable of dealing with smashes of 40-80 kilometers per hour.

The technologies used in the development of Forpheus hold the promise of being useful in Omron’s business pursuits to create a better society.

The synchronous control and algorithm-accelerating technology at work in the robot are being utilized in manufacturing sites, such as for bulk picking.

Furthermore, Omron says its “world-first” Onboard Driver Monitoring Sensor, announced several days ago, was developed using the same time-series deep learning AI technology as that employed in the fourth-generation Forpheus.

Omron will continue to use developments in the Forpheus table tennis robot to better understand the intentions of people, such in a way to understand the state and characteristics of individuals and provide feedback on these indicators, advancing the company’s Sensing & Control + Think core technology.

Omron says it will then use this to contribute to the creation of a better society – one achieved through machines getting a deeper understanding of people and providing optimal assistance to realize a human-machine harmony that brings out human capabilities and creativity.