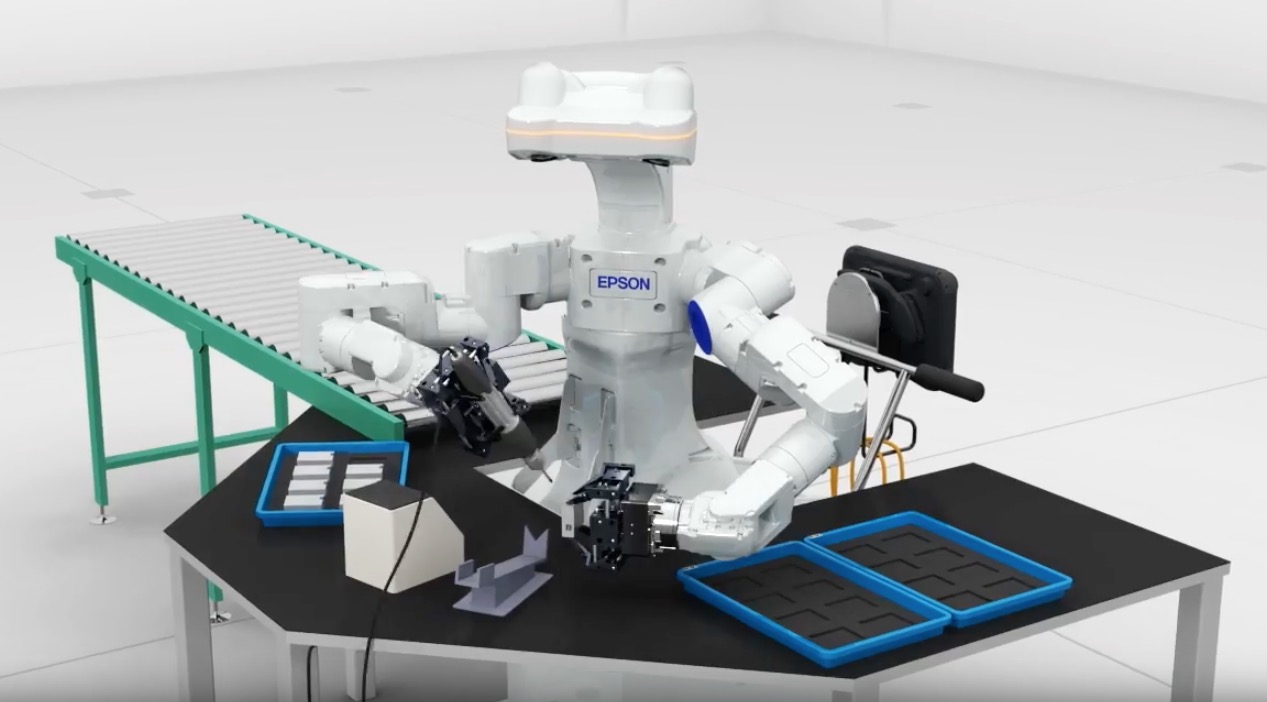 Epson has commercialized what it calls a “seeing, sensing, thinking, working” autonomous dual-arm robot that the company says “will expand the scope of automated production”.

Epson says it will roll out the new robot, named the WorkSense W-01 (main picture and video below), in stages beginning this coming winter.

The company says that, in recent years, manufacturers’ needs have grown more diverse with demand for products fluctuating sharply and a growing necessity to flexibly accommodate small-lot production and just-in-time production.

Industrial robots are conventionally installed in a fixed location on a line to perform a given task.

The WorkSense W-01, however, was developed for easy mobility so that it can be wheeled from place to place to perform assembly, transport, and other tasks.

Epson says the features of the robot, described below, enable it to automate production tasks that previously “defied automation”.

Seeing: The robot is equipped with four head-unit cameras and 2 arm-mounted cameras that give the robot human-like vision, enabling it to accurately detect an object’s position and orientation in three-dimensional space.

And even if the location of objects and obstacles changes, the robot is able to independently “see” and determine their position.

Sensing: The robot arms are outfitted with Epson’s highly sensitive, precision force sensors, which are already available on sale.

The robot is thus able to perform delicate assembly, transport, and other tasks that require human-like force control to avoid damaging objects.

Multipurpose hands that can grasp, grip, and clamp objects of various shapes and sizes are included as standard end-of-arm tooling.

They can manipulate tools and jigs that were designed for humans.

Thinking: The robot is able to accurately detect the position and orientation of objects in three-dimensional space, so even if the robot is relocated, it can immediately start work with no programming change required.

This gives the robot the ability to flexibly adapt to sudden changes in production.

So, for example, it can be wheeled to different locations to perform different tasks every day, if need be.

The robot independently decides the path and orientation of its 7-axis arms and is able to avoid obstacles.

The dual arms move independently from one another to allow the robot to perform tasks that a single-arm robot cannot, such as tightening a screw in a component with one arm while holding the component in place with the other.

The WorkSense brand name was coined to represent the concept of a robot that sees, senses, thinks, and works.

With its WorkSense robot, Epson is targeting market segments where demand for small-lot production and JIT production are particularly high, such as automotive parts production.

“We are refining our core technologies that combine sensors and smart features, as well as our efficient, compact, and precision technologies, with the aim of realizing a future in which robots are widely used to serve and support people.

“We see the WorkSense W-01, which harnesses the power of Epson’s deep portfolio of technology, as bringing us one step closer to bringing about such a future.”

The WorkSense W-01 will be on display at International Robot Exhibition 2017, which will be held in Tokyo, Japan, from November 29 to December 2.