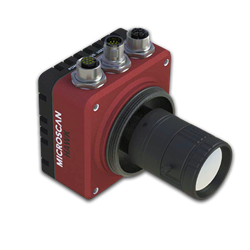 Omron Microscan Systems, has launched its newest smart camera, the Hawk MV-4000, which the company says has developmental roots stretching back to automotive and robotics development.

Omron says the Hawk MV-4000 has “exceptional processing capabilities in a compact form factor”, is easy to use, and constitutes a “golden middle” between PC-based devices and the average smart camera on the market.

Omron says the new smart camera could be used in a wide range of industries to streamline companies’ operations.

The HAWK MV-4000 is said to “quadruples the processing power of the previous generation”.

It boasts up to six times the frame rate of its predecessor, achieving real-time trigger response using an FPGA.

Omron says the Hawk MV-4000 builds on the company’s 35-year history of development in automatic identification and machine vision.

The functions of the Hawk MV-4000 include:

The camera incorporates algorithms that can serve applications in virtually any industry, according to Omron.

Users seeking high-quality images and a high level of configuration flexibility will appreciate this camera’s wide array of sensors, ranging from 0.3 MP to 5 MP with a pixel size of 4.8 μm.

The system can be optimized for almost any application thanks to these sensors in combination with C-Mount lens options and plug-and-play external lighting.

Automotive applications will benefit from the Hawk MV-4000’s long-range imaging and superior field of view.

The consumer electronics industry will benefit from the camera’s precision gauging and inspection capabilities, says Omron.

All this power and flexibility, says Omron, is “easily applied” using intuitive setup, testing, and runtime user interfaces to program the inspection and to set up communication between the camera and other components on the line.

Omron says its machine vision customers have praised the MicroHawk’s ability to reduce setup time from hours to mere minutes, and the Hawk MV-4000 is no different.

The user interface is image-centric, with “intuitive drag-and-drop programming”.

Reading, verification, and vision tools are “ready to use right out of the box” without time-consuming parameter adjustments.

Although the Hawk MV-4000 is a smart camera rather than a PC-based device, its processing power enables speeds nearly equivalent to those reached by vision systems relying on PC processing external to the camera.

A combination of extraordinary power and speed in a compact industrial package puts the Hawk MV-4000 in a category known by vision engineers as the “golden middle” between PC-based devices and the average smart camera on the market.

The Hawk MV-4000 is the first product offering in this new middle tier of Omron Microscan’s machine vision products.

The base-tier MicroHawk, released in November of 2016, is the world’s smallest smart camera with fully-integrated lighting, optics, processing, and communications, and can reach speeds of 1,000 – 2,000 parts per minute.

Our multi-core PC-based systems, constituting the top tier, allow you to connect up to eight GigE cameras simultaneously.

The Hawk MV-4000, a dual-core, FPGA-assisted smart camera, is capable of reaching near-PC speeds with inspection rates from 4,000-14,000 parts per minute.

“With its amazingly fast and flexible imaging, as well as near-PC processing capability, we have blown the lid off the range of applications this camera can handle.

“With user preference moving solidly behind smart cameras because of their localized processing capabilities and high degree of reliability, we see the new Hawk MV-4000 rivaling host-based systems in many industrial applications.”

Omron says this is a milestone in the history of the Hawk family of products, and that its origins go back as far back as 1982.

That year saw the merger of Itran, a builder of high-speed, hardware-based vision systems for general use, and Automatix, a manufacturer of software-intensive vision systems directed towards the automotive and robotics industries.

The result of that merger was Acuity Imaging, the creator of Visionscape machine vision software.

Visionscape software is available in both a standard version and an advanced version, offering an array of machine vision tools in combination with the Hawk MV-4000.