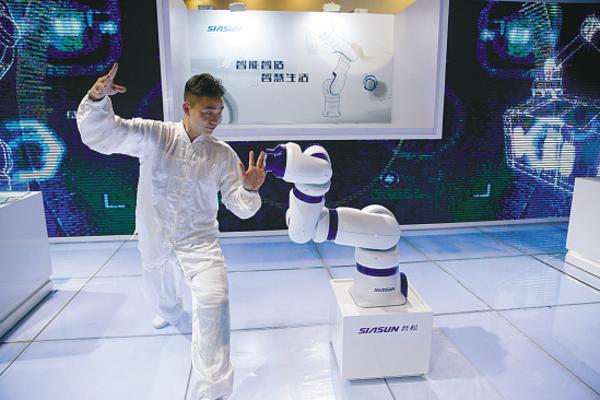 The market for collaborative industrial robotic arms in the Chinese industrial sector is forecast to grow to almost $200 million, according to a report on ChinaDaily.com.

Quoting statistics in the Blue Paper of the Cobots Industry for 2017 – a report produced by Universal Robots and the Shenzhen Gaogong Industry Research Consulting Company – China Daily says the total market size for collaborative robots will exceed $196 million.

Small and medium-size businesses are expected to drive much of the growth. In total, some 12,000 units are forecast to be sold in China by 2020 – although this might sound like an understimate to some.

Probably quoting the research report, the China Daily website says as many as 2,300 collaborative robots were sold in China last year, which was more than double the previous year.

Separately, this year, just one company has made the claim that it has already sold 2,000 collaborative robots in China.

Kawasaki, an established robot-maker which sells a wide range of robots, from large industrial arms to small cobots, says it has sold 2,000 units of its duAro collaborative robot.

Other established companies, such as Yaskawa, Fanuc, ABB, and Kuka are also reported to be doing a brisk trade in industrial robots, some of which are collaborative.

And with companies such as Hanwha and Doosan launching their own collaborative robots and entering the market, the segment will undoubtedly see intense competition going forward.

Doosan is targeting production of 1,000 of its cobots for this year. The company is a huge industrial concern, so could end up using all of them itself, but the new product is also aimed at the wider market, so it remains to be seen how many it sells.

At the moment, Universal Robots is probably the world’s largest supplier of collaborative robots, with more than 10,000 sold so far.

Universal is believed to be the first company which launched this type of robotic arm. Previously, industrial robotics arms were kept caged off and separate from human workers.

Cobots can be used almost like a hand-held power tool, although they tend to be affixed to a worktop of some sort.

This makes cobots accessible to smaller companies which are using them in a variety of new applications, expanding the overall market dramatically.

In comments to China Daily, Jürgen von Hollen, president of Universal Robots, “all businesses can benefit from automation”.

Rethink Robotics is another notable cobot maker which has been developing its market over the past year, although the company has yet to release any figures on sales.

Moreover, there are numerous other companies developing collaborative robots, some of which are in China, which is now the world’s largest buyer of industrial robotic arms of all types.

Siasun, which claims to be China’s largest industrial robot company, also has a collaborative robot in its product range (see main picture).

Although collaborative robots are unlikely to replace traditional industrial robots, which are capable of heavy lifting and other potentially dangerous work, they are finding a growing amount of space on the factory floor alongside them in a variety of applications.