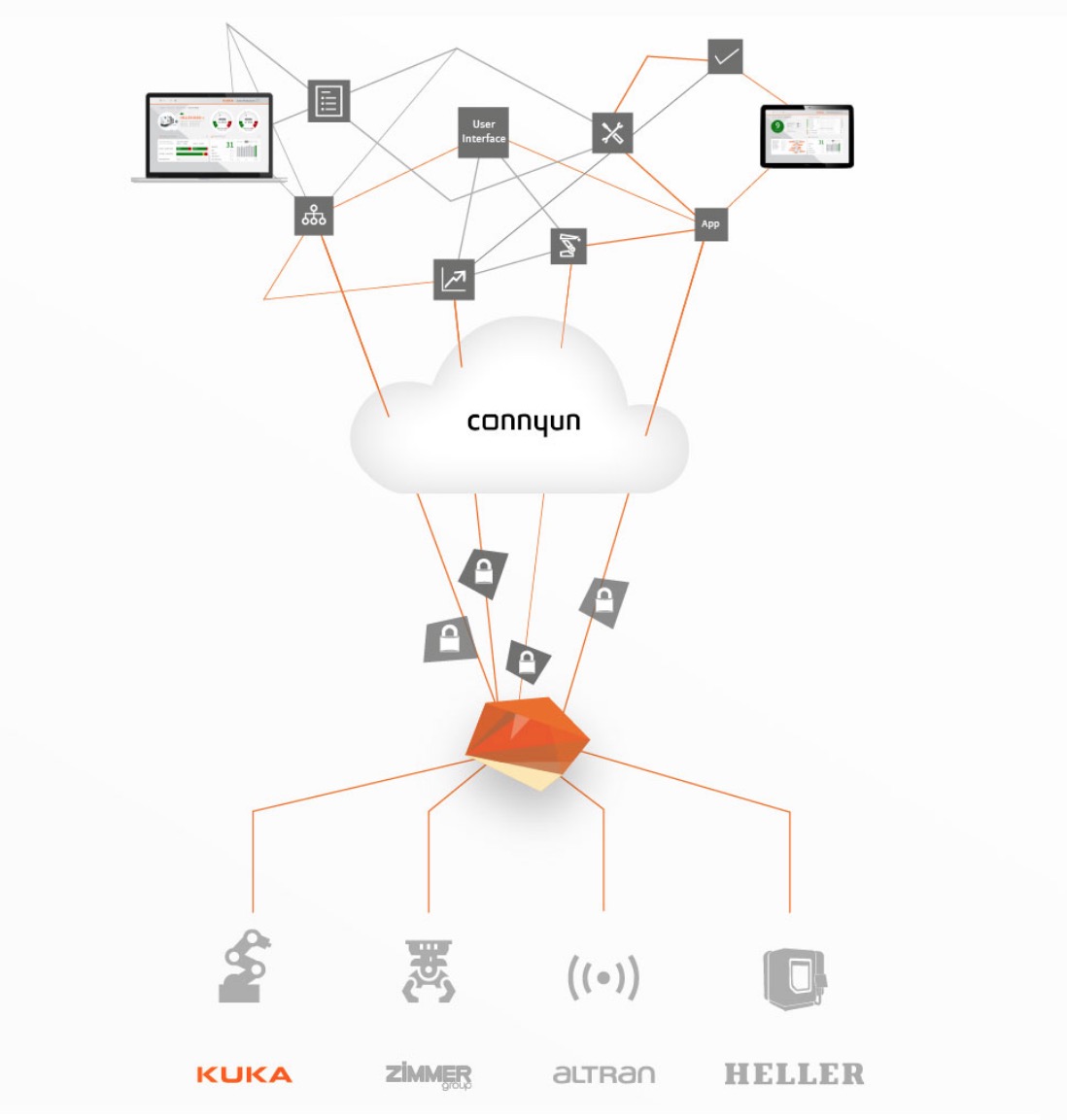 The company is promoting what it calls its “ready2_use packages”, which the company says offers “preconfigured, coordinated application packages that can be integrated quickly and easily into an existing production facility”.

With the fully automated and networked robotic cell with two integrated Heller machining centers, Kuka connects the analog and digital worlds within an internet of things network.

For this demo, a KR 500 L480-3MT robot picks up cast components using pneumatic grippers from Zimmer and presents them to one of the Heller machining centers.

After the components have been drilled and milled, they are deburred in the outer position by the robot and subsequently unloaded.

To enable it to feed parts to both machining centers from a total of four supply stations, the robot is installed on the KL 1500-3 linear unit. In the course of this digitization project, further sensor systems were installed in the machining center.

The temperature and cooling time of the tools can now be checked systematically using the Senseforge from Altran.

Into the cloud with Connyun

The word is a combination of “connect” and “yun”, which is a Chinese term for cloud.

Connyun is now a subsidiary or a separate business unit of Kuka.

Kuka says the connection of the analogue environment to the digital world is established through the networking of all relevant components with each other and with the Kuka Cloud.

This means that all active components of the cell are integrated into the Kuka SmartProduction environment, claims the company.

The data are collected in the Kuka Connectivity Box and forwarded to the cloud.

Services such as authentication, data processing, predictive maintenance and evaluation of events are performed in the cloud.

All data from the machines, machining spindles, robots and tools are displayed in “clearly structured dashboards”, says Kuka.

In this way, operators, maintenance personnel and management have a complete overview of the production process as well as full control – at any time and from any location, claims Kuka.

Kuka uses a modern, Industrie 4.0 architecture for networking the production cell with CNC machines from Heller.

Simplified, this architecture can be regarded as comprising four layers:

This layer consists of the real machines and sensors that are used in the production facility and networked with the cloud application.

In the case of the “Heller cell”, these are machines from Heller Maschinenfabrik, Kuka, Zimmer Group and Altran Group.

It serves as a reliable communications interface between the production cell and the IIoT platform.

Firstly, Kuka’s Edge Controller is capable of plug-and-play communication with the systems using modern standard protocols, such as OPC/UA or MQTT.

Secondly, the Kuka Edge Controller can also be used for interfacing brownfield systems, as it is capable of modular expansion with individual protocols.

The applications include asset management, condition monitoring and preventive maintenance.

The IIoT services are ready-to-use modules for IIoT solutions, such as manufacturing machine learning, manufacturing analytics/big data, rule engines, event management and the creation of a workflow.

The end user can access the user interface by logging on in the web browser, making it easy for the user to work with the data.

The Heller cell is accessed via an overview screen, and the user can then navigate to the individual systems.

In addition to the overview of the system status, functions such as a shop floor plan and the KPIs of the individual production cells are offered here.

The user interfaces can be adapted flexibly to specific customer requirements, claims Kuka.