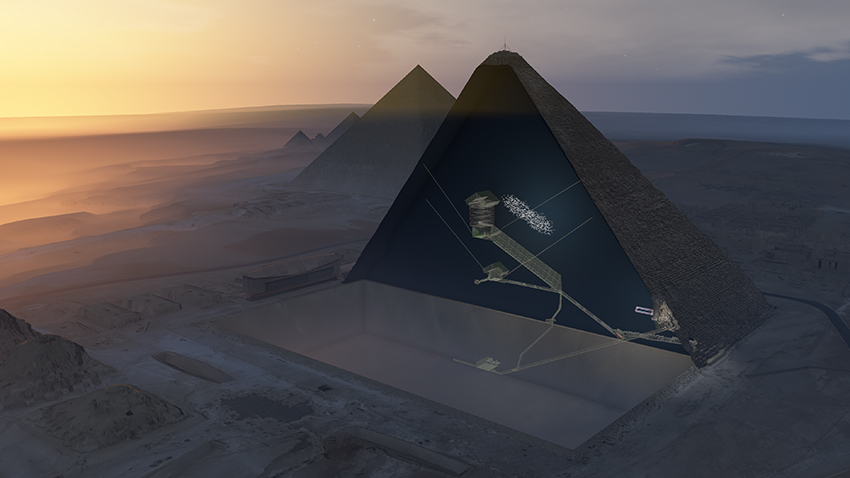 Launched in October 2015, the Egypto-international ScanPyramids project uses non-invasive and non-destructive detection techniques to scan the Egyptian pyramids trying to uncover their secrets.

Designed and coordinated by the Heritage Innovation Preservation Institute and the Cairo Faculty of Engineering, this project is a continuation of previous research by Dassault Systèmes.

After discovering the beginning of a corridor behind beams in October 2016, ScanPyramids has just revealed in the scientific journal Nature, the presence of a large void in the Great Pyramid – also known as Cheops or Khufu Pyramid – called “ScanPyramids Big Void”.

This 30-meter-long chamber – which can be seen in the main picture – is comparable in size to what is known as the Grand Gallery.

This is an important discovery as no major architectural structure had been found inside the Khufu Pyramid since the Middle Ages.

La Fondation Dassault Systèmes and Emissive provide technology support and expertise to the HIP Institute and Cairo University, which planned and coordinated this multidisciplinary adventure with a virtual reality experience that would bring these discoveries to life.

ScanPyramids is one of the projects selected by La Fondation Dassault Systèmes.

The foundation aims to transform the future of education and research by harnessing the powerful learning and discovery capabilities of 3D technology and virtual universes to bring multidisciplinary teams together in collaboration.

Dassault Systèmes says that it was “thanks to the powerful experience and setup imagined and developed by Emissive” that the immersion offers a better understanding of reality – in this case the inside of the pyramid.

It enables collaboration and pushes the limits of knowledge, it says. Discovering inaccessible spaces becomes possible for everyone including students, researchers and the public.

A virtual reality research laboratory to imagine the future of collaborative immersion in the cultural and educational fields has been created at the Architecture and Heritage Museum – Cité de l’architecture et du patrimoine – in Paris.

This prototype virtual reality experience transports groups inside the Great Pyramid where they can move around and explore discoveries in an immersive environment.

Wearing virtual reality headsets, visitors can access the inside of the Great Pyramid for a new type of virtual guided tour – an innovative immersive experience that showcases the future of cultural and educational activities through unprecedented access to famous monuments.