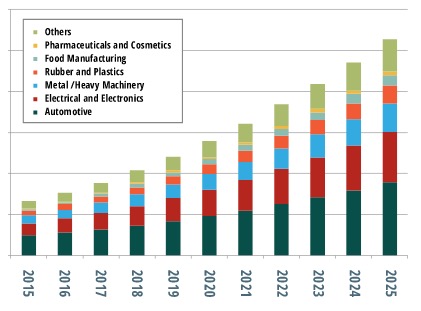 But according to ABI Research, what it calls the “commercial and industrial robotics market” will see revenues increase from $15 million in 2017 to over $48 million in 2025.

It may be that ABI’s numbers relate to specifically to the companies it analysed, listed below.

Rian Whitton, research analyst at ABI Research, says: “The report focused on innovative, forward-thinking companies that are providing, pursuing, and developing exciting, novel solutions to a variety of robotics business cases across a range of industry sectors.”

Many companies are enabling their solutions through artificial intelligence and particularly, machine learning techniques, but many others are also accelerating innovation through hardware.

Examples include Strong Arm’s developments of affordable exo-suits, Hebi’s modular robotics service and Softwear’s development of robots that possess the necessary efficacy to work in textiles.

At the same time, Kespry and Resson are major innovators in the rapid adoption of small unmanned aerial vehicles within the commercial sector.

This has been partially enabled by considerable improvements in the aerial platforms endurance, stability, and payload capacity, but also by lower manufacturing costs.

“The company is competing directly with collaborative robotics leaders Rethink Robotics and Universal Robots by significantly lowering the standard price of co-bots.

“This is necessary for the rapid adoption projected in this sub-group of robots.

“Also of note is the robotics software developer Veo Robotics, whose product is designed to make industrial robots more sensitive to human interaction and more aware of their surroundings, allowing collaboration between people and robots that are far larger and more sophisticated than the current standard of co-bots.”

The list if from ABI Research’s Robotics Hot Tech Innovators report, which is part of the company’s Robotics, Automation and Intelligent Systems research service, which includes research, data, and analyst insights.