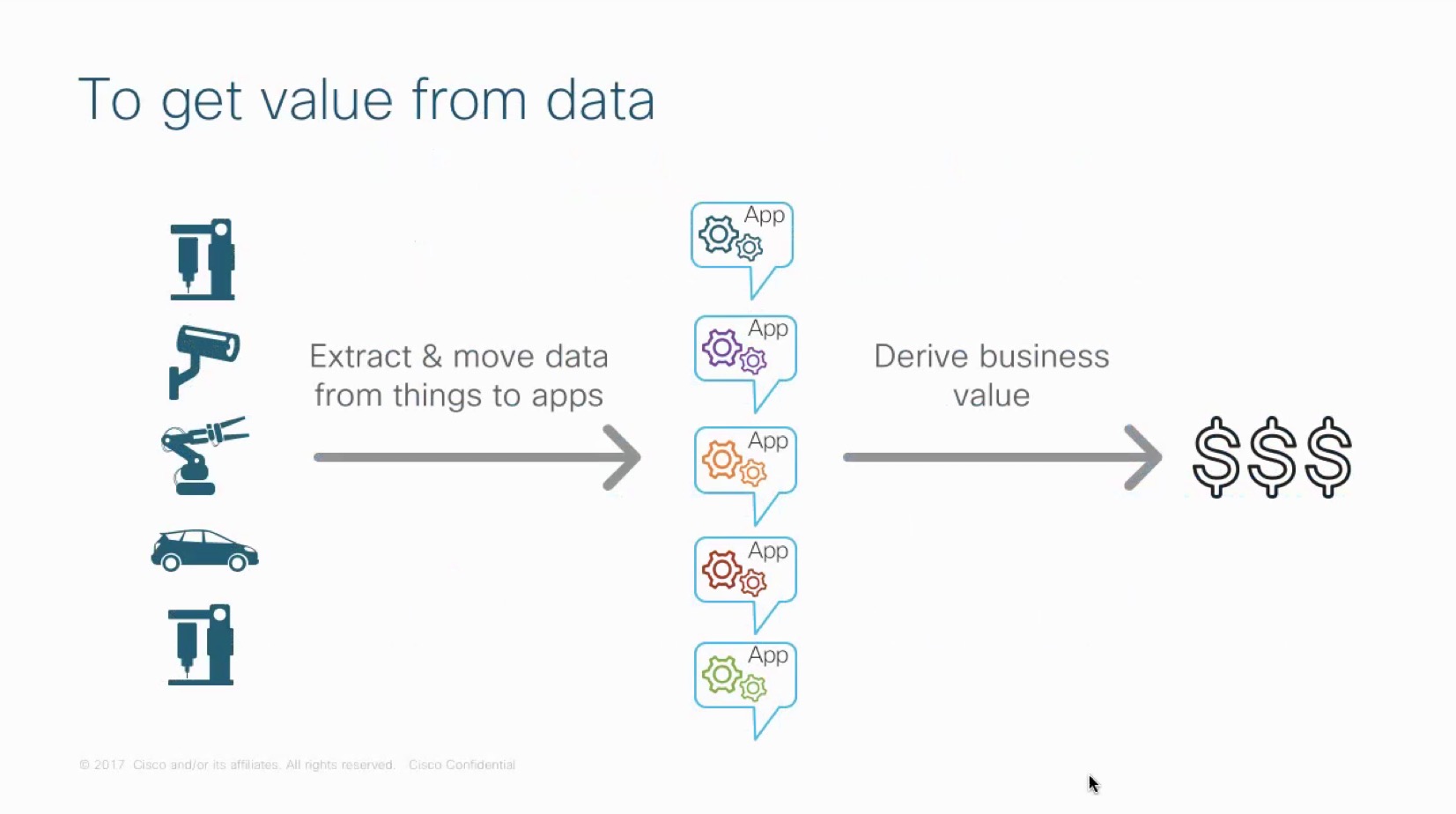 Industrial companies have been attaching tens of millions of sensors to equipment and components in all areas of their operation in order to make the data they collect available to IT.

This merging of OT and IT is not as simple as it sounds – nothing ever is with computers. But Cisco claims it has made the whole process a lot easier with some new innovations, within a platform called Cisco Kinetic.

As well as collecting and managing data from machines or devices, Cisco Kinetic can be integrated with manufacturing execution systems and enterprise resource planning software to provide an end-to-end solution for the modern industrial operation.

Although Cisco Kinetic – being an internet of things platform – can work across many industries, Cisco is prioritising five, which are:

Bui says Cisco has built up a significant amount of its own expertise in these sectors, as well as a large ecosystem of partners which includes many software and hardware companies.

Like many large companies, Cisco is often willing to buy another company which can further or strengthen its business. One of the crucial acquisitions Cisco made in the last couple of years is Jasper, a company which offers something called Control Centre for IoT.

Together, they supplied their IoT solution to companies like, for example, ABB Robotics, which last year used the Cisco Jasper platform worldwide.

In adopting the Cisco Jasper solution, ABB was able to get real-time monitoring data directly from the device level rather than react to phone calls and then go through a lengthy process of trying to find out manually what was happening with the device, as it did previously.

Things have moved on since then, with the launch of Cisco Kinetic, and Bui says: “We typically work with global, multinational companies that have highly complex, highly distributed devices.”

By “devices”, Bui means anything from a human-machine interface to an industrial robot, and everything in-between, including smartphones and tablets, which are increasingly being used in the industrial sector to monitor and manage machines.

“Cisco Kinetic is the new solution we have developed this year, combining Cisco and Jasper technologies,” says Bui. “It has cloud software and hardware components to it.”

Bui says that Jasper is considered the IoT software business unit within Cisco, and the new Kinetic platform is being offered through all of the group.

“We now, at Cisco Jasper, have worked with over 12,000 companies, helping them manage their IoT deployments,” says Bui. “We know, from that experience, companies want to derive value from data they gain when they launch their IoT initiative.

“The internet of things doesn’t change that fact – that you want to get more value from data – but what it does do is change the volume and variety of data coming in.

“All those ‘things’, all those devices, on the internet, are now producing a lot of data, and that is setting up a new world of challenges.”

While delving into details of a manufacturing activity such as track and trace within a facility of 5 million square feet is all very interesting, which is what Bui was doing in the interview, maybe what would be more broadly applicable to readers is how data is managed.

Without wanting to be too abstract, data management – how it is collected, distributed, stored, processed analysed and so on – is probably a subject that applies to all companies everywhere.

But in the industrial sector, where machines are spewing out data that no one knew they had before and sometimes don’t know what to do with, the issue of data management is probably more generally less well understood or established.

The key, says Bui, is to decide what is valuable to you. What data or information is valuable, and to whom is it most valuable?

The 5-million-sq-ft facility Bui was talking about wanted to reduce waste and inefficiencies. How to do that, what data needs to be captured, how to manage and analyse that data, and ultimately how to derive value from that data, are all questions that the Cisco Kinetic platform was designed to answer.

Bui breaks it down in detail. “To get value from data,” she says, “companies must, first, be able to get the data off of those devices, and then, second, get that data into applications where it can be analysed and used to provide the value.

“And what’s interesting is that companies that we typically work with have a lot of things, and each of those things or devices are typically manufactured by separate device manufacturers.

“Also, when they pull data from those disparate devices, and push them into applications, they typically don’t have one application.

“In a manufacturing environment, on a plant floor, you don’t typically pull all the data from the machines and then just push it into an AWS cloud, or an Azure cloud.

“And to compound that, all of those devices and applications are distributed globally.”

As complex as a smartphone

Bui illustrates what she means by likening a device in a factory to a device that we all know – the smartphone. “If you think about how we use our smartphones, and all the data that is generated from there – your location is one piece of data, but you can use that one piece of data and push it into applications like mapping, for example, or a restaurant recommendation app, or ride-sharing, and so on.

“It’s the same in a business context – companies get value from using their data in different ways, and by pushing it into different applications.

“And to add to the complexity even more, the devices can be anywhere globally.

“This sets up a whole new world of challenges that we find with companies.

“The complexity of connecting all those disparate devices securely; the fact that data remains – for the most part, for many companies – locked inside those device sources, and extracting that data is difficult because each device has a different data type, and a different way of extracting it; and so, thirdly, it’s trying to decide how to move that data into the right application, and at the right time.

“And lastly, what we know and what we find with companies is that there’s no programmatic way to enforce data ownership, data privacy, data security.

“Meaning, for example, on a manufacturing floor, you may have a device, and you might want to share back to the device manufacturer data on how the hardware of that device is performing.

“But you don’t also want to share back to that device manufacturer any data that might disclose what that device is doing for you – because that could be proprietary.

“They want to be able to separate the data streams and decide what data goes to whom.”

There are of course many technologies – hardware and software – available to companies which want to create an IoT network.

Apart from individual companies like Cisco, one of the much-talked about approaches is to go open-source and mix and match a variety of hardware and software into one integrated system.

It’s easier said than done, of course, but for smaller operations, it might be possible and may even be preferable. If, however, you have a sprawling network that spans continents and includes hundreds, thousands, or even hundreds of thousands of devices, pick and mix might get a bit challenging.

Which is where companies like Cisco can find their element.

“Cisco is a company that understands how to connect devices on a network, how to do it securely, and how to monitor and manage that,” says Bui.

“We’ve been doing that for quite some time with our existing Cisco hardware solutions.

“That solves the first challenge, which is the complexity of connecting, monitoring and managing those devices.

“And that’s where we looked at that market need, and said, ‘Look, an IoT data fabric is needed’. Meaning, a platform is needed to help companies manage the other three complexity steps on that.

“And that’s where Cisco Kinetic comes in. It’s a system of distributed software that helps companies extract data, analyse that data, and move that data to all the right places at the right time.

“And just to put into context the Kinetic platform, there are three core modules in the platform.

“There is a gateway management module, which essentially allows companies to extract data.

“So what happens on a factory floor is you will put in Cisco gateways, you will connect your various devices on that manufacturing floor to those gateways.

“And we have this gateway module that can then extract the data from all those different device types and put it in a normalised data format.

“So the first module is the gateway management module that helps companies extract the data.

“The second module we call our ‘edge’ or ‘fog’ processing module, and that allows companies to do some data analysis at the edge, before even pushing it up to the cloud, should a company want.

“A good example – not in manufacturing, but an extreme example, so I like using it – is in oil and gas.

“You might want to say, ‘Look, there’s some data analysis that we want to happen at that oil rig’. So, if it’s over-rotating or over-pumping by X hundred per cent, don’t wait to collect all 16 terabytes of data, push it to the cloud, make that decision and push back to that oil rig, ‘Shut down’.

“You could set a command, at the edge, ‘If it’s over-pumping, I want you to slow that oil rig down right then and there’.

“So that’s what the edge or fog processing module does. It takes that extracted data, and can make some policy decisions on the edge before pushing it to the cloud and to the other apps.

“And the last module is a data control module, which is a module that helps you decide where, when and to whom to send all those various forms of data.

“So, going back to that car painting data I referenced, you might have a robotic arm that spray paints cars.

“So, three modules: gateway management for data extraction; an edge and fog processing module for processing control edge at the edge, should you want; and then a data control module that helps you enforce your data delivery policy or process.

“And, of course, all of Kinetic is based on the Cisco hardware network, our traditional routers and gateway management – all that hardware, all the connectivity of those devices are Cisco solutions.”