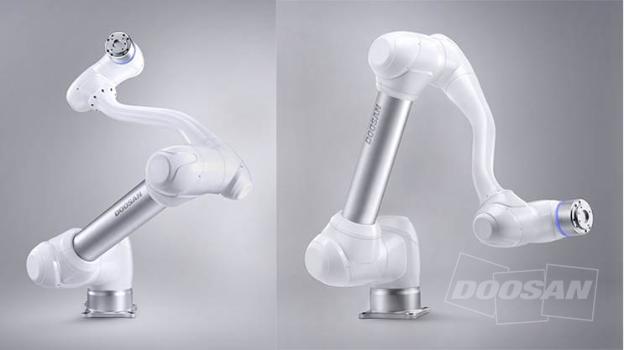 South Korean industrial giant Doosan is expanding into the collaborative robot market, which it expects to grow “at a rapid rate on the back of the fourth industrial revolution”, and has revealed a new cobot which it has dubbed the M1013 (main picture).

The company established Doosan Robotics in 2015, and recruited what it says are the industry’s top researchers and developers to lead its research efforts.

In that time, Doosan Robotics has developed four collaborative robot models with its own in-house technology and exhibited them for the first time at Robot World 2017.

The company notes its interest in the fact that, previously, it was necessary to install safety fences in workspaces being shared by humans and robots, but collaborative robots can work alongside humans without barriers.

In the shared workspace, humans and robots can perform their tasks in the most efficient way, and thus increase productivity.

In addition, the robots’ compact and lightweight features make it easier to automate the manufacturing process without the need to make major changes to the production line structure.

Doosan says it developed its robots’ hardware and software in-house – incorporating elements based on the precision machining and control technology from its machine tools business, the hardware design and engineering technology from its excavator and industrial vehicle business, the research and development capabilities of Mecatec, which produces industrial robots, and the professional knowledge of prominent scholars and experts in the industry.

A Doosan Robotics official says: “Doosan’s collaborative robots meet the performance and safety levels that are on par with or exceeding those of the top-tier companies.

“Yet, compared to the equivalent-level products offered by our competitors, we have overtaken them in terms of cost competitiveness and other benefits such as easy-to-use features.

“We have also received high marks in the industrial field test.”

Another advantage of new-generation collaborative robots is that, by using an application, “anybody without professional programming knowledge can easily install and program the robots, so maximizing their benefits while working side by side with them”, says Doosan.

Doosan boasts that its industrial robots are capable of “world-class performances” – demonstrated by the robotic arms’ maximum work envelope of 1.7 meters, a payload of 15 kilograms and an efficient collision detection sensor that guarantees the safety of nearby humans.

By accomplishing a repeatability of ± 0.1 millimeter, the robots can provide precise work support, and the high-performance, multi-axis torque sensors make the machines suitable for carrying out more sensitive processes that previously required the dexterity of human hands while enhancing safety.

A Doosan Robotics official says: “Without the torque sensors, we had to estimate the force through the motors, but now the force delivered to the six axes can be more accurately measured using the sensors.

“Our robots can sense even minimal contact with surrounding objects and an emergency stop can be initiated, resulting in maximized safety.”

With the advent of the fourth industrial revolution, the global market for industrial robots is expected to grow at an annual rate of 8 percent on average – from about $13 billion in 2016 to $20 billion in 2022 – according to some market research firms in the US.

The collaborative robot market, among others, is expected to grow at the fastest average annual rate of about 68 percent, reaching 6.6 trillion won by 2022.

As collaborative robots are emerging as a solution to address many of the limitations industrial robots had in increasing automation in manufacturing, many global robot manufacturers in Japan, Germany and the US are competing against each other to dominate the market first, and Korean companies are also expanding their presence in the market.

Doosan Robotics plans to launch the mass production of its collaborative robots within this year while focusing on developing sales channels, and aims to hit the market next year.

Doosan official says: “After analyzing the growth potential, competency potential and business feasibility, we have identified a great deal of new opportunities in the collaborative robot market and decided to launch the new product development project.

“We are firmly committed to establishing a leading position in the market through our continuous R&D efforts and investments, and to lead the growth of the market.”