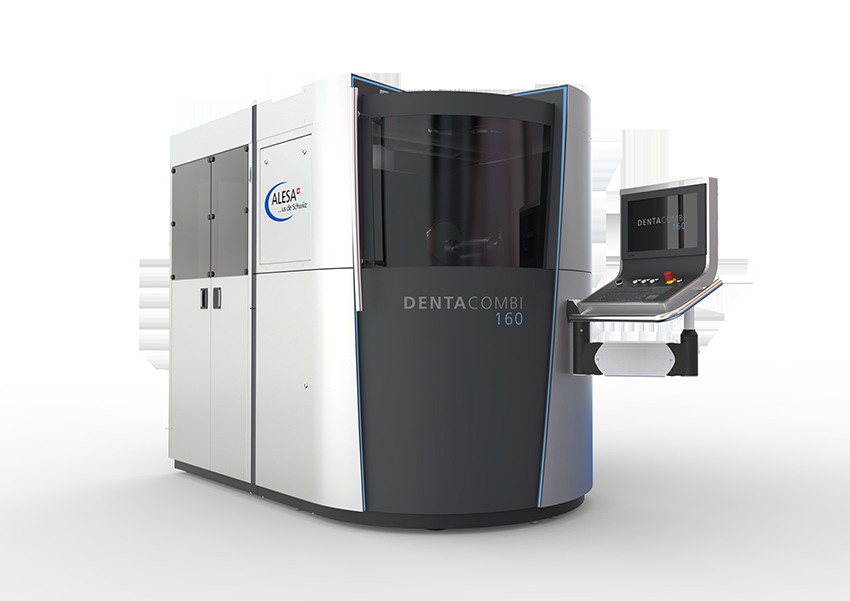 By Martin Rupf, of Kollmorgen

Saw blade manufacturer Alesa has developed its own grinding machine with Washdown servo motors from Kollmorgen with single-cable connection technology.

Among their other applications the finely ground circular saw blades are used in metal processing centers.

Sintered tools have a reputation in metal processing for being particularly hard-wearing and for maintaining their sharpness over a long period.

However, processing saw blades, drills, and milling tools proves to be time-consuming as a result of their particular hardness.

This is why the saw blade professionals from Alesa in Switzerland started their own development process to design a grinding machine for circular saw blades.

With saw blades this involves getting right down to business – particularly when these are used in high-precision processing centers for metals.

There are wide varieties of products available.

These range from saw blades made from HSS steel to elaborate material structures from a sintering process.

Alesa ensures that the right sharpening is in place for both product lines with the Denta Combi 160.

Christian van Rijs, owner of K. Brunner and the “spiritual father” of Denta Combi, says: “Grinding this hard material involves the major challenge of dissipating the generated heat through water or oil as effectively as possible.

“The saw blades are so sensitive that temperatures at the edges of more than between 180 and 200 degrees Celsius can result in immediate changes in material performance.

“The structure deteriorates and the hardness reduces considerably.”

Van Rijs uses a high-pressure oil jet in the Denta Combi so that the teeth remain as cool as possible during chamfering. “Machines simply tolerate oil better than water. Cooling water has all kinds of additives in it which place a strain on the material and cause the machines to suffer,” he says.

However, as water is more effective than oil in absorbing the friction heat during grinding, the machine engineer has to increase the pressure for the oil supply – and also to integrate a CO2 extinguisher into the system.

In order to prevent the positioning drives inside the processing center from adverse damage through contact with the cooling liquid, the special-purpose machine builder from Gränichen in the Canton of Aargau uses specially coated synchronous servo motors from Kollmorgen – the Kollmorgen AKM Washdown range with a coating made from a two component epoxy resin.

This protects the light gray units securely from the impact of corrosive chemicals.

The extremely smooth surface also ensures that liquids are able to run off without residue.

This makes cleaning the interior easier in Alesa’s new system, as the drive technology causes less contamination and neither the cooling liquid nor the grinding residues stick on a permanent basis.

The performance of the Washdown-design AKM servo motors is generally so robust that they are not affected by salt spray either – which is why they are even used in offshore applications with long service lives.

New technology that is easy to implement

The role of AKM Washdown servo motors in the tool grinding machine for circular saws with blade diameters of up to 160 millimeters involves three-dimensional positioning of the diamond grinding wheel via an XYZ multi-axis system.

The grinding wheel itself is driven by a high-frequency motor.

The workpiece is also adjusted notch by notch in a rotational axis to the grinding wheel by an AKM Washdown motor.

This allows the workpiece to be completed within just a few minutes.

Van Rijs had previously used boards developed by him to control these CNC processes, but now uses standardized processors and powerful Ethercat communication.

“This made it very easy for me to transfer the existing software – which contains our essential knowledge and expertise – to the modern hardware.”

This implementation was required in particular because older boards with ISA-bus communication were becoming increasingly difficult to procure.

The decision to use the AKM servo motors from Kollmorgen for the new grinding machine was down to the perfect coordination with the AKD servo drives as well as the existing Ethercat system bus communication.

The simple parameter settings and the fine-tuning options with the Kollmorgen Workbench were crucial factors in terms of the controllers.

The simple configuration was a real advantage in engineering, particularly in combination with the CNC developed in-house.

The AKD servo drives can also be flexibly combined with components from other manufacturers, which is an absolute benefit in special-purpose machinery construction.

At this point the managing director of K. Brunner was generally on the lookout for a system partner that has a set of modules for the servo drive technology that is as extensive as possible – both in terms of output as well as the options such as Washdown coating.

“That’s the best solution for us,” says van Rijs.

He notes that as a special-purpose machine builder it is important for him to obtain both small as well as large motors from one manufacturer – with this scaled on a continuous basis.

The whole project involves intensive collaboration on the engineering side, which has developed into a true partnership as a result of other projects in the past.

Single-cable connection technology is absolutely beneficial
One further result of the co-engineering is the space-saving structure for the servo drive technology for the motion control.

As the Denta Combi 160 is designed to be a compact machine, the room available for the installation is also correspondingly tight.

“Connecting the motors using just one single cable is an enormous benefit for us as we only need to connect half the quantity,” explains van Rijs regarding the use of the AKW Washdown servo motors with single-cable connection technology.

Four positioning drives, the high-frequency spindle for the grinding wheel as well as several measuring systems produce a “bunch of cables… If we are able to halve this number with the drive technology then we save space and can also be considerably more flexible.”

He says that flexibility is a major concern for machine builders, “since the cable loops also need to be moved with the rest of the system. This makes the overall design more complicated”.

According to him each additional cable also means an increase in the risk of failure within MTBF calculations.

“A nice flat cable loop lengthens the service life,” says van Rijs, and he also ideally wants the cables to become thinner, with Kollmorgen already featuring slim designs today with its hybrid cable and no more than 11 millimeters in diameter.

However, the managing director of K. Brunner still sees potential for further developments.

Van Rijs says: “If I use motors with relatively low output for positioning drives and these use just under 2A electricity, then cables that are maybe just 6 millimeters thick are enough, because the individual wires measure just 0.25 squared.

“We’re just used to building machines that are as small as possible. That’s our specialty.”