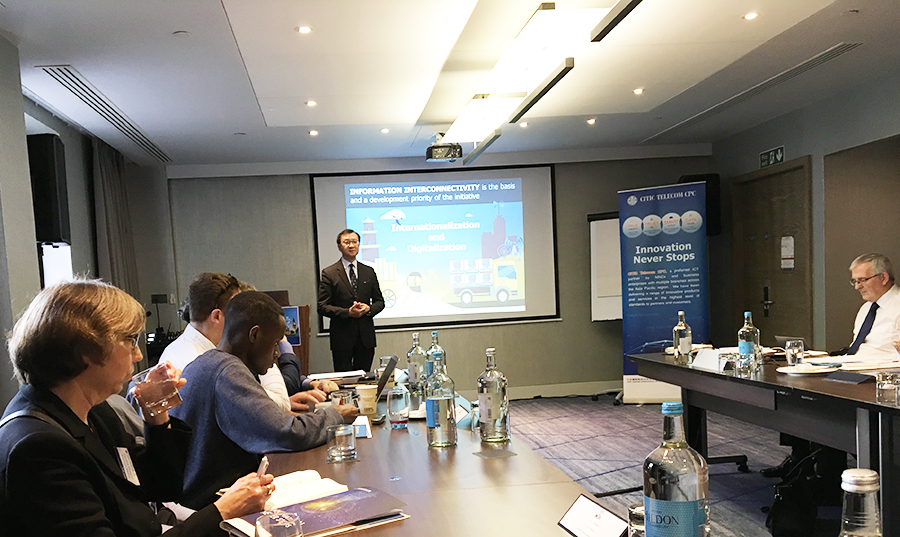 Stephen Ho (main picture), CEO of Citic Telecom CPC, who presented the new developments at a press conference in London, says the company is “accelerating internationalization and digitalization”.

Ho says: “The company’s new name is meant to convey a sense of being a single unified company with aligned capabilities.

“It not only leverages the excellent brand reputation of its parent company domestically and overseas, but also more accurately reflects the company’s enhanced business focus on Europe and the CIS telecommunications arena.

“Furthermore, we are starting a new era by expanding our coverage to 140+ points of presence in 130 countries which covers critical locations along the ‘Digital Silk Road’, providing a shorter path and direct connect to the Greater China region.

“This helps and empowers our enterprise customers and carrier partners to expand their global footprints by leveraging our top-of-the-line infrastructure, solutions and services, local expertise and ramping up our capabilities in new ICT areas.”

Connecting the world to the ‘Digital Silk Road’

The “Digital Silk Road”, connecting Asia, Europe and Africa, is also known as China’s “One Belt, One Road” economic cooperation initiative, and has significant potential from infrastructure financing.

It is backed by the European Bank for Reconstruction and Development to establish a strong focus on attracting new sources of investment into different countries. High growth areas along the Digital Silk Road include Russia, Eastern Europe, Central Asia, Kazakhstan and Azerbaijan.

According to data from Mergermarket, Chinese enterprises’ mergers and acquisitions in Europe and North America have experienced impressive growth – accounting for $78.9 billion and $37.9 billion respectively in the first half of 2016, a year-on-year increase of over 300 per cent.

The top five destination countries – Switzerland, the US, Germany, Finland and the UK – attracted more than 77 per cent of M&A value.

Ho says: “Accelerating internationalization and digitalization, the markets along the One Belt, One Road route offer huge development potential. Information interconnectivity is the basis and a development priority of the initiative.”

Citic says it is establishing itself as a key global player in managed ICT services, and can now support a greater number of enterprises along the Digital Silk Road, tapping into Citic Telecom CPC Europe’s “vast network resources” in Central and Eastern Europe.

Ho says: “Our mission to connect the world to the Digital Silk Road is closer to fulfillment, as we support customers to invest and operate in Central Europe, Eastern Europe and Russia.

“The acquisition of Citic Telecom CPC Europe – formerly Linx Telecommunications – fits very well into this strategy and now we have a particularly powerful proposition for our customers.

“In Europe, our partners have expressed how beneficial the acquisition is to them, because some of the services that they are enjoying in Asia are now migrating to this new and exciting area, offering a host of new investments.”

In the last six months, the company says it has “successfully enhanced” its service infrastructure with the latest technologies.

Ho says: “Our motto, ‘Innovation never stops’, has two sides to it. Internally, we look to our colleagues and employees who are driving innovations because innovation is part of who we are as a company.

“We don’t just focus on technologies and processes as we are the whole package, and we want to show this to our customers.

“Externally, we want our customers to know that we are not stagnated.

“We are a company that is continuing to move forward in this ever-changing and tremendously exciting era.”