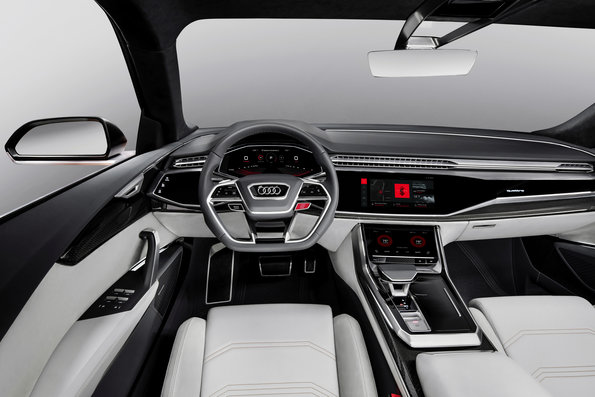 A human-machine interface is a computer screen through which a human can control a machine. It can be a screen on a tablet computer or a desktop computer, or even a wearable, like a smartwatch.

The majority of HMIs in the industrial sector take the form of tablet computers, though there are also many desktop HMIs, and an increasing number of developers are releasing wearable HMIs, although they are few in number at the moment.

The reason why mobile HMIs seem to be favoured is that they can be located near the machine, or the user can be near the machine when using the device, to either directly control it in realtime or programme it to perform whatever operations at a subsequent time.

But in this article, we’ll be looking at HMIs in cars, a growing market which is seeing ever more sophisticated technologies and much more competition than ever before.

And while to some readers, HMIs may mean mobile tablet computers, what we’ll mostly be looking at is, in old-fashioned language, car dashboards, or cockpits as some prefer to call them, although cockpits used to be in planes, so we’ll stick to dashboards, in connected cars.

A new piece of KITT

Some readers may be old enough to remember when David Hasselhoff starred in a TV show called Knight Rider, way back in the early 1980s, which featured a talking car called KITT.

While KITT had a highly advanced and very impressive dashboard, or HMI, actual real-world technology – with its growing number of connected cars – has now surpassed it.

This means that, in some ways, the market for in-car HMIs is entirely new.

Until now, drivers have not been able to manage and control their cars through the dashboard to this extent.

In the past, you may have used the HMI in your car to control the heating or radio, now you can have maps and other information displayed on the interior of your windscreen using augmented reality.

If such technology becomes popular, we may see car windscreen interiors which display information about traffic, weather, and other information that, arguably, could help the driver make better driving decisions without compromising safety.

But even without moving to the big screen, dashboards provide technology developers with plenty of space to work in.

And even from the point of view of someone who isn’t an engineer, the dashboards in most cars still look like they could be changed or refined much more.

As everything including cars become computerised, it’s easy to imagine that car dashboards will dispense with all the sliders, buttons and other physical controls which are, in a way, remnants of the mechanical systems of yesteryear.

Computers enable developers to virtualise those buttons and controls so, theoretically, all that would be left on the dashboard is a big screen.

This is exactly many car manufacturers are working towards.

Among the first, or perhaps the first, to unveil an entirely virtualised dashboard is Audi.

Audi says the interface “seamlessly” integrates the Android operating system and provides a range of information services such as maps, messages and calls. And, of course, music.

In choosing Android, Audi has aligned itself with the Google developer community.

The virtual dashboard can use either maps from the Here database, which Audi is a part of, or it can call on the Google Maps database.

The whole platform is open so any developer can build an app and drivers may download them into their car dashboard just like they would with their smartphones.

Virtual dashboards are not new, and automakers started developing them around the time the first smartphones started coming out several years ago. ut whereas

But whereas before the virtualisation of the mechanical buttons and switches were limited, now the whole dashboard is virtualised – there are no buttons or anything left but a touchscreen.

This means that device suppliers such as Garmin and TomTom, which supply small HMIs to view maps and get directions, will have to integrate with the automakers’ new dashboards – perhaps as apps – if they want to be part of new in-car systems.

Alternatively, they could link up with other suppliers to the car market such as Bosch, which TomTom has done, and become part of their integrated offerings.

Another possibility is integrating additional functions to their devices such as augmented reality, or projection.

The device the companies showed included a small screen which showed illustrations of the road ahead and incoming messages. It’s called a heads-up display, or HUD, and it’s another entirely new and growing market.

HUDs can do at least some of the things that Audi’s dashboard can do, but within a separate, subsequently-acquired device that is not integrated with the car dashboard at the manufacturing stage.

This type of device would be useful in cars on the market at the moment, rather than the newer ones with virtual dashboard Audi and others are developing.

And while Audi has gone with Google and Android, Harman was recently acquired by Samsung, which in some accounting periods sells more smartphones than Apple.

Samsung bought Harman because it wanted an entry point into the auto market, and Harman is what’s called a Tier 1 supplier to the automotive sector – which means it supplies directly to the original equipment manufacturers. Tier 2 companies supply to Tier 1 companies, and so on.

Clearly Samsung, like Google, Apple and other smartphone manufacturers, sees automotive as a big market opportunity, and since Harman is a big supplier of in-car entertainment systems, so it’s not surprising that it’s paying an estimated $8 billion to buy the company.

Google, meanwhile, has licensed its self-driving technology to Fiat Chrysler, one of the largest automotive companies in the world.

And Google, for those who might not know, manufactures a smartphone called the Pixel.

Apple has had an in-car user interface system called CarPlay for about seven years. It can now be found in a variety of cars, including ones built by Audi, BMW, Renault, Lincoln and many others.

And Sony, which has never been directly involved in this market before, looks like it might be getting ready to launch “Xperia on wheels”.

Xperia is the brand name for Sony’s smartphone system, but the company could launch it as an automotive product, similar to what the other smartphone manufacturers are doing.

With Sony’s renewed interest in robotics, it seems more likely that the electronics giant will might be looking to link up with an automaker.

Sony does, of course make in-car music systems, some of which may well be integrated by the manufacturer, but it may now be looking to transfer its smartphone know-how to develop devices and systems which offer more functionality – maybe even a car of its own.

What’s in the dashboard?

It’s probably too complicated a subject to go deal with in one article to any great depth, but, even though a virtual dashboard might not have anything but a screen for the user to see and touch, what’s behind the dashboard is a hugely sophisticated set of systems which involve electronics and computing of the most advanced kind.

IHS Markit estimates the car dashboard market to be worth approximately $37 billion, but it still has a long way to go, since the research company forecasts it will almost double to $62 billion by 2022.

And with it being so complicated inside there, automakers are looking to simplify the process of integrating the many different parts from the variety of suppliers they rely on.

Reuters quotes IHS Markit’s principal automotive analyst, Mark Boyadjis, as saying: “The complexity of engineering ten different systems from ten different suppliers is no longer something an automaker wants to do.”

Boyadjis estimates that automakers will reduce the number of suppliers from around 10 to two to three in the future.

And who’s to say the those two to three suppliers won’t be from Silicon Valley rather than the traditional Tier 1 automotive supplier category?

The prospect of being replaced by computer tech giants is one that has apparently invigorated the Tier 1 automotive suppliers who are all racing to adopt newer, more computer-oriented, more software-oriented development models – in addition to the mechanical engineering systems they have been using for decades.

The advantage the traditional suppliers have of course is that they have more experience of the mechanical side than their would-be challengers.

Dashboards which show maps and other things that a smartphone or a HUD can show is all very well, but eventually they’re highly likely to be displaying real-time information about the inner workings of the car, perhaps to see if it needs any maintenance work, or to optimise the driving experience.

Here, too, the Silicon Valley is thinking outside the box, as they say.

Apple, for example, has reached an agreement with General Electric to enable the development of Predix apps for iOS – meaning iPhones and iPad.

It seems natural to think the next step, or one of the future steps will be to enable the integration of those apps into CarPlay.

And since apps built on Predix is mainly used to monitor and manage industrial machinery, it would seem a suitable platform for the development of apps that do the same with cars.