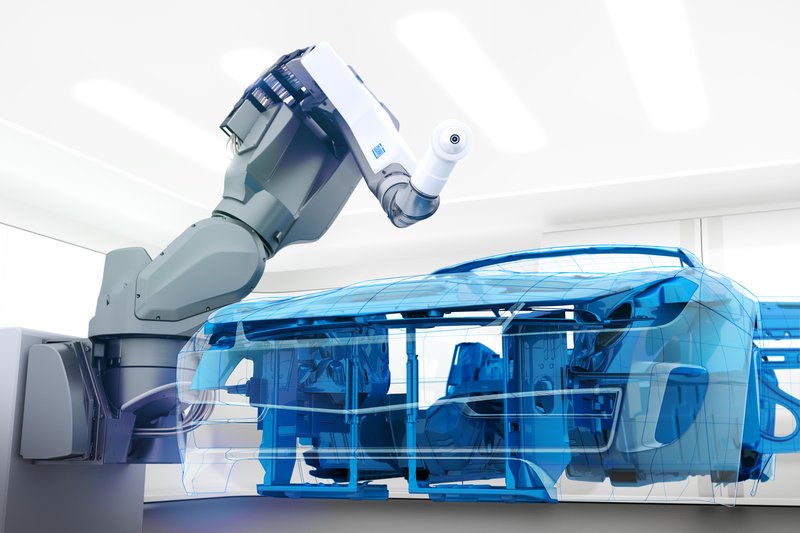 Painting was one of the first applications for industrial robots, but it didn’t start well.

When they were first introduced in the 1980s at General Motors’ Michigan plant, the robots initially painted each other, according to an article on industrial robot history, published on Robots.com.

The complexity of painting is probably under-estimated because humans can do such tasks with relative ease.

But even for humans, learning to paint to the level of uniformity and quality required for a top automotive manufacturer can take years.

Before robots came along, all painting was done by human workers, and whatever your opinions about artistic integrity, it certainly took longer.

According to an article on Body Shop Business, in the 1920s, it took almost two months to paint and dry a car before delivery to the customer – and even then, the paint wasn’t durable and started discolouring within a couple of years, partly because the varnish would wear off too quick.

Around that time, industrial giant DuPont discovered and commercialised a new lacquer which provided the solution to the durability and discolouration problems for around 50 years.

Nowadays, the painting and coating process used by automotive manufacturers tend to involve several stages, and the type of paints they use include what are called “pearlescent”, which was said to be first developed by Audi, some time in the 1950s.

And while the original equipment manufacturers might do all their painting on site, there is a huge number of used cars whose owners subsequently get them painted at a body shop.

Maaco, which is believed to be one of the largest body shops in the US, says it has “helped more than 20 million customers with their auto painting and collision repair” requirements.

Maaco seems to mainly use human workers to deliver its paint services, which themselves have many levels, from basic to platinum. It may use robots, but we have yet to confirm this.

There are, however, newly emerging body shop companies which definitely use robots in their painting service offering.

Symach, an established Italian company which launched its body shop operations in the US a couple of years ago, uses robots mainly for the drying process.

The company had sold 2,400 drying robots to body shops by the time it reached the US, according to a report in Auto Body News.

And its sales pitch sounds impressive. “It is truly a body shop in one box,” says Osvaldo Bergaglio, CEO of Symach. “One multi-skilled technician can perform an average of four to six repairs per day without moving the vehicle.”

As might be expected for a drying system, Symach’s “FlyDry” robots don’t look like the typical articulated robotic arms familiar in industrial plants.

Last year, Symach supplied 3D Auto Body & Collision Centres with a drying system which is said to reduce drying times “from almost an hour to seconds”.

One of the companies which partners with Symach is BASF, the conglomerate which could perhaps be compared to DuPont.

There are numerous companies which specialise in supplying robotic paint cells, and innovative solutions are being developed.

Among them is another Italian company called CMA Robotics, which, as well as offering solutions to the automotive industry, also seems to have found favour in the boatbuilding sector.

And there’s also the Easy Paint Robot company, based in France, which provides robotic painting solutions for a wide range of industries, including automotive.

For large OEMs, especially automakers, an in-house paint line is a well-established component of any production system.

The companies they turn to tend to be the top robot makers, which have pre-configured paint robots which can be customised for each application.

Some of the leading industrial paint robot suppliers include:

There are others, of course, so this is by no means a complete list, but these manufacturers look to have broader ranges and newer solutions.

The newest solution is probably the one from ABB, which says it has produced the “world’s first” digital automotive robotic painting system, as featured on this website recently.

Simply put, the ABB robot uses a new atomiser – or nozzle for the paint – and, perhaps more significantly, is connected to ABB Ability, the company’s industrial internet platform.

And Dürr has partnered with automaking giant BMW to develop a robotic painting system for which the companies received some sort of design award.

Dürr has a range of automotive painting robots called EcoPaint which can use “all paint materials”. One of the robots is a seven-axis kinematic system which can be used instead of a linear displacement rail, thereby saving money.

Meanwhile, academic research institution Fraunhofer has demonstrated a new robotic painting system which it claims can save 20 per cent in paint use, 15 per cent in energy consumption and 5 per cent in production time.

The system is called SelfPaint, and apparently relies on the digital scanning and analysing process before the five-step painting and coating process begins.