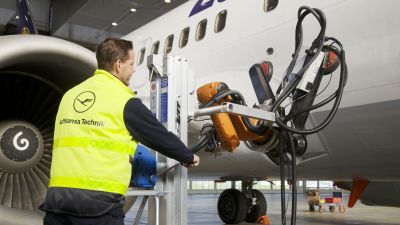 Lufthansa Technik has demonstrated a robot which can scan the outer later of aeroplanes and work at odd angles to help with any necessary maintenance and repair jobs.

Lufthansa Technik generally fixes planes for its parent company Lufthansa, one of the world’s largest airlines, and undertakes work for a variety of aerospace companies.

The new robot is part of the Caire project – short for Composite Adaptable Inspection and Repair – which includes airline industry companies such as Airbus and Lufthansa Technik.

Lufthansa Technik was looking for a way to reduce the amount of time and effort required to determine and repair damage to an aircraft’s outer layer, which is generally made up of lots of pieces – or tiles – of fiber-reinforced composite material joined up using the scarf, or scarph, method of joinery.

Examining each join and analysing it to see whether it needs any repairs was, naturally, a time-consuming – not to say tedious – task.

Now, Lufthansa Technik says the Caire robot is up to the job of scanning to see what needs fixing and then working at a variety of angles – including upside down – to fix any defects.

The company has filed two patents in relation to its invention and is likely to offer it to other companies. Its current plan is to bring the Caire robot into its own operations by the end of next year.

Lufthansa Technik is also working on industrializing the mobile system.

The company says targeted use of the scarf joining robot not only results in cost and time savings, the new procedure also significantly increases quality, since it makes entirely new repair geometries possible.

To make a scarf joint, the robot is placed on a fixing device attached to the component with suction cups.

For this purpose, it scans the damage, identifies the surface and calculates both the form of the scarf joint and the milling path before cutting out the damaged material.

Afterwards, the repair layers are cut to size and inserted into the 3D scarfing surface created by the robot. The newly inserted part is then manually glued to the fuselage and cured.

Lufthansa Technik describes its machine as a “scarf joining robot”, and preparations are under way to put the new system into commercial operation.

The robot demonstrator developed during the Caire research and development project successfully passed all its tests, says the company.

Trials on individual components as well as on entire aircraft proved that both reproducible repairs of damages and purely adhesive-based repairs on critical structures made of fiber-reinforced composites are possible.

In addition, the robot can even be used for mobile repairs, claims Lufthansa.